“I’m not a fighter, I just want a place to stay,” said mother of two Grazel de Vries, who has set out a plot for herself and her family on vacant land in Woodlands, Mitchells Plain.

On Monday evening the area erupted in protest after metro police demolished shacks. Shops were looted and seven people arrested, according to SAPS.

Residents had started demarcating sites on three pieces of vacant land in the area on 25 May, and some had built shacks by 28 May.

De Vries told GroundUp that she and many others had asked to be allowed to remove their own structures on Monday but police had refused.

“I told them I will remove my own structure, because they were not breaking them nicely, but they refused and took away my things.”

“I am sick and depend on a grant. I cannot afford to buy a house for me and my kids. I have been living with my sister’s family for years, I want my own space,” said de Vries.

Another resident, Mogamat Munir, father of seven, said he had been living in a small shack in his in-laws’ house for many years. Munir is unemployed and his wife works as a teacher at a nearby crèche. When GroundUp visited the area on Tuesday he had started rebuilding his shack with the little material he had left

“I am not asking for money, but for a place for me and my children to call a home. How long is this land going to stay vacant while there are people struggling and in need of houses?”

Shop owner Mohammed Omar said his brother’s shop had been vandalised during the protests and he had closed his own shop and hidden in his house.

“I moved from Khayelitsha to here in 2010, running away from the same thing. Here I thought I was safe.”

“We [have been] refugees in South Africa for a long time. I moved from Somalia for the same thing. I was tired of the killings. Fighting is no solution. I was born in a fighting area,” he said. 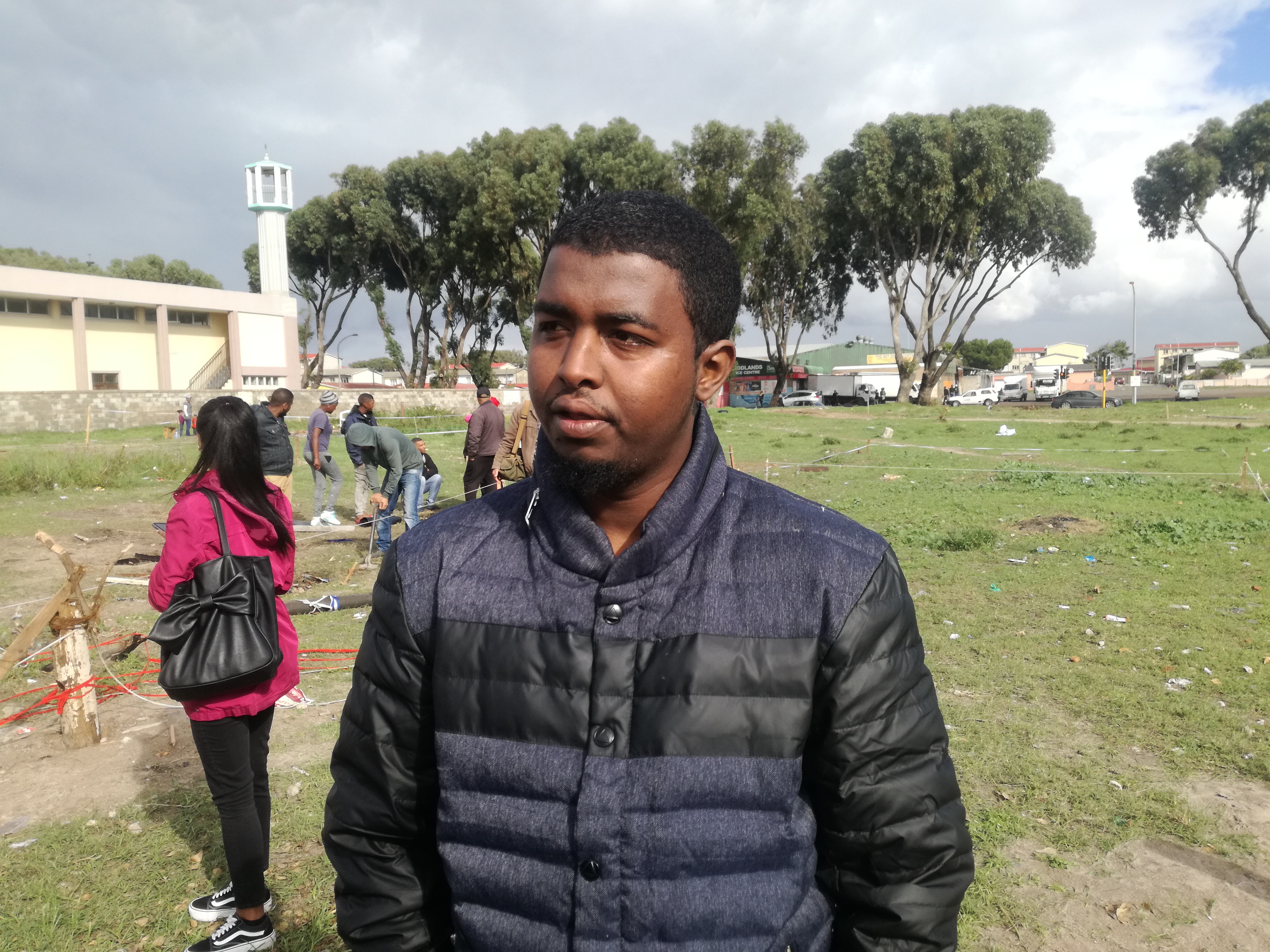 Spaza shop owner Mohammed Omar says he is scared for himself and his family. Photo: Thembela Ntongana

Omar said when the protest broke out on Monday evening the police were outnumbered and could not control the crowds throwing stones at the police.

“I do not feel safe. I have a seven-month-old baby and when they start throwing stones they do not ask who’s inside….I am scared for my family,” said Omar

Mayoral Committee Member for Area South, Councillor Eddie Andrews said police officers had dealt with a crowd of 150 to 200 people “who have engaged in protests since the removal of approximately 20 structures over the weekend”.

“I will be meeting with a delegation from the group this evening,” said Andrews.

A Pick ‘n Pay Express shop owner said he watched his shop being looted as he hid in the strongroom with his employees. All the windows were broken and the shelves were empty when GroundUp arrived on Tuesday morning.

“They threw stones at the glass doors and within seconds they were inside the shop and all we could do is watch,” he said. 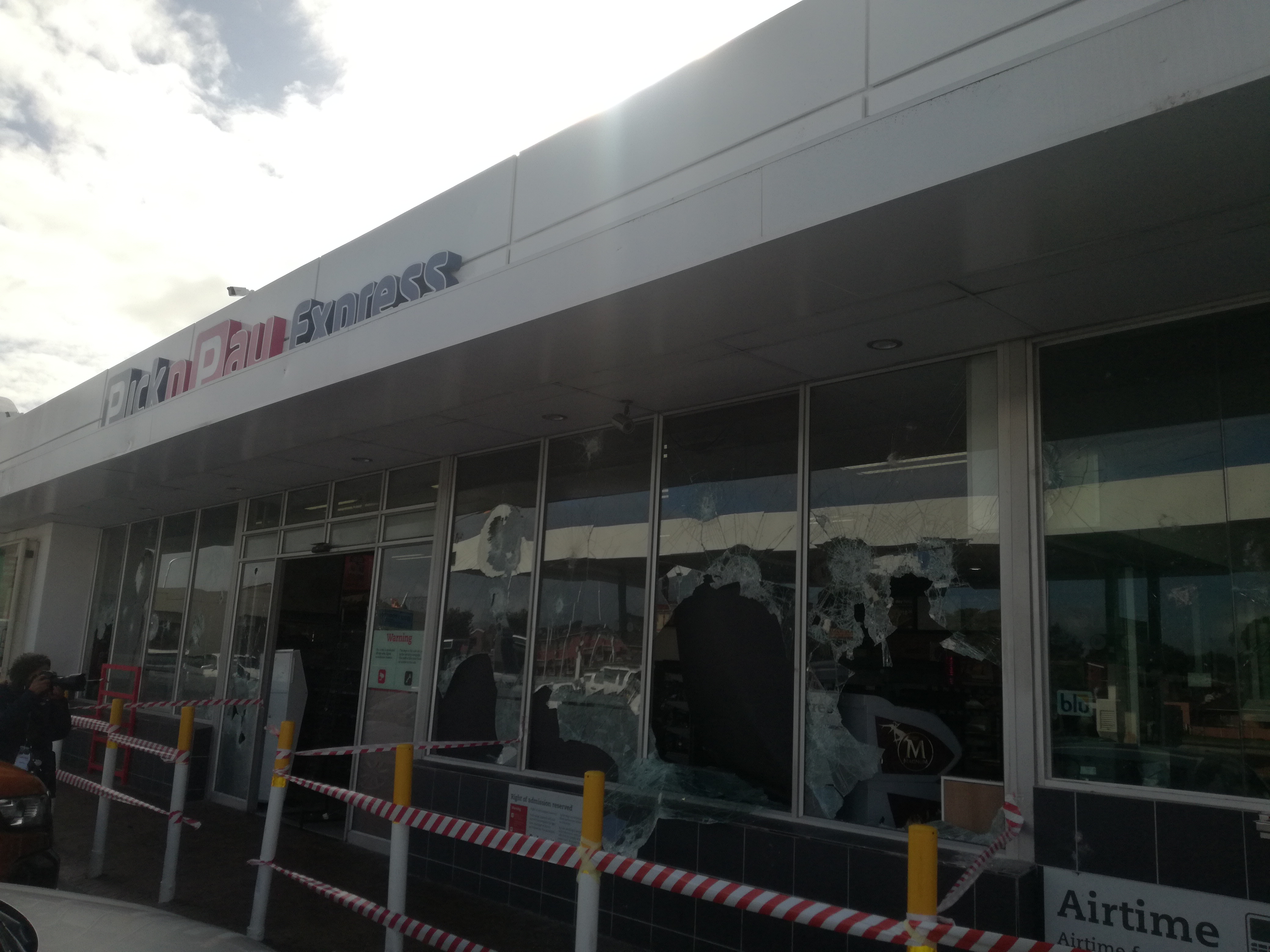 Cases of burglary and theft had been opened for investigation and seven protesters had been arrested.

“I have been living here all my life and this land has been vacant while we are struggling for houses,” said one resident. He said he had been on the housing waiting list for over 15 years and had been living with his parents in a rented council flat in the area.

“It’s important to understand who qualifies for a housing opportunity” said Andrews. “Beneficiaries of all City housing projects are selected and opportunities are allocated in accordance with the City’s Allocation Policy and the housing database. This is to ensure that housing opportunities are provided to qualifying applicants in a fair, transparent and equal manner; and to prevent queue-jumping.”

Next:  Victory for asylum seekers in Constitutional Court