Protesters call for Moloto Rail Corridor to be built

“Many lives will be saved, convenience will be brought to people’s lives, and economic stimulation for our locals will happen” 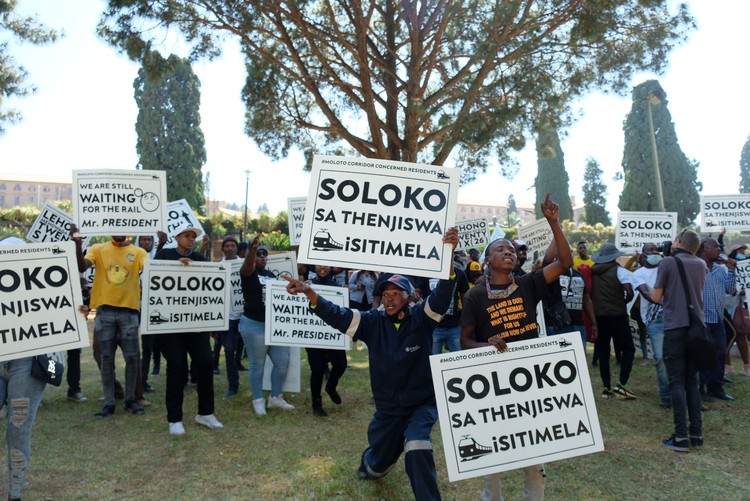 Community members demand the implementation of the delayed railway between Gauteng and Mpumalanga. Photo: Elna Schütz

Residents of several municipalities in Limpopo and Mpumalanga are demanding the Moloto Rail Corridor project be immediately implemented. They claim it will improve development and lower collisions and congestion on the dangerous R573 road.

About 40 people from Thembisile Hani, Dr JS Moroka, and Elias Motsoaledi municipalities protested at the Union Buildings on Friday.

Their memorandum gives the President a week to provide plans for implementing the project. It said: “Our people have been patient for a very long time and they have ran out of patience!”

It demands the construction of 13 new train stations, taxi feeder routes and taxi ranks at the main stations. The group’s other demands include that contracts of bus operator PUTCO be unbundled and access to them be given to local operators.

One of the protest organisers, Sam ‘Obama’ Masango, said that the government made a promise that the communities would get a railroad and that it has been a long fight. We were told the corridor would start being built in 2018 or 2019, he claims.

He said the government is increasing the existing challenges in the area by not approving the railway project. “We’re trying to help the government to save lives,” he said.

Community member Ntombi Khumalo said she knows a lot of people who have suffered because of the dangerous road. “It means that our parents are always in danger, which also leads to poverty, because parents die on the road to work and also young people die on their way to school,” she said. Khumalo claims they have been expecting the railway for 26 years.

Mpho Ledwaba from the Elias Motsoaledi municipality has used buses to commute to varsity and work in Pretoria for years. He said he has witnessed countless accidents and has been highly inconvenienced by the inadequacies in the system.

“We feel that through the train, many lives will be saved, convenience will be brought to people’s lives, and economic stimulation for our locals will happen,” he said. “We feel that this corridor will improve the livelihoods of the ordinary and the poor of our community.”

Doctor Mahlangu, public relations officer at the KwaNdebele United Local and Long Distance Taxi Association said they are considering a shutdown of operations to protest the situation if there is no rapid progress.

The association currently focuses on transporting people into Pretoria, but passengers have drastically decreased because of lockdown restrictions. Mahlangu hopes that the rail line would increase taxi business by opening up shuttle routes from villages to the train station. “We need to have that train so that we can have employment in KwaNdebele,” he said.

Last year, transport minister Fikile Mbalula said in Parliament that funding for the project had not yet been transferred to the respective provincial governments, but that R17 million had been spent on feasibility studies. Former president Jacob Zuma reportedly signed an agreement with a Chinese company in 2016 to set the project in motion.

Next:  No arrests after deaf boy mauled by dogs