About 150 people marched to the Delft police station, Cape Town, on Saturday, demanding that police take action in the murder case of Unathi Bixa, who was shot dead in broad daylight last year.

“We demand that the investigator handling Bixa’s case be removed, failing which we will take the matter to another level. We want progress reports on the case on a monthly basis,” said Funeka Soldaat, coordinator of Free Gender, a black lesbian organisation based in Khayelitsha

“The investigator seems to have no clue about how to go about probing the case,” said Soldaat. “We keep on correcting him when he refers to Bixa as a ‘he’.” Soldaat says they must refer to as a she, and acknowledge that she’s a lesbian.

“We gave the police our cell numbers and email addresses so they could keep us informed about the investigation, but they never bothered to contact us,” she said.

Free Gender, End Rape, Triangle Project, Khaya Vac and Affirmative Ministries participated in the march. The marchers sang, “We will go forward even if they rape and beat us up”. They carried placards that read: “Rape culture must fall”, “We need justice”, and “Long live the spirit of Noxolo Klaas”. A leader of the march shouted, “Be strong, lesbians and gays. Be strong!”

“How many times must a man kill lesbians before he is judged a killer?” asked Soldaat. “A reveller slapped Noxolo Klaas on her bum during New Year festivities in Strand. When she complained about the slapping, he stabbed her to death … The man is out of jail now but I don’t know why.”

In 2016, GroundUp reported on how no arrests had been made in the murder of Phumeza Nkolonzi, a young lesbian woman shot in 2012. GroundUp has also been following the murder case of Noxolo Xakeka, who was lesbian and allegedly stabbed to death by accused Bongile Joni after he made homophobic comments. The accused will appear in court on Wednesday.

Captain Sizwe Tyala received a memorandum of demands and said he would hand it to the station commander who was not present at the time.

Velisa Jara, chairperson of Free Gender, said lesbians were raped and the “rapists said they wanted to change them from being men into being women”. She mentioned two incidents, last year and another early this year in Makhaza, Khayelitsha. “They [the victims] are undergoing counselling now, but they are still too traumatised to open up about their experiences. Even counsellors are battling to get them to talk.”

Phumeza Runeyi said the protests were slowly shifting attitudes towards lesbians and gays. “We are here to pressurise cops to arrest the man who killed Bixa because we want justice for her. Lesbians and gays get maltreated and raped every day in the townships, so we want cops to protect us.”

Among the marchers were victims of homophobic attacks. Sinoxolo Nqwenani said: “At one time thugs robbed me of my cell phone and money in Mandela Park. They beat me up and told me to fight back because I’m also a man.”

Western Cape police spokesperson Lieutenant-Colonel Andrè Traut said: “This office can confirm that a group of about 150 community members staged a peaceful march to Delft police station and handed over a memorandum to a representative of SAPS regarding gender based violence.”

We are awaiting comment from police on the Bixa case. 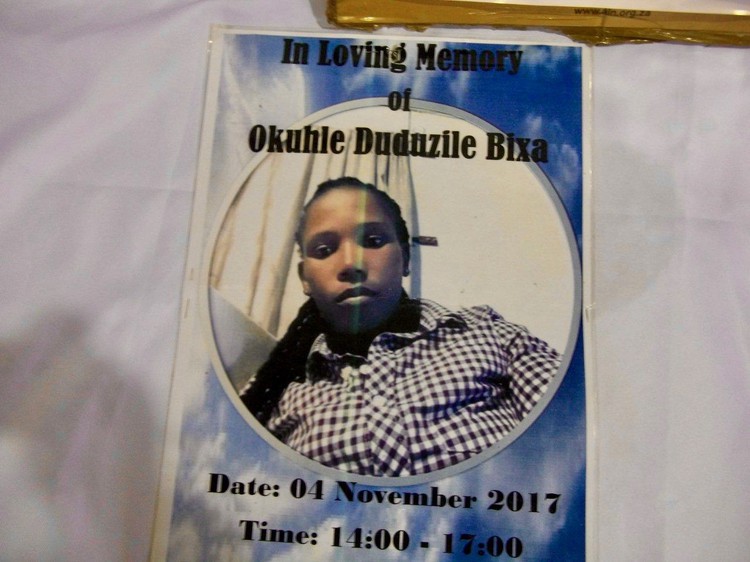 Next:  Workers battle to get UIF paid out