Residents complain they are getting no answers from City 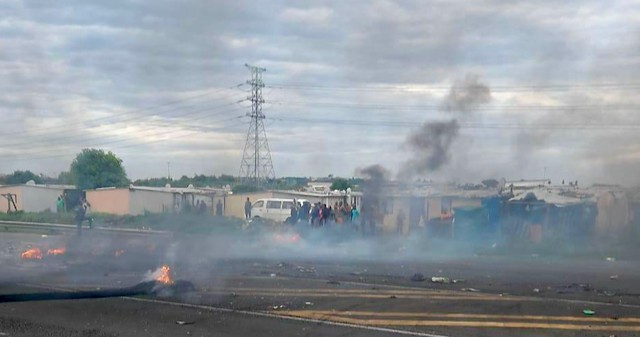 Isipingo transit camp residents took to the streets on Wednesday over delays with a housing project. Photo: Nokulunga Majola

Residents of Isipingo transit camp, south of Durban, blocked off Mfundi Mngadi Drive (M35) with bags of rubbish and burning tyres on Wednesday morning. The protest was over the Kanku Road low-income housing development project, where work came to a stop three weeks ago.

The intended beneficiaries say the project should have been completed by now. They want the municipality to explain and address the delays.

Community committee member Thami Danisa said they had not wanted to take the issue to the streets, but they have tried to get answers from City officials without success.

“We have sent emails, called and sent texts, but we are not getting any response from the City. All we want to know is why the project was put on hold and for how long,” said Danisa.

He said the contractor had given a reasonable explanation for the work stoppage, but “the City must tell us when is the project expected to resume and how are they going to resolve all the issues that are causing the delay”.

He said a stormwater pipe that cuts through four homes and the need for a retaining wall were two of the issues.

“The contractor said he cannot bring the material to the site as the road is not tarred … The road needs to be tarred before the project can continue and that needs more money from the municipality,” Danisa said.

Some of the residents have been living at the transit camp for over ten years. Residents say they had hoped that they would start the new year in their new homes.

Ward 90 Councillor Sunil Brijmohan said he thinks some people are using the project to push a political agenda as the local elections loom. “Why less than 100 people were protesting? Because it should have been a lot more than that,” he said.

KwaZulu-Natal police spokesperson Captain Nqobile Gwala said a crowd of about 50 to 70 people dispersed when police arrived and no case was opened.

City spokesperson Msawakhe Mayisela said, “The Kanku Road project construction was delayed due to Covid-19 lockdown and restrictions around the health and safety of workers onsite due the pandemic. Nonetheless, construction of services started on 1 June 2020, and are now 90% complete. Securing of all planning, zoning and environmental approvals is well underway, and the township register and formal layout will be lodged by May 2021. Currently, additional funding for retaining walls is being found, and construction of houses will begin once services are complete and building plans have been approved (anticipated March 2021).”

Next:  “I can’t recall the last time I saw the municipal rubbish truck”: Makhanda families dump their rubbish in the street

Previous:  This school goes the extra mile to feed its learners