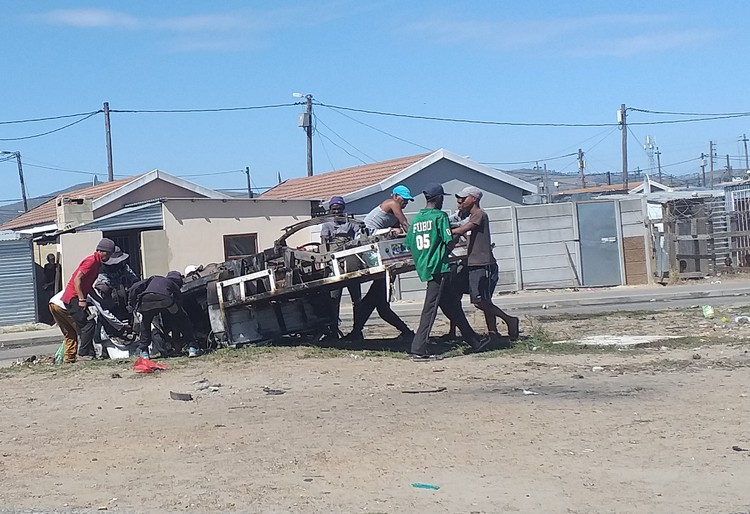 People strip a truck that was torched in Wednesday’s protest. Photo: Vincent Lali

Gunshots rang out. Each time the protesters dispersed, only to come together again and light fires on the busy road.

The protesters came from newly established informal settlements in Wallacedene and Bloekombos.

When we arrived at midday, protesters were busy stripping a truck which had been torched earlier near Leboheme Street in Wallacedene.

Bloekombos High School teachers and learners were standing outside their classrooms and watching the protest.

“We are all out of our classrooms because the police teargas chokes us,” said Vuyo Duna.

He said the teargas forced teachers to halt learning and teaching at about 10:30 today.

“Teachers struggled to come to work because of the road blockage. The protesters stoned a car belonging to one of our colleagues,” he said.

Police spokesperson Andre Traut said public order police had been deployed to Malibu village and Wallacedene in Kraaifontein. He said a “suspected male protester who is yet to be identified” had been killed when he was struck by a truck. “The circumstances surrounding the culpable homicide case are under investigation.”

“In Malibu Village a case of public violence has been registered after a bus has been set alight, and suspects are yet to be arrested,” Traut said.

Protester Ziyanda Mbuthuma said the shack dwellers were protesting because the City of Cape Town had sent them a court order saying that they must leave the City’s land (we have a copy of the order).

“We are angry that the City wants to take its land back. Where will we stay? We don’t even work,” she said.

“We want the City to install toilets, electricity and water taps instead of telling us to vacate the land,” she said.

Spokesperson for the Western Cape Education Department Bronagh Hammond said, “We appeal to communities to consider the rights of learners when protesting. They too have a basic right to education, and have lost valuable teaching time due to the pandemic.”

Questions sent to the City of Cape Town had not been answered at the time of publication.

Next:  Marius Fransman, the Cape minstrels and the Lottery millions