Three people were arrested during the scuffle on Monday 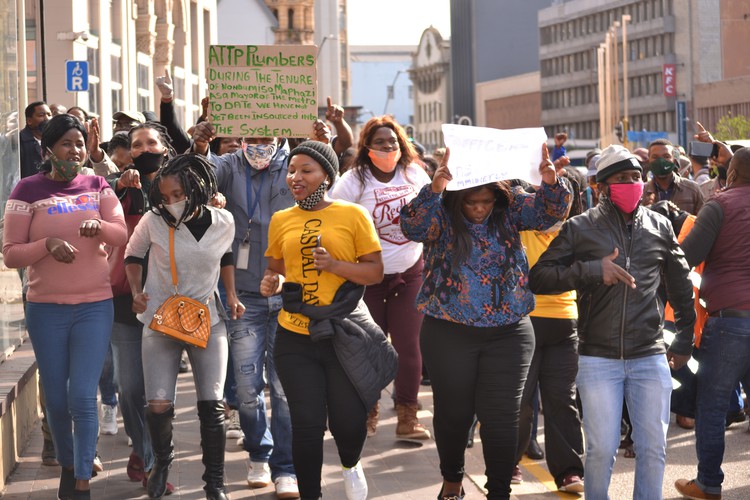 About 150 workers led by DEMAWUSA marched through the streets of Port Elizabeth’s CBD on Monday to demand that they be insourced by the municipality. Photo: Thamsanqa Mbovane

About 150 workers led by the Democratic Municipal and Allied Workers Union of South Africa (DEMAWUSA) marched through the Port Elizabeth CBD on Monday to demand that they be insourced by the municipality.

The group gathered to protest outside Feather Market Hall, where a council meeting was taking place. The scene quickly became chaotic when police fired a stun grenade after the group refused to disperse. Three people were arrested.

Police spokesperson Colonel Priscilla Naidu confirmed that people gathered outside the council chambers in Govan Mbeki Avenue. “Public Order Policing was in attendance. The crowd was advised to disperse as they are not allowed to congregate in large numbers as per the Disaster Management Act.

“The crowd refused and a stun grenade was fired. Three people were arrested, two males aged 38 and 55 years and a female aged 42 years. It is further alleged that the female had to be restrained as she was in the process of stripping off her clothes.”

Xola Botha, who worked as a security guard but is currently unemployed, said he witnessed one of his former female colleagues “wrestling with a policeman”.

He said, “She was standing in the middle of the street and shouting … crying as one of the police officers was wrestling with her. She shouted that she had a right to protest for her rights … the policemen later handcuffed her and took her away in a police vehicle.”

In March, GroundUp reported on a protest by the same group while a council meeting was in session. The demand for insourcing stems from a resolution taken in 2018 after a motion was tabled by the EFF. However, it was not entirely implemented; only certain workers were insourced.

Siphiwe Ndunyana, provincial coordinator at DEMAWUSA, condemned the arrests. Addressing protesters soon after, he said, “They [the state] will use anything to destabilize you. This is a fight and we must all understand it. The police are used by the capitalists. Council meetings must not happen as normal when some of us have been arrested.”

Monde Petani, who joined the protest, said that workers would not allow council members to run for another five years without making some provisions for the security guards. “The insourcing resolution was passed on 4 December 2018 by council, yet we are sitting at home without any reasons. Water leaks while we as essential workers are jobless because of these politicians who keep doing nothing for every five years.”

Municipal spokesperson Mthubanzi Mniki said only security guards that were guarding municipal sites were made permanent during the implementation of the council resolution.

Mniki referred other questions to MMC Makhi Feni of Corporate Service, who was still in a council meeting at 3pm.

The area around City Hall remained tense on Monday afternoon with police vehicles monitoring a group of protesters nearby.

Next:  Sophiatown bursts into protests