The Ramaphosa Village graveyard in Patensie, Eastern Cape, is in a sad state. GroundUp found pigs rooting in the graveyard, headstones knocked over, and graves vandalised. Villagers use the unfenced property as a shortcut. A number of shacks have also gone up on the very edge of the cemetery.

A legal dispute lodged by a company over the outcome of a tender with the Kouga Municipality means that problems at the graveyard are unlikely to be fixed soon. The municipality says it cannot fence its cemeteries until the legal dispute is resolved.

Municipal spokesperson Laura Leigh-Randall said it recently awarded a three-year tender to Yonke Imihla Building Solutions to fence 15 cemeteries. “They are a well established company that has worked for various municipalities and government departments,” said Leigh-Randall.

But another company has objected to the tender award.

She said R500,000 was budgeted for the fencing in the current financial year and a “provisional amount of R1.5 million is on the draft budget for the upcoming financial year starting July 2019”.

She said priorities for fencing were the cemeteries at Hankey, Patensie, KwaNomzamo cemetery in Humansdorp, and a section of the C-Place cemetery in Jeffreys Bay.

But the Ramaphosa Village cemetery has other problems. It is located on a steep slope and suffers from erosion.

Mzwanele Songa, whose aunt was buried at the graveyard two years ago, said, “Some of the graves have sunk down while a few have been washed away by runoff water. It is very difficult to locate our loved ones’ graves here.”

“They should have dug a trench at the top to divert running water away from graves when it is raining,” he said.

“Criminals are making it worse by stealing metal grave markers, which they sell at scrap metal dealers,” said Songa. 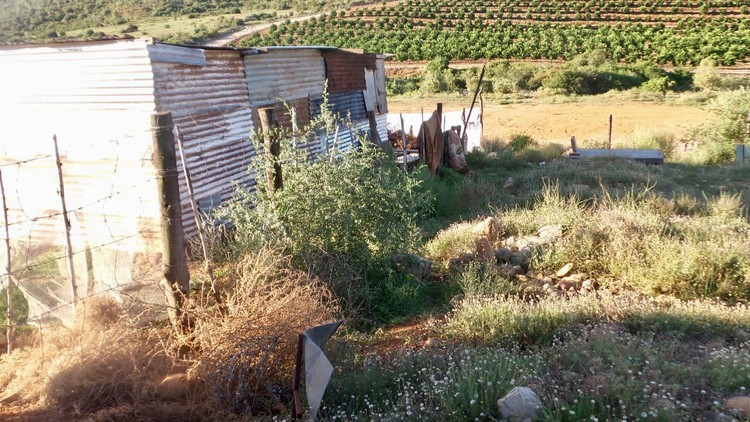 Shacks have been built on the very edge of the Ramaphosa Village cemetery in Patensie. Photo: Joseph Chirume

A man renting a shack next to the graves, who refused to give his name, said he was a seasonal worker on the citrus farms.

“This is the only place I could find, though it is not good – morally and culturally – to live next to graves. The government should engage local farmers who have extra land so it can buy more land for housing purposes because land is a problem here,” he said.

Community Services Portfolio Councillor Daniel Benson said, “This particular cemetery was given a thorough clean-up towards the end of last year.”

“The municipality will prioritise those cemeteries to be fenced in consultation with the respective ward councillors,” he said.