People here have been waiting for houses since 1996. They may soon get them

The Valhalla Park Housing Project began in 2016. The first houses are almost finished 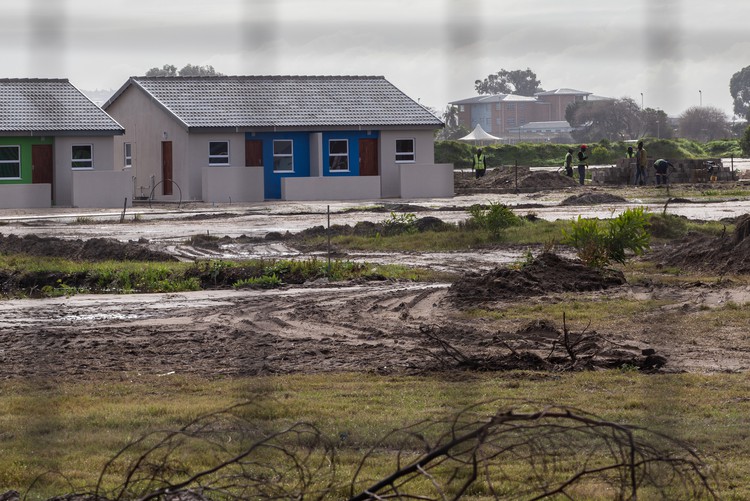 Valhalla Park Housing Project, originally begun in 2016, has restarted. The first few houses should be completed by the end of September 2021. Photo: Ashraf Hendricks

A first phase of a housing project that was meant to be completed in 2017, might finally be finished by the end of September. That is “if all goes according to plan”, says Mayco Member for Human Settlements Malusi Booi.

The City of Cape Town Valhalla Park Housing Project was started in 2016 but was shut down in May 2017. This was due to violence in the area, according to Xolani Koyana, at the time spokesperson to then Mayor Patricia De Lille. He said on a number of occasions that the contractors were threatened by gangsters who wanted the company to pay protection money.

In 2018, we reported how Gladys Minords, had been on the housing waiting list for over 20 years. We were unable to reach her, but Ingrid Davids of Elsies River has been on a housing list since 1996. She turns 51 in September.

“I am [currently] renting a room. The conditions that I am living under are not good,” said Davids. “I received a letter about a year ago, but it was just a letter from the City sort of reminding me that I am a beneficiary. But no dates saying when exactly I would be getting the house.”

She is one of 781 people waiting to be first time property owners in the project. The Breaking New Ground houses (government’s preferred term for RDP houses) will be 40m2 each. The final fourth phase will be completed in late 2023, according to Booi.

Ward 30 Councillor Charles Esau (DA) admitted there had been delays. “We have since met with the steering committees and we are getting things moving. We have sent out letters to the beneficiaries informing them of what is going on. Beneficiaries are also advised to go to the satellite office at the Valhalla Park civic centre, to check if their details need any updating,” he said.

A few show houses can already be seen. “Only approved beneficiaries are allowed to visit the site to have a look at the show houses by asking for the community liaison officer on site,” said Booi.

Community members can visit the City’s satellite office in Valhalla Park Civic Centre on Mondays, Wednesdays and Thursdays from 9am to 2pm.

Next:  How Africans and Indians are trying to bring peace to Phoenix