How Africans and Indians are trying to bring peace to Phoenix

As KZN mops up after unrest, communities try to unite 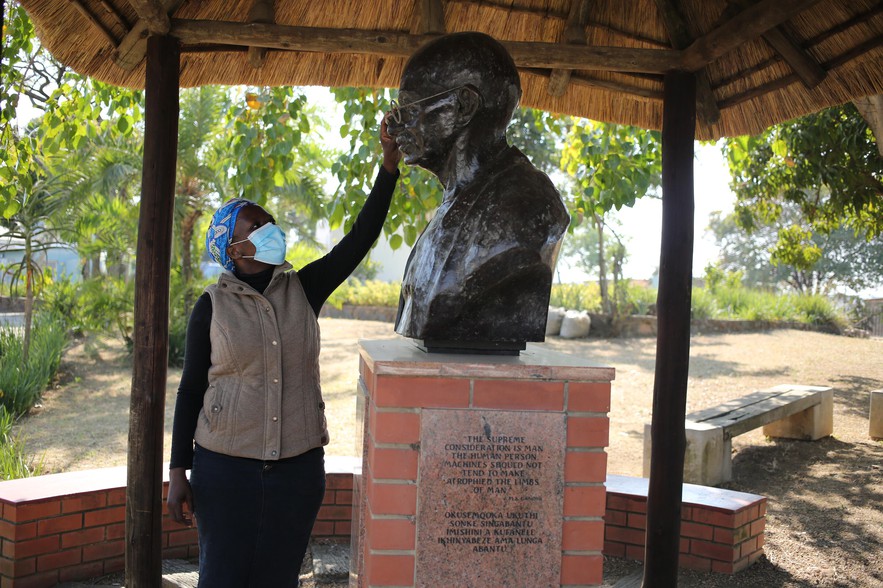 Blessing Nyoni adjusts the spectacles of Mahatma Gandhi at Inanda near Phoenix.

Journalists Greg Arde and Mlungisi Mbele live in Durban. They witnessed, reported and photographed the unrest from 8 to 14 July. Last week they visited Phoenix and met Blessing Nyoni and Sajeev Singh, who are trying to heal the divide between their communities.

Blessing Nyoni walks up to the Gandhi statue near her home in Durban and gently adjusts the icon’s broken spectacles as if she were tending to her living kin.

Nyoni, like most KwaZulu-Natal residents is still struggling to get to grips with the turmoil unleashed on the province since Jacob Zuma was jailed.

The scale of the unrest was astonishing: it claimed 330 lives, effected a complete KwaZulu-Natal shutdown and choked the N3 between Durban and Johannesburg.

More importantly it seems to have had the effect its instigators sought: it instilled terror. I felt the fear in my gut and I could see it in the crazed look of people on the streets from community roadblocks to food queues.

For over a fortnight anxiety levels spiked as sounds and pictures of violence flooded social media and people smelt the burning and heard shooting, the wail of sirens and the drone of airplanes. Screeds have been written about the unrest, its genesis and its impact.

The story of Nyoni and Sanjeev Singh, a businessman and community activist, perhaps charts where to from now in KwaZulu-Natal. 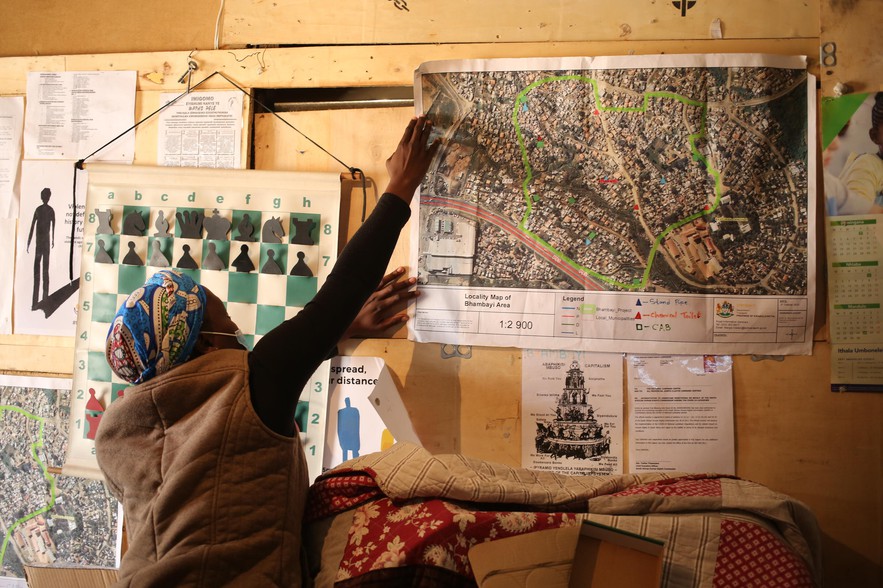 Blessing Nyoni pins a map to the wall that shows the informal settlement of Bhambayi near Phoenix. About 70 families live in this area.

Nyoni runs a self-help charity in a place called Bhambayi (the name is an approximation of Bombay), the shack lands bordering the Phoenix settlement established by Mahatma Gandhi during the 21 years he lived in South Africa.

A few kilometers behind Nyoni’s house is Inanda, where Nelson Mandela first voted as a free man and where John Langalibalele Dube, the founder of the ANC, lived. In front of Nyoni’s house is the apartheid designated Indian area of Phoenix, the scene of what has been described as a “massacre”.

A few kilometers away are Cornubia, Riverhorse and Springfield where distribution centres, retailers and offices were torched, among the worst hit in the R20-billion damage, which has reportedly put 150,000 jobs at risk.

The challenge reporting on the KZN unrest has been to truly reflect the scale of the damage, especially in the midst of the maelstrom.

For a fortnight cellphones burned white hot with messages of mayhem. Sifting fact from fiction and muting exaggeration was challenging.

But a few things stand out.

Following a pilgrimage of Jacob Zuma’s supporters to Nkandla before he was jailed, protests flared up on the N2 and the N3, sparking chaos in major urban areas and towns all over KZN, from Umzumbi to Greytown to Empangeni.

Between Durban and Pietermaritzburg in a place near Cato Ridge a large logistics warehouse was among the buildings looted.

The plunder there lasted almost three days and the company’s CEO said the line of cars waiting to haul away the bounty was three kilometres long.

In Mobeni a container yard was hit and 1.2 million rounds of ammunition were stolen, bullets that may find their way to an underworld of security heavies, construction mafia, drug lords and taxi hit men.

This has yet to be properly unpacked, but people spoke of the “precision” of the attacks, arson and theft.

A truck repairman told me how his workshop was targeted by people skilled enough to drive away four heavy duty rigs.

Members of Zuma’s family gleefully posted on Twitter while the fires burned and then released a statement about the “righteous anger of the people”.

People under siege armed themselves, set up roadblocks and started shooting, including in Phoenix where Singh lives across the valley from Blessing Nyoni’s home.

Phoenix is marginally less poor than Bhambayi and is beset by crime, unemployment and drugs. In apartheid spatial planning it was set up as a buffer between African and white areas. Tomes will be written about what happened in Phoenix, about fear, self-protection, racism, beatings and murder.

In short, according to government, 38 people died in the Phoenix area, and at least nine people have been arrested and charged.

Calm has been restored on the Phoenix Highway, the route between Nyoni and Singh’s homes. Where a week ago there were burning barricades, now businesses are plying their trade, selling everything from exhaust pipes to potatoes.

On the face of it things are back to normal but below the surface people are deeply traumatised.

Which is what Nyoni, Singh and their peace committee are trying to address at tentative meetings at the Gandhi settlement and through joint outreach visits. The committee of nine was established after the violence had settled and is made up of people in both Bhambayi and Phoenix.

Nyoni says there is racism in all communities, but it’s not the overriding narrative. 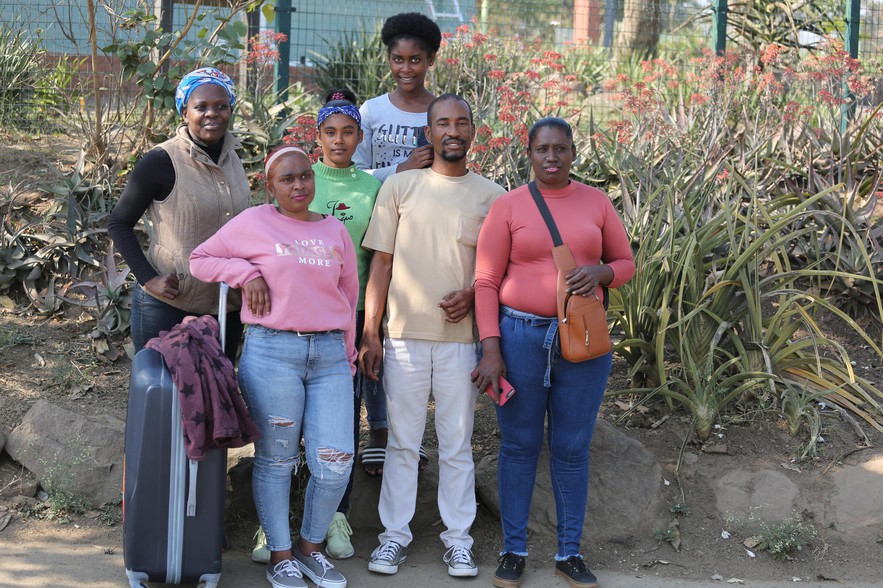 Blessing Nyoni (far left) poses with an inter-racial family in Bhambayi. On the far right are married couple Zizwe Mthunzi and Vanilla Soobramoney. In the back are their children Odel and Kazia. In front is Rochelle Mohanlall, Vanilla’s sister.

In Bhambayi there are inter-racial couples, including Vanilla Soobramoney and Zizwe Mthunzi, who have lived peacefully with their children there for decades.

“There was a lot of misunderstanding” Mthunzi said of the unrest as he walked arm in arm with his wife on a Saturday stroll to the bus stop.

There was looting for need and for greed, Nyoni says, though neither is forgivable. “We have to find calm. People are angry on all sides. They want justice.”

The only response, she says, is joint community action to fill the leadership void and address service delivery failures.

The peace committee has a mountain to climb. People are embittered by fear. It was as though the unrest became a lightning rod for frustration around many things.

Singh says, “It takes courage to preach peace now. There are divisions and you can’t brush over them, but we’re trying to see each other as equals and to be a community that comes together, not just on Mandela Day.

“We are going around together and addressing communities … ​​We have to push rather than wait while the government steals the money. If we don’t, this problem will come back.

“What we are doing seems like a drop in an ocean of racism and aggression … This thing spawned something awful, but what is the alternative? We have to do this.” 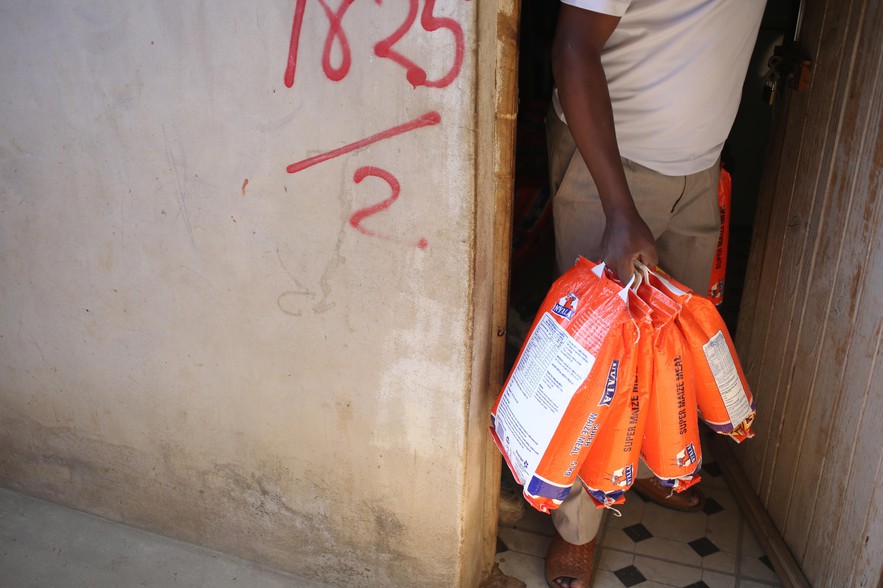 Nyoni and a group of volunteers hand out maize meal to people who come to Nyoni’s house on weekends. This is one of the ways that Nyoni helps to take care of families in the area.

Nyoni says it is poetic that the peace committee meets at the Gandhi settlement. Gandhi’s story is about transformation. He overcame anger and racism. “He became a better person. In my life I have changed and that change started with me. When I come here I ask Gandhi for wisdom … What the peace committee is doing is an ideal. It is a dream when you consider all the anger in our history. But I am part of that dream.”

And the dream, she says, will be sooner realised by action than talking, though the latter is important. People have to have difficult discussions. But they will soon tire of talking. They need to see change and that will come from fixing service delivery failures.

Beneath the Gandhi statue where Nyoni pays homage is a quote from the Mahatma. It reads: “A semi-starved nation can have neither religion nor art nor organisation.”

Previous:  People here have been waiting for houses since 1996. They may soon get them