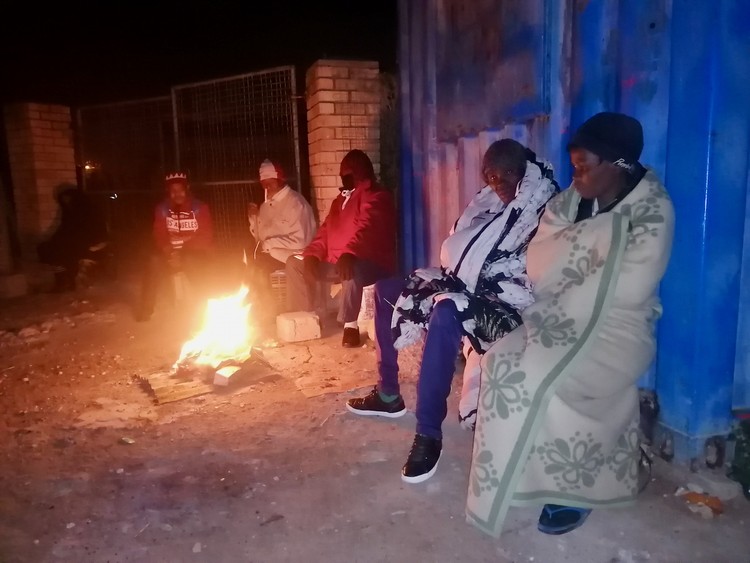 Patients queue outside the clinic in Motherwell, Gqeberha, from 1am in order to be among the 100 people served each day. They burn rubbish to keep themselves warm. Photo: Mkhuseli Sizani

The sick, the infirm, the elderly, and patients collecting chronic medication wait all night, outside in the cold, at the clinic in Motherwell NU11, Gqeberha.

GroundUp met people who queue from as early as 1am, hoping to be seen the same day. They burn rubbish from an illegal dump site nearby to keep warm, and they wait, wrapped in blankets, sitting on paint buckets and bricks.

The clinic opens at 7:30am. People in the community say only the first 100 people have a chance of being seen. Patients say it is overcrowded but understaffed, and a second clinic is needed in NU29, about three kilometres away.

NU29 is a new informal settlement where the Nelson Mandela Bay Municipality has relocated people from various wetlands across the metro. This has strained the NU11 clinic.

“Then we have NU11, NU12 A, B and C and NU30, which all depend on Motherwell NU11 Clinic. So we are talking about thousands of people in this ward who are solely depending on one clinic. They are turned back home daily because the mobile clinic is also not coping with these numbers,” said Dayimani.

Dayimani said successive MECs for health had been informed but nothing had been done.

Madiba Qandana, who was queuing at the clinic, said there ought to at least be a booking system. “I was turned back home three times last month because I had arrived at 6am. Today, I arrived here at 3am in order to be assisted,” he said.

Mninikhaya Tive was among those who arrived at 1am. He was queueing for someone who lives far away. He will charge her R30 for keeping her place until the clinic opens. “I have been doing this for three years because it helps me to put bread on the table for myself because I am unemployed,” he said.

Melumzi Mankayi, who lives across the road, arrived at 2am. He is also a paid placeholder. “I have two children and I am unemployed,” he said. “I made this arrangement with patients who kept on being turned away.”

Nolungile Nondwangu, 70, said, “For three months I have not received my hypertension and diabetes treatment because the clinic is always full … In the past, all the pensioners like me were allowed to get inside and take their medication. But through frustration, other patients say we must also learn to wake up early and queue like them. I am tired and dizzy because I did not eat.”

Yonela Dekeda, spokesperson of the provincial health department, said, “The department is not aware that the facility turns patients away. This matter will be investigated.” Dekeda said the department had appointed three additional staff members for the NU11 clinic.

Dekeda said there are no plans to build a clinic in NU29, but the area is served by a mobile clinic twice per week.

But patients told GroundUp they cannot get chronic medication at the mobile clinic.

Next:  Police minister ordered to pay R400,000 after unlawful arrest and detention

Previous:  Traders at the historic Salt River Market will be excluded from new City development