Company awarded R20m to refurbish the site. But a dispute with a subcontractor threatens the project. 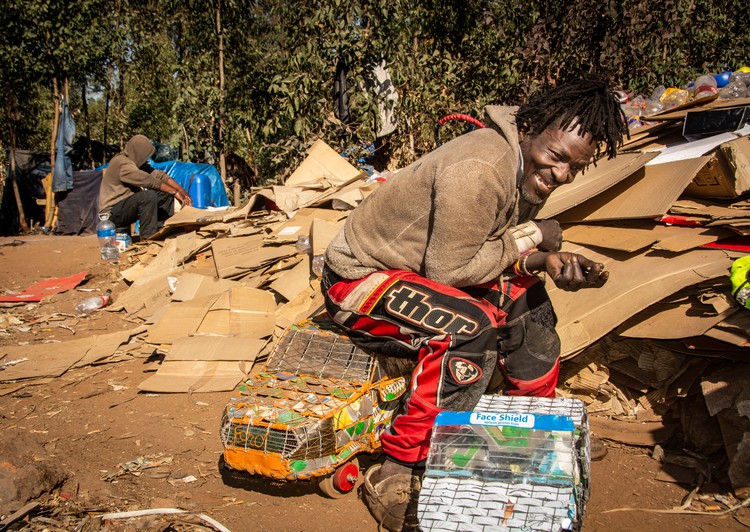 Mthetheleli Nazo is one of several people who are living at the dumpsite in Makhanda despite being removed from the area by the municipality over a year ago. Photo: Loyiso Dyongman

A group of people living on a landfill site in Cradock Road outside Makhanda say they have nowhere else to go. The occupiers say their lives are much better at the landfill than in the townships.

In September 2015, the Makana Municipality was ordered by the Grahamstown High Court to bring the dumpsite in line with environmental legislation. But the municipality delayed the process by appealing the ruling. The appeal is still to be heard. Nevertheless, a contractor was eventually appointed to clean and upgrade the site.

Occupiers said the dumpsite was their home and that they had been living there and scavenging for expired food. When the upgrade to the site started, the occupiers were removed by the municipality and denied access to the dumpsite. But when we visited the dumpsite on Monday, people were loading food in donkey carts and others were searching for food and items to sell to scrap metal businesses. The occupiers we spoke to said that most of the previous occupiers have moved back to the dumpsite.

Manezi Dlabantu from Tantyi is unemployed and has been living at the dumpsite for eight years. “We know what we are doing is not right but we need the dumpsite. We know that we are destroying the good work that was started [by the upgrade company],” said Dlabantu.

Thobelani Funda said he arrived at the dumpsite in 2016. He lived with his mother and two sisters but they are all unemployed. “Here we get the expired food from the shops rather than sitting at home with an empty stomach,” said Funda.

The municipality’s director of Public Safety and Community Services, Kelello Makgoka, insisted that people are being prevented from living at the dumpsite and that no one who had lived there since the start of lockdown in March 2020. “They were removed and placed at the shelter in the Recreational Hall, Most of them were reunited with their families through a social development program.”

The Makana Municipality awarded Mphele Engineers the tender worth over R20 million to start work on the site in March this year with subcontractor Seperation at Source. The site is expected to be completed in three years.

However, according to Seperation at Source, their contract with Mphele Engineers has been terminated.

Mphele Engineers has been tasked with refurbishing the perimeter fence, controlling access to the site, developing a waste-screening mechanism, and appointing an independent specialist to review environmental monitoring data.

Abri Albertyn from Seperation at Source said the dumpsite was back to its poor condition. “The people have returned there and the place is going downhill again fast. I implemented a clean garden waste section. Now it’s contaminated completely with all sorts of waste. It’s very sad to see all the hard work go to waste. Our contract was terminated by Mphele,” he said.

Director of Mphele Engineers, Marius Els, confirmed that they had terminated the contract with the subcontractors “due to poor business ethics”. He told GroundUp that the company is currently embroiled in a lawsuit against Seperation at Source. “We take the allegations from Abri Albertyn very seriously. We are in the middle of a lawsuit against Abri and Seperation at Source for using different media platforms to disgrace Mphele Engineers. We will not allow it to continue,” said Els.

Makgoka said, “Mphele Engineers are on site and are working to manage the landfill site in line with the licence condition. No contractors have left the site according to the municipality’s knowledge.”

Next:  How mining erodes the rights of women