PRASA has failed to clarify the situation 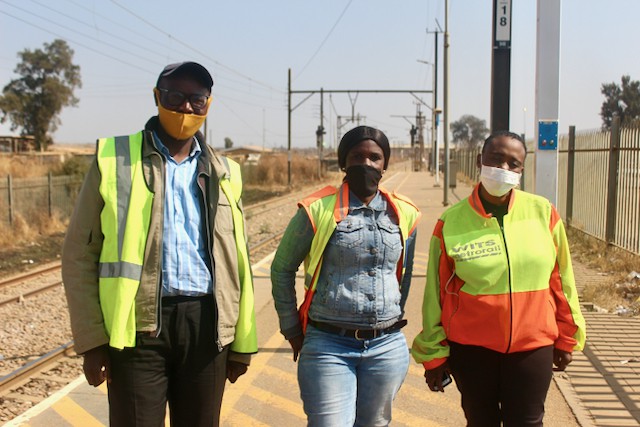 Edward Riba, Kgabo Mokwele and Ntombizodwa Mahlangu (from left to right) were the only volunteers still patrolling at Pienaarspoort train station when GroundUp visited on 18 August. Photo: Mosima Rafapa

Dozens of residents in Mamelodi say they have spent their time doing voluntary patrols at train stations to protect rail infrastructure from vandals and thieves.

They say they expected to receive a stipend for the first three months and then to sign a two-year contract with the Passenger Rail Agency of South Africa (PRASA).

But many months later, they have nothing.

Some say they started patrolling in early December 2020; others that they joined in the first few months of 2021.

“There were more people at the stations but some have given up. They don’t want to fight. They’ve accepted that they volunteered with their time for nothing,” says Ben Bodiba, from Mamelodi East.

Bodiba says he has been unemployed for more than three years. He thought he had a breakthrough at long last with the People’s Responsibility to Protect Project (PR2P) – in which local communities living near railway lines provide additional support to PRASA security.

Bodiba says he and other rail patrollers were recruited by the Umkhonto weSizwe Military Veterans’ Association (MKMVA), who told them that PRASA was looking for people to guard its stations and infrastructure.

MKMVA members owned security companies that had lucrative contracts with PRASA which were cancelled in late 2019 and then April 2020. In September and October 2020, MKMVA members led by the late Kebby Maphatsoe engaged in a series of protests against Mbalula about the termination of the contracts.

“No PRASA officials ever addressed the group. It was always the MKMVA on behalf of PRASA,” said Bodiba.

Volunteers who had not been security guards before underwent training for a month from 10 February to 10 March at Denneboom central grounds to become Private Security Industry Regulatory Authority (PSIRA) compliant. Patrollers paid R500 for the security course.

We have seen several people’s bank deposits slips for R500 made out to Shiya Phantsi Cleaning and Security based in Soshanguve.

Lucky Nkosi did the training. He said, “The MKMVA guy [known as Jackie] said he has a security company and he’d make it easy for us to get the certificates. My brother and I [each] paid R500. No one answers us anymore when we call.”

Shelly Morotho went through training and then started guarding Mamelodi Gardens station. She and her sister, Takalani, also each paid R500. “We were afraid to pay but after writing a test, we were convinced that everything was legit. Whenever we enquired about the certificate, they told us that we’d get them, that we should send proof of payment and ID. We did, until they started ignoring our calls and WhatsApp texts,” said Morotho.

When it became clear that they were not getting certificates, they asked for refunds, but they were told that PSIRA does not give refunds.

Jacob Ngede of Shiya Phantsi Cleaning and Security explained: “The R500 deposit that they paid was for submitting their results to PSIRA after writing a test. They need to pay the outstanding R1,000 to get their certificates. How would they get hired by PRASA if they don’t have a certificate? It’s not possible to get their money back and I explained that to them.”

He denied being an MKMVA member, although the patrollers that GroundUp spoke to said he was part of those recruiting them.

Bodiba said the volunteers were convinced that there was future employment at PRASA and that the deal was legitimate because transport minister Fikile Mbalula had personally launched PR2P in March.

“We have been working from 6am to 6pm. At first we would sign a register, then we were told that we won’t be signing anymore,” said Bodiba.

He said they had expected a R3,500 stipend for the first three months.

“There was always some story told when we had to get paid. Towards month end, we would be told during a meeting that people from PRASA are asking for proof of accounts. We would submit in a hurry only to be told to wait for two more weeks,” said Bodiba.

He said the last time they saw the MKMVA recruiters was in July. They were told at the time that things were finally looking up regarding their payment.

Raisibe Phiri, from Mamelodi, who was stationed at Greenview, said, “I was hopeful we would get paid because we were always told that it’s still in the process. That we would even get backpay.”

“It’s been hard working here. There are no toilets. We relieve ourselves in the bushes nearby,” she said.

Getting answers for PRASA

A group of about 50 patrollers went to PRASA’s offices in Pretoria on 2 August, and spoke to Lesetja Ramafi, who said he is in charge of PR2P, according to Bodiba.

Bodiba says they were told that PRASA had warned MKMVA not to deploy people to stations because PR2P was on hold. PRASA was told by MKMVA that people “were just helping for free; they didn’t expect anything”.

Ramafi refused to comment on whether he had in fact said this and referred us to the PRASA spokesperson.

Since 20 August we have been in contact with various spokespeople at PRASA and we have made strenuous attempts to get comment and clarification. We have been promised a response numerous times but nothing has been forthcoming.

When PRASA Chairperson Leonard Ramatlakane was questioned about the PR2P in Parliament this month, he said that the PR2P was “a kind of voluntary function” but said that the programme’s “rollout had been slowed down for training”.

He said that PR2P workers require training and PSIRA compliance. Ramatlakane described the PR2P workers as “volunteers” that would receive a stipend from PRASA, like the Expanded Public Works Programme.

At the launch of PR2P in Langa in March 2021, both Mbalula and Ramatlakane said publicly that people would be paid stipends for their time volunteering.

Bodiba said that each month the MKMVA recruiters told the patrollers to submit their banking details.

Bodiba said the volunteers returned to PRASA’s offices and were told to write a letter and give their names.

“We are still waiting for an appointment from a legal aid office in Pretoria. We are taking legal action,” said Bodiba.

MKMVA Gauteng provincial secretary Solomom Matebisi said, “It was just members who acted according to their own accord. There was no participation of the MKMVA as a structure in that intake.”

MKMVA Tshwane Regional Secretary Sibusiso Eugene Masilela said, “As MKMVA Tshwane Region we have never sanctioned any recruiting for PRASA employment. Also we never had any agreement of any nature. Those who acted on such did so on their own accord.”

He also said: “We would like to make it known that as an association we distance ourselves on the matter. We also like to put on record that those who did that committed a criminal offence and should be brought to book.”

When we visited Pienaarspoort station in August, volunteers Edward Riba, Kgabo Mokwele and Ntombizodwa Mahlangu were the only volunteers working that day.

Riba said he started to guard the station in late March.

“Even though we found out that PRASA doesn’t know us, I can’t just give up. I have given up most of my time. I can’t let it go to waste,” said Riba.

Riba, a father of four, had been staying at Skierlik informal settlement in Mamelodi. He lost his job as a security officer in 2019. Although he wasn’t convinced by MKMVA, he says he was told that “doors would open” and this gave him hope.

“What if the PRASA people come and pay others or hire others? We have to continue coming, so that we get our money or placement,” a volunteer said.

Her fears are founded on other volunteer patrollers, who have come via community policing forums (CPFs).

Phomolong informal settlement residents said that during the lockdown in March last year they came up with an initiative for CPF members to patrol Greenview Station, which was being stripped bare by vandals. The initiative spread to other stations in Mamelodi, according to residents.

Bodiba said that when they called Lesetja Ramafi he told them MKMVA knew the truth from the beginning, and that PRASA had paid volunteers from the previous year on 31 January 2021.

Again, Ramafi would not directly confirm this.

PRASA fobs us off

We sent PRASA spokesperson Banele Ndlovu a list of questions by email and WhatsApp on 24 August. During a follow up call on 30 August, Ndlovu suggested that GroundUp was out to get PRASA.

“Last week I replied to questions your colleague from GroundUp sent. Now it’s you. It’s as if when they work on a story involving PRASA, they invite other reporters in other areas to do the same. Why is GroundUp only focusing on PRASA. Don’t you have other matters that you focus on?” asked Ndlovu.

He said it didn’t matter whether he responded or not because GroundUp was out to get them. He promised to check his emails and respond the next day as he had just returned from Russia. We are yet to receive a response from him.

Next:  Taps dry for three weeks in rural KwaZulu-Natal

This article is correct. Volunteers from Mamelodi were not paid a cent. Attridgevill as well. Soshanguve-Mabopane corridor volunteers were paid R2,700 in January and were told that the stipend was for December. When asked why the R2,700 instead of R3,500 for volunteers and R5,500 to R6,000 for section heads, they said there was a mix-up at the Community Safety Office that needed to be fixed – specifically Mr Masilela, the paymaster at MEC's office. Nothing was paid. They kept on telling us one story after another. In February, they paid Mabopane Corridor volunteers R2,500. indicating that it was for January but about 14 patrollers were not paid since the first payment. Again Mamelodi and Attridgevill were not paid. They promised us contracts as of March but nothing happened. When you question them, you are threatened.

All the stories are true. Lesetsa Ramafi is corrupt and he must be arrested. Only 70 volunteers were hired from Mamelodi - I am part of the selected volunteers. PRASA has the list of top 40 volunteers who were supposed to be integrated in July this year. The program was stopped because Lesetsa said PRASA doesn't have money. They stopped the program saying they will hire us during the looting but a private company was hired by PRASA to guard the property. When Chairman Solly Mahlangu asked, they said it's just for the riots. The program said it was going to hire 5000 people residing near the station but we are being exploited.