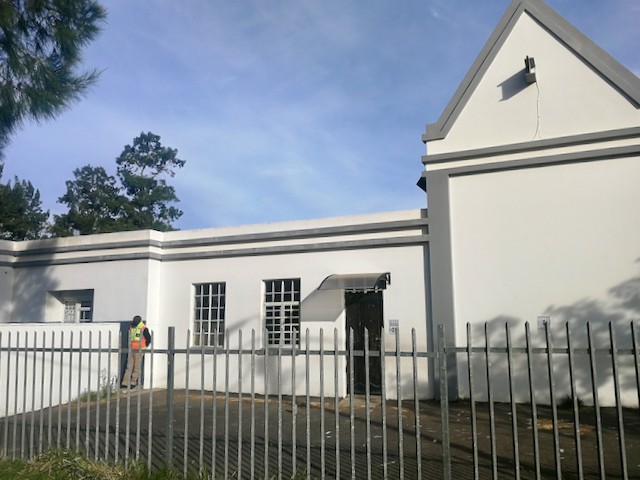 The governing body of this school is unhappy with the R138,000 a month rental for a building they say is unsuitable for the Buffalo City Inner City Primary School in East London. Photo: Johnnie Isaac

On Monday a group of parents shut down Buffalo City Inner City Primary School in East London in protest over what they claim is an inflated lease agreement for an unsuitable property. They say the building in Regent Street, Eureka, is too small for 300 learners and teachers.

GroundUp has seen the lease between the Department of Education and property owner Griff Hawkins of Triplejay commencing 1 May 2021.

At R120,000 per month plus VAT, parents say that the department is not getting value for money. The rental rocketed by R90,000 when the education department signed the lease, says Chairperson of the 2020 school governing body (SGB) Zandi Ngqekeza. The rental excludes electricity, water and municipal services.

The Previous tenant, Estha Wallis of Advance for Life School, refused to confirm if she had only paid R30,000 per month, but said she had as a non-government organisation received a discount from Hawkins.

The SGB insists Wallis told them her rental was only R30,000.

Hawkins said he has been advised by the Eastern Cape education department not to comment about details of the current lease or the previous lease.

Chairperson of the current SGB Thabo Mandila said they are not happy with the building. “There is no playground for our children and the environment is filthy. There are snakes and mosquitos here. We do not think that our children are safe because a snake was killed after it was found in a Grade 3 classroom [last week].”

He said parents have taken a decision to temporarily halt teaching and learning from Monday until the education department finds an alternative venue. The school has not reopened this week.

Parents are paying R1,000 per month to the school but the conditions are not those of fee paying schools, he said.

Provincial education department spokesperson Malibongwe Mtima confirmed that the school, formed in 2019, was not ideally situated. But there was no alternative site at the time, he said, and that is why the lease agreement was extended.

He said the lease ends in December to coincide, which coincides with the completion of a new building for an existing school. Inner City Primary will take over this existing school’s old building.

The SGB has also accused the former principal of financial mismanagement. Ngqekeza said, “We laid a complaint against [the former principal] last year, but nothing was done until October … Instead of suspending her she was given a post at a different school.”

“We discovered that she was using the school credit card for personal items … without the consent of the SGB and was not submitting invoices to our treasurer.”

Asked about the allegations, the former principal said she was unable to comment.

Spokesperson Mtima confirmed that the principal was being investigated. He said she was transferred to a different school, pending the outcome of the investigation.

Next:  Parents shut down schools and clinic in Pietermaritzburg