Parents make desperate plea for placement, but schools are full

More than 8,600 Western Cape learners have not yet found places 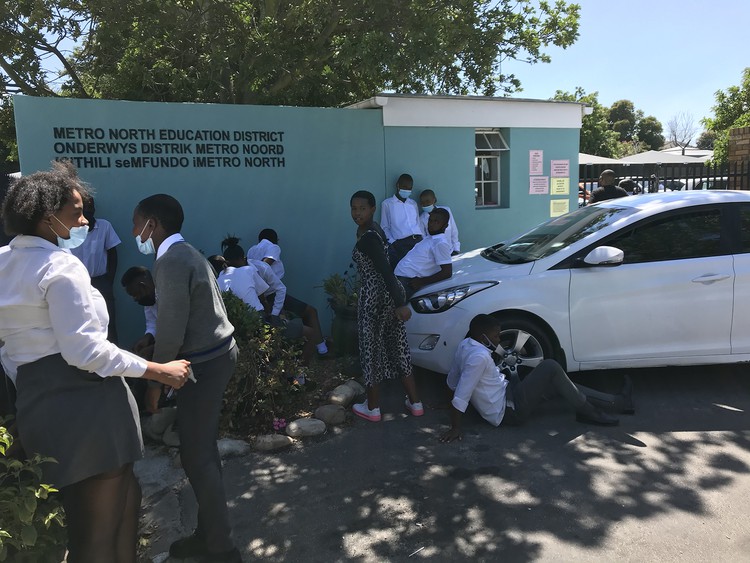 Parents and learners have been gathering outside Sinenjongo High school in Joe Slovo park in the hope of finding placement at the school. They are among more than 8,600 learners still to be placed at schools in the Western Cape. Photo: Peter Luhanga

In a desperate attempt to find placement at a school for their children, about 100 parents hired taxis to travel to the Western Cape Education Department’s offices in Parow last Friday

This followed nearly a week of their own unsuccessful attempts to get their children into the nearby Sinenjongo High school in Milnerton’s Joe Slovo Park. Dunoon Ward Councillor Lubabalo Makeleni also accompanied the parents as scores of children in the area are struggling to find spots at a school this year.

In an email following the meeting with the parents, Wendy Horn, the education department’s director for the metro north district, said there were 42 unplaced learners who applied to Sinenjongo High, and an additional 211 unplaced learners for Inkwenkwezi Secondary in Dunoon.

Horn said she met the principals of Inkwenkwezi and Sinenjongo who agreed to enrol the learners that had applied by the 17 March 2020 registration deadline.

She said the schools will contact those parents this week. Also, an urgent request for mobile classrooms to be placed at the schools has been sent to the provincial education department’s head office.

Since schools opened on 15 February, many of the parents and children who met with department officials in Parow, have been gathering outside Sinenjongo every morning pleading for placement.

Several parents said that they had already paid R10 to Sinenjongo for registration forms and thought it meant that their children would be registered. Other parents claimed they had registered their children in March last year and were shocked to be told they were in fact not registered.

Joe Slovo resident Yoliswa Mhambi is the guardian of 15-year-old Unam Mhambi who arrived in Cape Town from the Eastern Cape in January this year. Unam was hoping to enrol in grade 10 at Sinenjongo High after having received his grade 9 report and transfer from his old school.

Mhambi said she had already bought his school uniform. She said she tried to register him in March last year, but his name does not appear on the Western Cape education system.

Sinenjongo High Principal Khuselwa Nopote confirmed that her school was full. She said the physical distancing required due to Covid-19 meant fewer learners could fit into classrooms.

Nopote said parents were not taking into account that the school also retains its learners up to grade 12 because “there are no dropouts like before”.

She also said there were four primary schools for Dunoon and Joe Slovo and only two high schools, being Sinenjongo and Inkwenkwezi.

MEC for Education Debbie Schäfer’s spokesperson, Kerry Mauchline, said about 10,500 learners in the province had not yet been placed by 19 February.

On Thursday, 25 February, the department’s Bronagh Hammond, said 8,652 of the previous week’s 10,500 learners were still unplaced. Hammond said that 1,800 of the 8,652 unplaced learners were from the metro north district.

“Many learners have been in the system, but are from the Eastern Cape. Others are going from grade 7 to 8 while others are starting school for the first time,” she said.

Mauchline said: “The reality is that our budget simply does not meet the demand for school places in our province. With an average of 22,000 extra learners each year, we would need to build 22 schools just to keep up, before we even begin to tackle the backlog.”

Learners are taught outside at tiny rural school