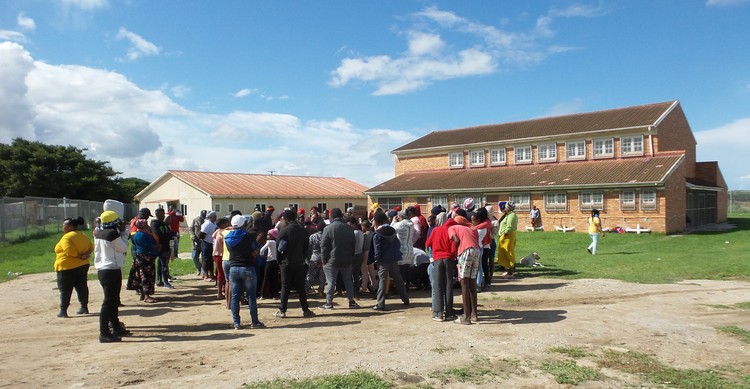 Learners and parents in Colchester protest at the local community hall demanding that the Eastern Cape Department of Education provide scholar transport to a school about 10 kilometres away. Photo: Joseph Chirume

More than 100 people in Colchester, Eastern Cape, on Monday briefly blocked the N2 freeway in protest against the Eastern Cape Department of Education’s failure to provide scholar transport.

Two men are due in the Motherwell Magistrates Court soon for public violence, damage to property and obstructing traffic following clashes with police during the protest.

Parents say they can’t afford to pay for transport to Kinkelbos Primary about 10 kilometres away and as a result learners have not gone to school since January. They also complained that the closest school, Colchester Primary, is an Afrikaans medium school. Kinkelbos is a Xhosa medium school.

Sibahle Swartbooi’s three children are at Kinkelbos Primary. She is a receptionist at a local lodge. “Children are becoming delinquent because they have nothing to do. Some have started indulging in drugs and alcohol. Others go fishing in the river which is dangerous because they can drown,” said Swartbooi.

Swartbooi’s 13-year-old daughter Kazima is in grade 7. She wants to study information technology and worries she will have to repeat the year.

Grade 6 learner, Unathi Ntantiso, 12, said her dream is to be a nurse. “It is very stressful. We have been waking up every school day for the past three months and waiting in vain for transport to school,” she said.

Parent and chairman of the Kinkelbos’ school governing body, Mthandazo Laurence Kopele, said their pleas to the provincial department of education have been fruitless. Kopele was one of the two men arrested during the protest on Monday.

“Parents decided to briefly close the N2 so that our grievances could be heard by the relevant officials,” he said.

Kopele said 146 children have been stuck at home since January. He said the problem dated from last year with the contractor only able to transport 80 children per day. “The service provider said he was only paid for one trip in the morning and a return trip in the afternoon. Kinkelbos primary school is 10km away. Most parents are poor and cannot afford a R20 taxi fare for a return trip every day,” said Kopele.

Eastern Cape Department of Education spokesperson Mali Mtima said negotiations were underway between his office and the transport department to resolve the matter.

Next:  Labour department rules that classrooms at Limpopo school are too dangerous to use