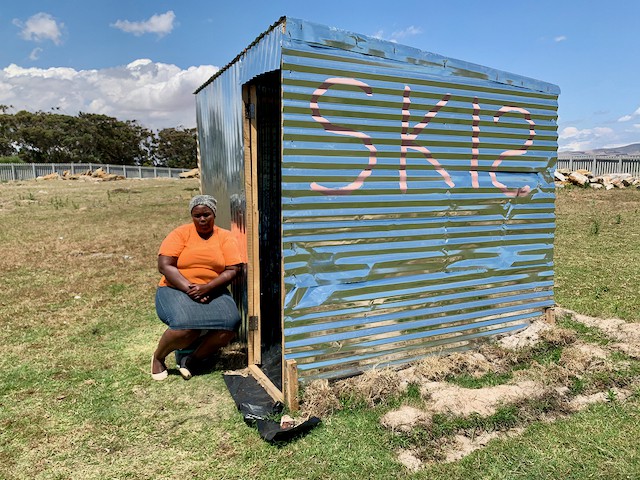 Thoko Nkanunu, who was relocated as a teenager together with her parents to Wolwerivier from Frankdale informal settlement, now has three children of her own. She has occupied vacant land to accommodate her family. Photo: Peter Luhanga

Families that moved to Wolwerivier temporary relocation area years ago have started to occupy vacant municipal land as the settlement has become overcrowded.

The land being targeted is a fenced in Incremental Development Area. The City of Cape Town has placed armed guards round the clock on the site and sent in the Red Ants. But four families have managed so far to erect shacks.

Wolwerivier was set up in 2015 to accommodate people from various settlements as they waited for proper housing. About 250 families came from an informal settlement called Frankdale next to the Vissershok landfill site, a few kilometres south of Wolwerivier. People have also since come from other informal settlements across the city, including as far afield as Delft.

Despite the overcrowding in Wolwerivier, the City has also tried to relocate four families facing eviction from Bromwell Street in Salt River to Wolwerivier. The residents are currently awaiting the outcome of a court case challenging the lack of suitable alternative accommodation available to them.

The one-room units in Wolwerivier cannot accommodate growing families; in some three generations live in a single room, and they claim the City prohibits extensions to the units.

Thoko Nkanunu, 22, was born in Frankdale. Like most residents her family had eked out a living by scavenging at the Vissershok landfill site. She is now a mother with three young children. She is one of the four residents who have managed to erect shacks, a beacon of hope for others desperate for housing, she says.

Lindiswa Gada said when she was moved from Frankdale, the City had said they would receive permanent homes after five years.

She said Wolwerivier lacks services. “When we want to seek medical attention we go to the Dunoon Community Health Centre. A return taxi fare is R52. We have no schools, no shops, everything is far away.”

“There are no job opportunities around this area. We are struggling here,” said Gada.

Some residents told GroundUp they’d rather go back to the landfill site as even though the living conditions were tough, at least they were able to make a living.

Mayco Member for Human Settlements Malusi Booi said the registration of Wolwerivier beneficiaries was tightly controlled and larger families applied for, and received, two units instead of one.

“The original development with the original beneficiaries was designed with sufficient space to accommodate the families, including the larger families. Many have unlawfully rented out their units and have unlawfully done extensions to the units,” said Booi.

“Some people have asked to extend, but then it is for renting out the space and in many instances, it is not even for relatives,” he said.

Next:  Covid-19: Trains overcrowded as rail service battles to keep up with demand

Previous:  Millions of rands of housing materials dumped since 2018