“Our children can’t play outside any more” say Hillview residents 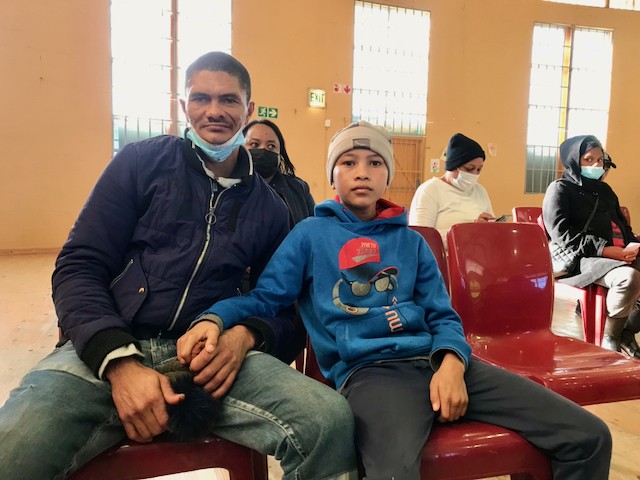 Micaheel, who was hit by a stray bullet while on his way to the shop, with his father, Igshaan Pedro, came to share their story at a public meeting on rising crime in Hillview. Photo: Tariro Washinyira

Hillview residents in Cape Town are angered by gangsterism in their community and a lack of visible policing. They are calling for an emergency meeting with state officials.

At a meeting on Wednesday, the residents

demanded officials of the Western Cape Province, City of Cape Town Law Enforcement, and the South African Police Service (SAPS) give them “tangible safety and security measures, an operational plan and specific time frames” to deal with crime in Hillview.

“Shootings happen all the time. They just shoot, even in the yard. Our children can’t play outside anymore … You can’t even stand by your gate,” said resident Liticia Matthews.

Her nephew, 12-year-old Micaheel, still has a bullet lodged in his head after being shot in April.

His father, Igshaan Pedro, said Micaheel spent three months at the Red Cross children’s hospital. The doctors say it is still too risky to operate.

Pedro said his son was hit by a stray bullet from a gang fight while on his way to the shops. They have not heard back from the police since they opened the case. “The police rarely patrol and they are scared of gangsters,” he said.

DA ward 45 councillor Mandy Marr said that according to a count done by the community, 176 people have been killed over the past three years.

“Today I was in Hillview and you hear gunshots all the time. SAPS is extremely understaffed so we are working with the neighbourhood watch and street committees,” she told GroundUp.

“Gangsters target children going to school to bring them into the gang. I had a mother and child coming here in an absolute state because they tried to recruit in front of her. When she said leave, my son alone, they said we will shoot your son right in front of you and don’t tell us what to do.”

She said SAPS had identified a spot to place a satellite police station in Vrygrond. “We are working with the government towards having a permanent police station,” she said.

Chairperson of Hillview Guardians Neighbourhood Watch, Carl Abraham said, “When tyres are burning and people protest because of frustration, law enforcement comes quickly because they want to fire rubber bullets at people. Where are you when the shooting is happening?”

Lorraine Moko of the Community Policing Forum (CPF) in Muizenberg said police should provide helmets and bullet-proof vests to them. She said CPF members put their lives on the line because the police are failing. “Our lives will not wait for police politics between national and provincial government,” she said.

Community Safety MEC Reagen Allen said, “We will keep holding SAPS accountable on the satellite station. We will engage other cabinet colleagues to see how we can integrate cultural, sporting activities in educational programmes and schools safety.”

On Thursday, police spokesperson Andrè Traut said, “Sufficient numbers of police officers are deployed in the Muizenberg area to provide an effective service to the community.”

Next:  Officer accused of murdering a homeless man is still employed by City of Cape Town