“I am not the government!” RDP homeowner tells community desperate for water from his tap 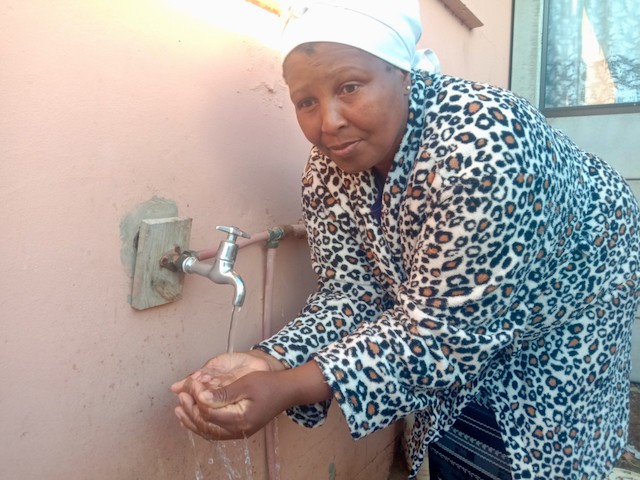 Neliswa Mnikina of Chris Hani in KwaNobuhle, Kariega, has one of only four RDP houses with running water. She said she can’t supply the whole area. Photos: Thamsanqa Mbovane

“I can’t supply the whole village with water! I am not the government!” says Patrick Yayi, of Chris Hani village in KwaNobuhle, Kariega.

“At night, I hear people intruding into my yard and going straight to my tap. When I wake up and shout at them, they hurl insults at me – all kinds of insults.”

His RDP house is one of four houses out of about 1,000 RDPs that still have running water in Chris Hani village. Taps have been dry there for two months.

There are about 5,000 residents and they rely on just one 5,000-litre Jojo tank in Saxhwila, opposite the four RDP houses that have water. When the tank runs dry, people turn to the home owners.

He said the last municipal bill he received was in April and it was about R13,000. (We were unable to verify this.)

His neighbour, Neliswa Mnikina, said, “I only supply water to my relatives which are about five families. I can’t supply water to Chris Hani. People won’t be there in court when the municipality sues me for having a huge unpaid water bill. I have to lock my gate every day.”

Ward 46 Councillor Ntobeko Nqakula conceded that Chris Hani is one of the worst areas hit by the Nelson Mandela Bay water crisis. “Unfortunately, there are only a few [water] trucks in the city. It’s now been over 50 days that Chris Hani has had no water in taps.”

Nqakula explained that there were originally two Jojo tanks in the area, but one was damaged when people tried to steal it and so it had to be removed. 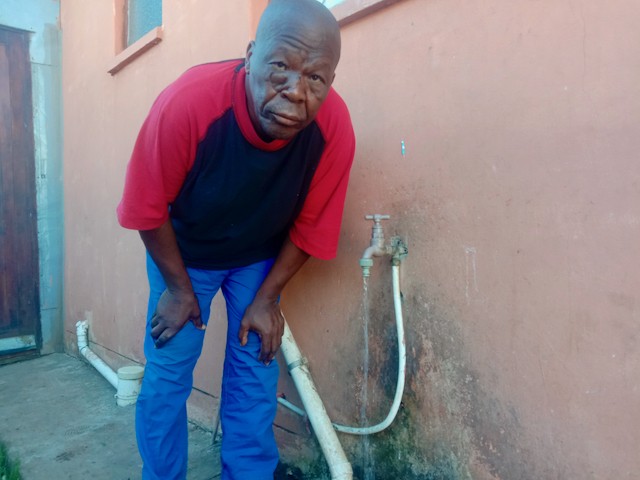 “I’m not the government!” says Patrick Yayi, of Chris Hani in KwaNobuhle. His house is one of only four with running water in the area.

Next:  SASSA in Khayelitsha closed until further notice, says agency