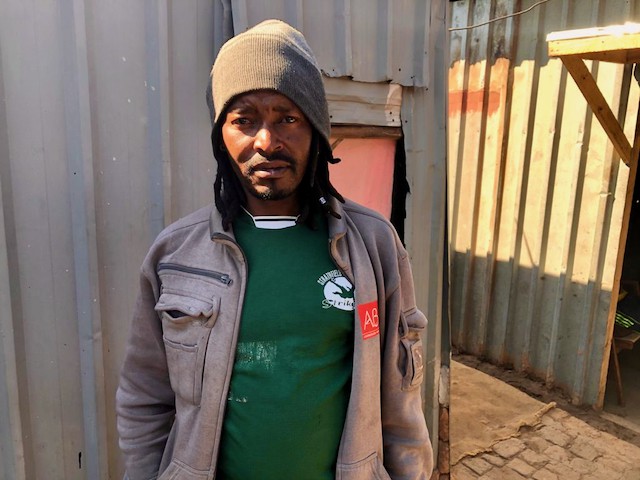 “In places like Daveyton and Tsakane, foreign nationals with passports have been given stands. I can afford to build a house for myself. Why should l be left out in the allocation of stand numbers? I have been actively involved in fighting for this place,” said Bongani Phiri, a resident of Old Brakpan Location informal settlement. Photo: Kimberly Mutandiro

Residents of Old Brakpan Location informal settlement are unhappy with the Ekurhuleni human settlements office for not yet allocating them stand numbers. They also accuse officials of not adding them to the database of a Mega Housing Project that is meant to benefit their community.

On Wednesday, residents took to the streets in the early hours, burning tyres along Hospital Road and blocking roads into the informal settlement.

They are demanding transparency in the allocation of stand numbers to community members, and that people from Mozambique, Lesotho and Swaziland should also be included.

Residents accuse community leaders of corruption and excluding immigrants. They claim that stands belonging to immigrants are being sold off to outside bidders for R1,500.

The land occupation, in the historic Old Brakpan location site of apartheid forced removals, has seen a power struggle between the ANC and EFF, at times violent. Also involved are people who were forcefully removed and see themselves as the rightful land owners.

Originally there were 35 families, but now there are about 1,500 people in the occupation. Among the first occupiers in 2016 were immigrants.

The department began allocating numbers to shacks in the first week of May, but the process stopped days later.

Lesego Khumalo said, “Our main concern is our corrupt community leaders. Not all of us were allocated shack numbers. This is of great concern because we all want to be in the housing database.

“Community leaders have been putting pressure for stands belonging to foreign nationals to be sold so that they could eat the money. They are accusing them of not qualifying to get land because they do not have SA IDs,” she said.

“Papers signed [after shacks were numbered] only bear signatures from community leaders and nothing from the office for human settlements which opens the whole system to corruption. Our leaders were also asking for ‘cold drink money’ to buy spray paints. They should just allocate everyone stand numbers,” said Khumalo.

Mondi Hans said, “These community leaders are causing xenophobia and exploiting foreign nationals. As we speak there are scams where some foreign nationals are being made to pay sums of money for non-existent SA IDs in the name of qualifying for housing. This should stop.”

Chairperson for the community’s leadership Derick Shabangu denied allegations of corruption. “The Department for Human Settlements told us that the delay was caused by a shortage of spray paints. Even though l told people the response they insisted on protesting.

“I forwarded all concerns, including those of foreign nationals who want to be given stands, to the Department. It told us that numbers will be allocated to everyone but said it would follow protocol.”

He said he was aware of the sale of stands belonging to immigrants, but denied being involved in it.

William Mutsamaise, of human settlements, said, “We are building more than 7,000 houses for them and other communities … The problem is that the people do not trust their leaders.”

He said the process of allocating stand numbers will continue on Monday.

Bongani Phiri, from Lesotho, has a South African wife and has been guarding his piece of land while she is away staying with relatives in Tsakane. He said he was being threatened.

“Why should l be left out in the allocation of stand numbers. I have been actively involved in fighting for this place,” he said.

Previous:  Eastern Cape villagers have to cross a river to reach their nearest clinic