The marquees were set up on City land without its permission 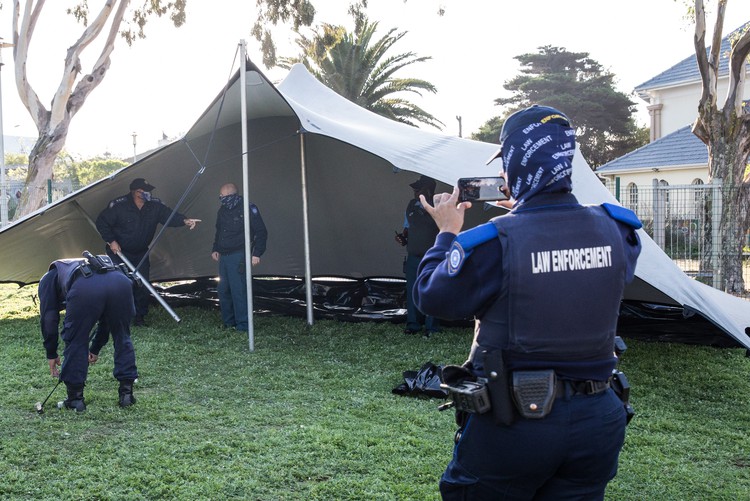 City of Cape Town law enforcement officers removing one of the marquees on the Village Green in Observatory on Tuesday. Photo: Ashraf Hendricks

The City of Cape Town has removed two large marquees put up by an Observatory resident to house homeless people ahead of the cold front which made landfall on Wednesday.

The two 6x9 marquees were set up by Obs resident Terna Gyuse and a few volunteers on Tuesday afternoon at the Village Green. The space where the structures were set up belongs to the City and Gyuse did not have a permit to erect something there. The City’s law enforcement officers arrived soon after it was erected to tear the tents down. This was later confirmed by Wayne Dyason, spokesperson for the City’s Law Enforcement Department.

Gyuse is a member of the Obs Covid Action Network (CAN). He said the decision to set up the marquees was his own and not that of the CAN.

In April, the Obs CAN emailed the City, asking for assistance with the homeless community in Observatory. In response, the public toilets were reopened for sanitation and water collection.

In an email sent to CAN on 7 May, Zahid Badroodien, Mayco member for Community Service and Health, said, “No tents will be allowed to be erected on City property. We are in the process of increasing bed numbers at shelters. Anyone looking to access shelters will be assisted accordingly.”

However, Gyuse said after seeing many people struggle on the streets during bad weather and heavy downpours, he decided to erect the marquees at a cost of R20,000.

“I was not prepared to watch my friends get soaked again,” he said.

“This was not an occupation but rather a temporary measure to assist the homeless with the incoming rain. As soon as there is better shelter we will be the first to come and take them down,” he said. The marquees would only accommodate about 20 people, he said.

After the group had erected the marquees, law enforcement officers approached and asked them to take the marquees down. “What you are doing is good, but you need to do it the right way,” said one officer. By this time over 15 officers were on scene and began dismantling the structures as dozens of people watched.

GroundUp spoke to a man who identified himself as Patrick. He has been homeless for almost 14 years. While watching the marquees being torn down he said, “They (the officers) will go home to a warm bed, shower and hot meal. Whoever is telling them what to do, don’t give a damn about us homeless people,” he said.

Patrick explained that he used to live in Bonteheuwel and would rather live on the streets than return to an environment “too dangerous due to gangsterism”. 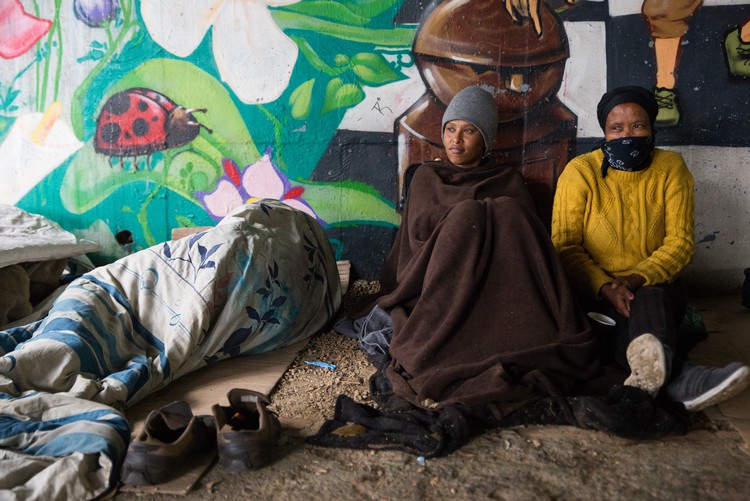 When it rains, many people sleep under the Station Road bridge in Observatory. Anestasia Bezuidenhout (left) has been homeless for five years and Janie Peters for 11. This area was completely filled on Tuesday night when the storm hit. Photo: Ashraf Hendricks

Without the marquee, Patrick and many others will be sleeping cramped underneath the bridge next to the Observatory train station.

On Wednesday, Badroodien reiterated the message he had sent in response to CAN last month. “Street people who would like to accept assistance have the option of making use of the shelters across the City. A list of all shelters can be accessed on our website. The City can’t force individuals to accept assistance but can only offer the services available,” he said.

Gyuse said that he understood that his actions were in contravention of the bylaws but said that “these are not normal times”.

“If you can’t break a bylaw now to keep people out of the rain during a pandemic… It just tells us everything we need to know,” he said.

I was disgusted to read that a good deed was stopped like that. The CoCT has double standards. They cannot provide accommodation themselves, but would not allow good Samaritans to assist.

So, a person doing a good deed from the bottom of their heart is punished, yet on the other hand, a homeless person can erect his/her own tent without interference from the CoCT.

We have been waiting for more than 2 months for the CoCT to "take down erected tents" in Durbanville, but we are constantly met by excuses and passing the buck. So, I wonder whether the CoCT will take down my tent down if I pitch it next to the homeless' tents?