Mud school has one broken toilet for 175 learners and staff 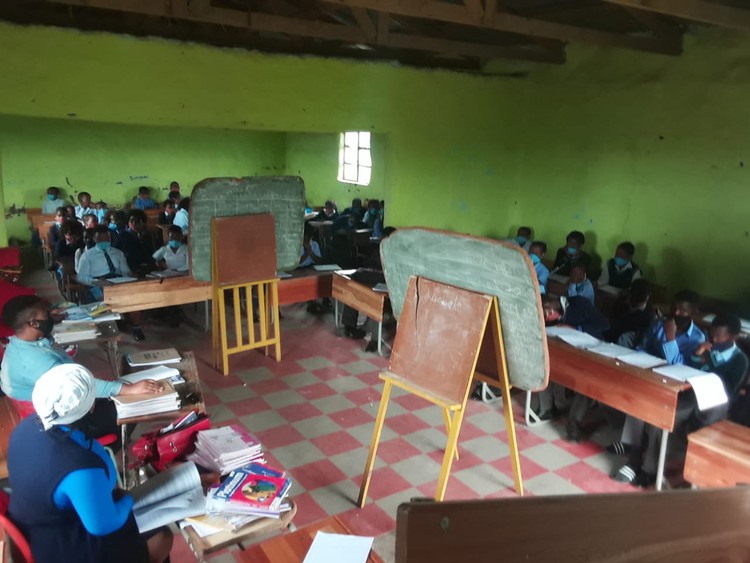 Masizame Junior Primary School in Centane near Butterworth, Eastern Cape, has one broken toilet for girls and teachers. The boys have no toilet at all.

In strong winds, the learners are taught outside in case the zinc roofs blow off.

The school was built by parents in 1996, with each family donating R5 to build the mud classrooms.

This school has 175 learners from grade R to grade 7.

Classrooms have cracks, the roof moves when it’s windy, and water comes in when it rains.

Girls and teachers share one toilet with a broken seat. Mostly they relieve themselves behind the classrooms. Boys have no toilets at all. They use the bushes outside the school.

School Governing Body (SGB) members say the Eastern Cape Department of Education promised to rebuild the school in 2016 but that never happened.

According to the national minimum norms and standards set by national education Minister Angie Motshekga in November 2013, all schools built out of wood, zinc, mud and asbestos should have been fixed or replaced by November 2016.

School governing body chair Roy Magandana said for the past ten years parents had been begging the department to build them a proper school and the department had kept making promises. But, he said, the last time the department officials visited the school was in 2016 to introduce a construction company to build the new school.

“When they left they told us to look for a liaison officer for the project. We asked young people to submit their CVs for the position but the department never returned,” Magandana.

Then this year, he said, the department had changed its tune and told the school to use the maintenance budget to fix the broken classrooms and toilets.

“Who can build a school with R39,000?,” asked Magandana. “We are not talking about broken windows and cardboard. For years we have been trying to save these classrooms from falling [down], using cement. That can no longer help.” 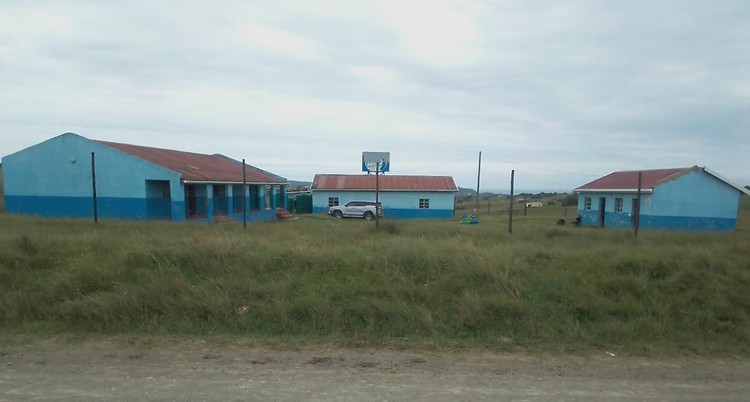 When the wind blows too hard, classes are moved to outside. Photo: Nombulelo Damba-Hendrik

The grade R classroom is also used as a kitchen. The grade 3 classsroom is used for teaching and as a storeroom, staff room and principal’s office. Grades 4, 5, 6 and 7 share a school hall with old zinc roofs. While inside you can see the sky. Only grades 1 and 2 are not sharing classrooms. The school principal teaches grade 3 classes as well as her other duties.

Magandana said when the principal had visitors or a parents’ meeting she had to dismiss the class and ask the learners to play outside until she finished the meeting.

When the wind blows hard, he said, all classes move outside because they are afraid the roof might blow off.

Mtima said the school had been marked for closure and notifications had been issued. He said “all stakeholders” had been consulted, but Magandana disputed that.

“This school is closer. We can’t risk sending our children to schools 4km away for safety reasons, and that would mean we would have to wait until the kids are old enough to walk on their own before starting schooling,” he said.

Mtima said in the Eastern Cape 12,000 classrooms needed to be built and R13.7 billion was required for this. Budget deficits precluded the Department from responding adequately to requests for classrooms. “At this stage, the backlogs are insurmountable, and schools are urged to implement teaching strategies such as platooning, innovation scheduling of timetables; and rotation, as alternative solutions to address these challenges,” he said.

He said the department would deliver mobile toilets as an interim measure. 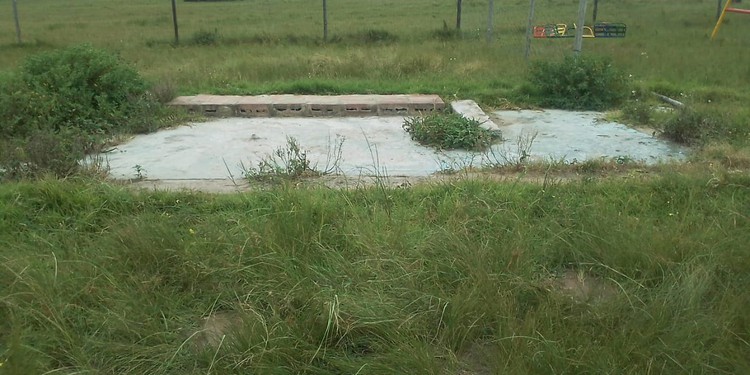 The cement slab where the boys’ toilets used to be. Photo: Nombulelo Damba-Hendrik

Next:  Plea for Mozambican government to locate Cape Town man

Previous:  Leading research institute says there should be no new trials of hydroxychloroquine for Covid