No trains operating in the Eastern Cape for over two months 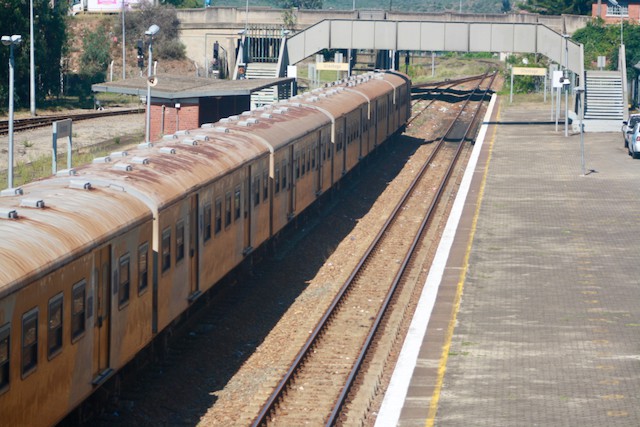 A train stands rusting in Uitenhage main station. Trains are not operating at all in the Eastern Cape. Photo: Thamsanqa Mbovane

Two months ago, train services quietly ground to a complete stop in the Eastern Cape. It has gone largely unreported that since 7 January there have been no trains operating in the province – neither metrorail nor other trains running between Kariega, Gqeberha and East London.

The Passenger Rail Service of South Africa (PRASA) says a “decision was taken to suspend services due to operational challenges on the rail network”.

“Theft and vandalism have been prevalent on the infrastructure and network. Trains are not operational in the whole province,” she confirmed.

To travel from Gqeberha to Kariega by taxi costs R25 and by bus costs R18 per person. By contrast, the train used to cost R9.50.

In September 2021, GroundUp reported on how the trains service was busy collapsing in the Eastern Cape, with train stations stripped bare and electric cables stolen.

A PRASA access controller and ticket checker in Kariega said, “We are getting paid monthly despite doing nothing every day.”

Katsio said PRASA has 739 employees in the Eastern Cape. Employees are coming to work even though trains have stopped running. “Operational departments are conducting refresher training,” she said.