Newcastle school for the blind in desperate need of funds

In 2011 Zethu Magubane was a fashion designer, but then she lost her eyesight, almost overnight. Today, the 38-year-old mother of two from Manzana village, Newcastle, is the deputy principal of Asimthande School for the Blind, which she co-founded with her husand in February 2018, the first of its kind in the Amajuba district.

‘’I was not born blind … One morning I woke up as usual, and when I went outside I noticed that it was foggy, and later I couldn’t see anything. My husband took me to different doctors for treatment … but … I had gone completely blind,” says Magubane.

‘’With the moral support from my family, especially my husband, I managed to pull through,” she says.

In 2014, Zethu went to a school for blind and deaf learners in Pietermaritzburg, where she did switchboard and Braille studies, and later studied for a computer course at Action School for the Blind, in Scottburg.

“After attending different schools for the blind I realised the importance of a school of this nature in this area as there are many people, especially the youth, who are in the same situation as I am,’’ says Magubane.

Sibongile Manana, who lives in the area, says she had to send her blind son to a school in Durban. “We had no choice but to send our children to other remote cities because we did not have a school like this in Newcastle,’’ she said.

Asimthande School for the Blind now has nine teachers and accommodates 35 learners who come from Newcastle, the Eastern Cape, Mpumalanga and Gauteng. Based in a former handicraft centre for people with disabilities, it has six rooms: a classroom, two bedrooms for male and female learners, a kitchen, dining hall, and an office for the principal which is shared with teachers. Two more classrooms are in a garage building in the same yard.

Funds are a challenge. The school is not under the Department of Education, but is in the process of being registered as a community education and training college.

“We rely on the learners’ tuition fees and donations to run the school and paying our teachers,” says Magubane.

“We accommodate learners from outside Newcastle who need food every day, and we also have to pay for electricity. Luckily, when we opened the centre last year, Newcastle municipality mayor [former Mayor Makhosini Nkosi] donated beds and lockers. But we are still in desperate need,” she says. 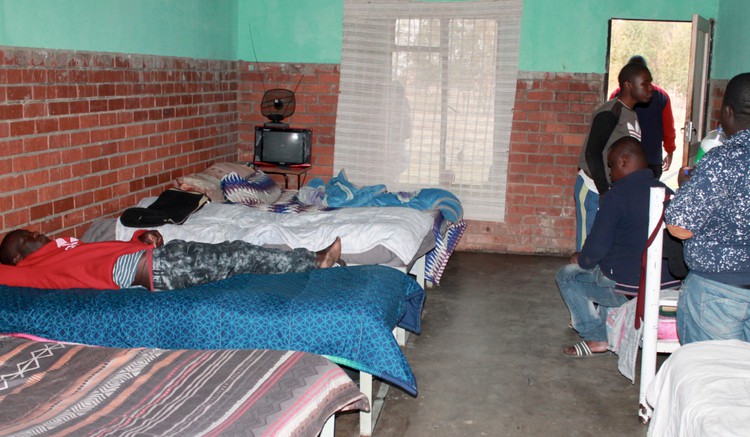 One of the bedrooms for learners accommodated at Asimthande School for the Blind. Photo: Sibusiso Mdlalose

Magubane’s husband, Reverend Cebo Magubane, is the school’s principal. He says the school is supported by various sections of the community, including a non-profit organisation of priests who donated desks and other equipment. But they are still struggling to cover running costs.

“We currently offer Level 1 to Level 4, Grade 10, 11 and 12, Braille and computer studies … We still want to roll out handicraft skills as well,” says Reverend Cebo.

Lindokuhle Mngomezulu of Osizweni township is studying matric at the school. He is 28.

“I am grateful for the opportunity, like this in my birthplace, because most of the blind people from our area had to move to other remote towns and cities … and other provinces to get their education opportunities,” said Mngomezulu.

“Due to circumstances that were beyond my control I had to drop out in Grade 11, and later lost my sight in 2016 … I am determined to get good matric results to enable me to enrol for a law degree at university,’’ he said.

Bheki Thwala, chairperson of Osizweni Disability Forum, said: ‘’A school of this nature is long overdue … We would like to see our local authorities and other stakeholders lending a hand, because we really need a school like this in our area … Blind people also need academic and handicraft skills.’’

KwaZulu-Natal Department of Education spokesperson Muzi Mahlambi said: ‘’The school is an adult education and training centre with blind adult learners. We do not have any background as to how the centre was established. We have only been requested to verify concessions at the centre, and to create an enabling environment during the exams. And with it being also a finishing school, it is not registered by the department, but their blind learners write amended senior certificate examination with us in our registered centre.’’