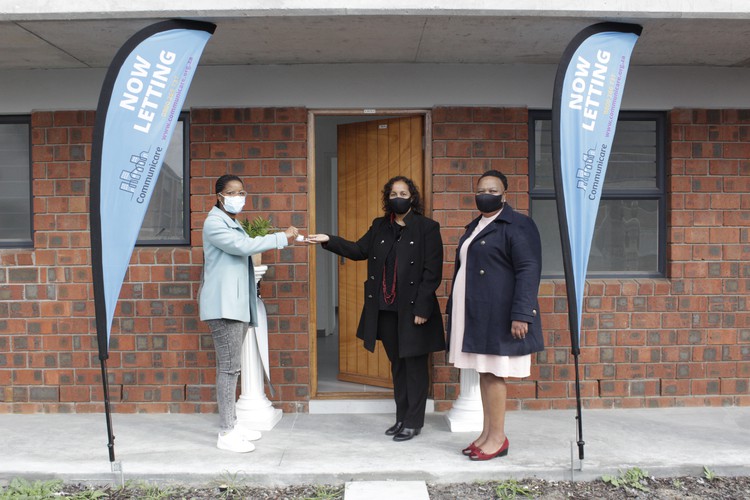 Monica Sokolo receives the keys to her new home from Communicare CEO Anthea Houston and Kholeka Zama, Chairperson of the Communicare board. Photo: Supplied

Social housing institution Communicare handed over the keys to homes in its newest development on 28 July.

The third phase of the Bothasig Gardens development brings 314 homes in a well-located Cape Town suburb to lower-income families. Families earning a combined income of between R1,500 and R15,000 per month can qualify to live in the units. Thirty percent of the units are reserved for families with incomes below R5,500 per month. Communicare CEO Anthea Houston said people who qualify for tenancy in the development would need to earn 100% more to qualify for similar units in the area.

Social housing units are rental-only, under the provisions of the Social Housing Act.

At the virtual launch, Houston said the development gave new tenants an opportunity to live in “an amazing neighbourhood”, with good schools, economic centres, and public transport nearby. She said the homes, built by local black-owned firm EMCOM, were of excellent quality.

Kholeka Zama, Chairperson of Communicare and CFO of Wesgro, Cape Town and the Western Cape’s tourism, trade and investment promotion agency, said that this development was crucial for Communicare’s mission to help build resilient, integrated communities. “We’ve been working on this for several years, and it is a joy to hand over keys to tenants today,” she said.

“These developments are revolutionary as they enable access to affordable housing in high value urban locations,” Zama said. She said the successful completion of the Bothasig Gardens development would help Communicare access other valuable sites for sustain high density developments.

On the long-awaited Salt River Market development, Houston said that Communicare was still awaiting the release of the land by the City of Cape Town, but was hoping for good news this year.

The first set of the Bothasig keys was handed over to tenants on 27 and 28 July. A total of 42 units will be handed over by the end of the month, a further 50 during August, and all 314 units will be occupied by new tenants by November. People who fall within the qualifying criteria are encouraged to apply by email to applications@bothasiggardens.co.za.

Previous:  Battle to stop 22km long mine on Wild Coast