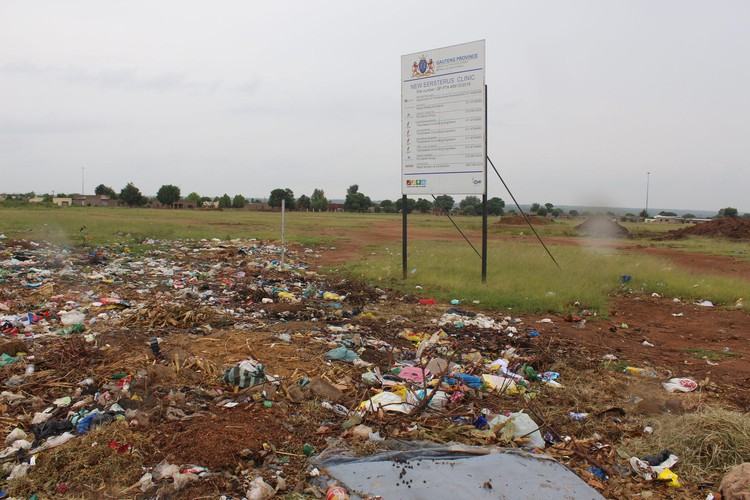 The site for a clinic in New Eersterust, Hammanskraal, Pretoria, is now used as a dump, after the project came to a halt in 2019.

It is almost two years since Rapid Builders & Contractors vacated a construction site meant for building a R68-million clinic in New Eersterust, Hammanskraal, Pretoria. Residents have now turned the site into a dumping area. There is confusion about why the project stopped.

The Gauteng Department of Infrastructure Development (GDID) awarded Rapid Builders the tender on 30 November 2016. What was supposed to have been an 11-month project came to a halt in September 2019 as disputes among members of the project committee and business forums saw the contractor vacate the area. This is according to GDID spokesperson, Bongiwe Gambu.

She said, “The contractor voluntarily left the site citing the involvement of business forums on the project as an issue.”

When GroundUp visited the site recently, residents had started using it as a dump. The fence that had barricaded the area was no longer there, but there remained a construction site sign indicating Rapid Builders as contractors.

Gambu said 15% of the funds from the budgeted amount have been used.

Early last year, Rapid Builders project manager, Shane Govindasamy told GroundUp that constant interruptions from the community could not allow them to successfully complete the work.

It is common for so-called “business forums” to try to get in on the action when new large developments are started. This makes it hard for legitimate companies, especially ones that do not wish to pay what they may see as bribes, to finish developments.

Previously, we failed to locate the business forums in question but recently tracked down the project’s Community Liaison Officer, Isaac Komane, as well as Meyer Mtshweni, the New Eersterust business forum chairperson.

According to Komane, before work began he received submissions from residents, wishing to offer various services to the project. Those who dealt with construction machinery were welcome to outsource if they didn’t have their own.

But then it appears things became chaotic.

“Different groups started coming up,” he said. “I had lists of local businesses from the community that had submitted but people bringing machinery weren’t on my list. The groups were against each other. One group would bring a machine. Another group would object and come with theirs, which caused conflict,” said Komane.

He said the contractors would often find themselves without equipment to perform their duties, which would halt the process for days and sometimes weeks.

“A site manager in 2019 said he couldn’t work that way. Because of constant disagreements, they sometimes worked … one day a week.”

Mtshweni claimed his forum has always existed. “There were differences, yes, but we did not chase the contractor away. We grouped ourselves when the project started and formed partnerships so that people could benefit. Our involvement was that we wanted to make sure that the 30% minimum that belongs to the community is implemented,” said Mtshweni.

Residents in limbo about the clinic

Resident and street vendor, Dinah Mafodi said that most of the residents had no idea what was happening with the project and why it stopped.

“We saw construction vehicles stationed at the site and we were excited that finally another clinic was going to be built. This area grew larger and a new clinic would surely assist those that do not live near the current clinic,” said Mafodi.

Naledi Dube, a resident, said, “We have never had any formal communication regarding the clinic. These are just rumours we heard. We also heard that the clinic was going to operate 24 hours. That was going to be a relief because if a family member gets sick, then we wouldn’t have to go far.”

New Eersterust dates back to the 1960s. The new clinic was a welcome relief for residents who currently share one small clinic. Some residents have resorted to using Boikhutsong clinic in Tswaing, about 6km away, and Jubilee hospital in Hammanskraal, about 7km away.

Will there be a clinic?

In an emailed response to GroundUp a year ago, Gambu said, “GDID is engaging with Rapid Builders through legal directorate regarding their contract obligations. Once this process is done, GDID will advise accordingly.”

In a recent response, she said the department was finalising the final account with Rapid Builders and that a new provider will only be able to start work once they have signed a service level contract.

So not much progress appears to have been made.

Next:  How to vaccinate millions as quickly as possible

Previous:  Paddling to progress: The Soweto Canoe and Recreation Club