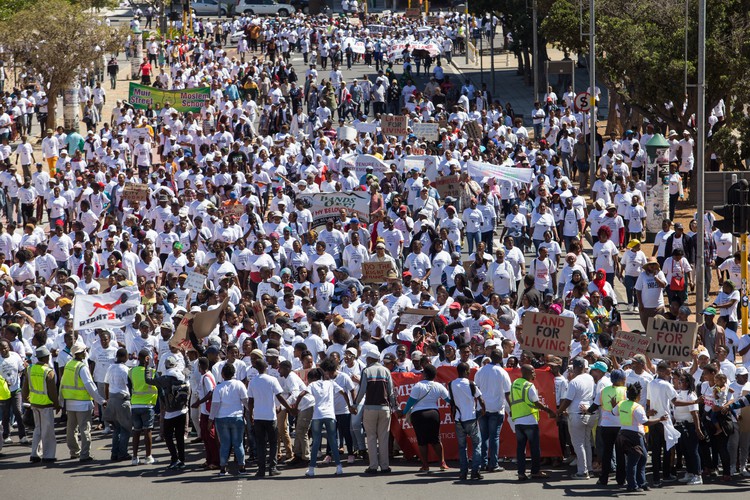 Protests and large gatherings are often the only mechanism available to vulnerable people to express their concerns. Archive photo: Ashraf Hendricks

The South African Police Service Amendment Bill, prepared by the Civilian Secretariat for the Police Service and recently published for public comment, is a comprehensive revision of the legislation governing policing in South Africa to align it with the Constitution.

The legislation being amended includes the Regulation of Gatherings Act 205 of 1993. This gives effect to the right to freedom of assembly.

The Constitutional Court has often recognised the importance of this right. The Court, in Garvis, explained that the right exists to “give a voice to the powerless” and that it is often the only mechanism available to vulnerable people to express their concerns.

But there are a number of issues in the Gatherings Act that put this important right at risk. The Act was enacted before the adoption of the interim Constitution, and the enshrinement of the constitutional right to freedom of assembly. It is, therefore, in need of comprehensive revision to align it with the Constitution. But the Bill falls far short of this.

“Gathering” is a key term in the Gatherings Act on which the level of regulation turns. In particular, the planning of a “gathering” is the trigger for the onerous notice requirements prescribed in section 3 of the Act.

But the definition of “gathering” in the Act is too broad – including within its ambit every group of 15 or more people intended to “mobilise or demonstrate support for or opposition to the views, principles, policy, actions or omissions of any person or body of persons or institution”.

The definition of “gathering” needs to be more carefully tailored to the purpose of the notification requirements. As explained by the Constitutional Court in Mlungwana, the purpose of notification is to ensure peaceful protests. Giving adequate notice allows the police to effectively monitor gatherings and properly plan for the deployment of police to avert disruptive protests.

However, the selection of the number of 15 people as the trigger in the Act for needing to provide notice is entirely arbitrary. There is no clear link between disruptive protest and the number 15. As the Constitutional Court said, “[t]here appears to be no intrinsic magic in the number 15”.

The definition of “gathering” in the Act should be amended so that notice will only be required when a protest is likely to be disruptive or when police deployment is likely to be necessary. This can be achieved by limiting the definition of “gathering” to an assembly with a much larger number of participants – resulting in a definition that is, at least, more closely connected to the purpose of averting disruptive protest. It can also be achieved by limiting notice requirements to certain types of gatherings, which will need to be clearly spelled out in the legislation.

In Mlungwana, the Constitutional Court was confronted with a challenge to a provision in the Gatherings Act that criminalises the failure by a convenor of a gathering to give notice of the gathering in accordance with section 3 of the Act.

“[C]riminalisation has a ‘calamitous effect’ on those caught within its wide net. The possibility of arrest and its aftermath, even without conviction, is a real ‘spectre’ for those seeking to exercise their section 17 right. If convicted, those concerned face punishment, moral stigma, and a criminal record for at least ten years.”

The court accordingly found that the provision was inconsistent with the Constitution and declared it invalid. The Bill seeks to rectify this defect in the Act by deleting the provision. But the Bill does no more than what was directly ordered by the Court.

There are a number of other provisions in the Act that similarly impose criminal sanctions for conduct connected to gatherings.

Section 12(1)(b) of the Act criminalises the failure to attend a meeting called for negotiations regarding the amendment of notices and the imposition of conditions on a gathering.

Section 12(1)(c) criminalises the failure by conveners to appoint marshals, and to take steps to inform participants and marshals of conditions to which a gathering is subject.

Section 12(1)(d) criminalises the contravention of or failure to comply with the contents of a notice or the conditions to which a gathering is subject, if done knowingly.

And section 12(1)(h) criminalises the failure to comply with the notice requirements in respect of the postponement, delay or cancellation of a gathering.

The criminalisation of this conduct clearly limits the right to freedom of assembly. While the criminalisation serves the important purpose of avoiding disruptive protests, it does not appear that the limitation can be justified under section 36 of the Constitution (the limitations clause). This follows from the reasoning of the Constitutional Court in Mlungwana. Criminalisation cannot be justified if there are less restrictive way to avert disruptive protests, including the imposition of administrative fines or heightened civil liability for convenors.

There are, therefore, grave doubts about the constitutionality of various provisions in the Gatherings Act. The Bill must address this to align the Act with the Constitution.

The period for public comment on the Bill is still open. Comments may be emailed to Dr. PC Jacobs at comments.bill@csp.gov.za until Friday, 27 November 2020.

Next:  IPID investigating after police accused of assaulting woman