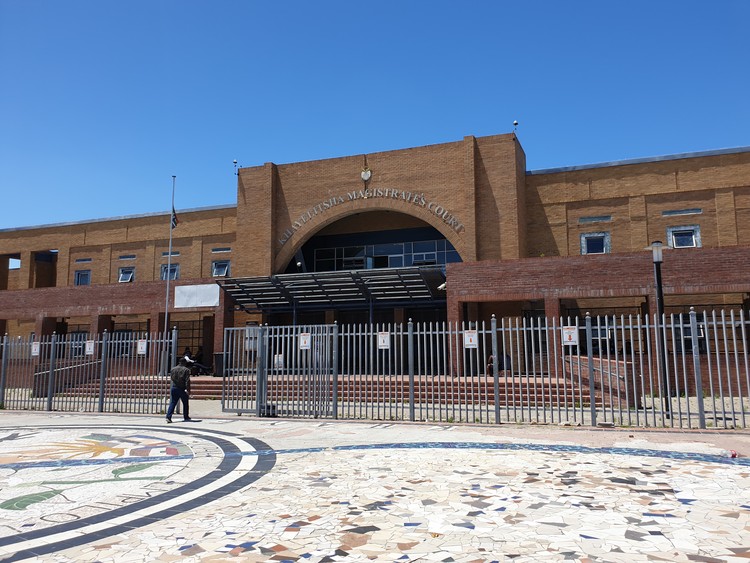 The trial of the man accused of killing Phelokazi Mqathanya was postponed on Wednesday because the court ran out of paper for photocopies. Photo: Mary-Anne Gontsana

The trial of the man accused of murdering Phelokazi Mqathanya has once again been postponed, this time because the Khayelitsha Magistrates Court ran out of printing paper. Mqathanya was lesbian and her family and LGBT+ activists believe her murder was a hate crime.

Accused Bongani Ngadleka made a brief appearance in the Khayelitsha Court on Wednesday for Mqathanya’s murder. He is accused of stabbing her to death on 2 May last year.

According to her sister, Phumeza Ndlwana, Mqathanya was at a house just behind her home in Site C, having drinks with friends when she was called outside and stabbed after an argument. She died at the scene.

“Prior to her death, in April my sister was harassed by four guys who live just down our street. They saw Phelokazi with a girl one day and started saying homophobic things to her. In that same week, they attacked her with a knife, telling her that she thought she was better than them and could easily get girls. She managed to fight them and ended up stabbing one of the guys on the hand with their own knife.”

“My sister was a happy soul who was just living her life the way she wanted and she got so much hate because of that,” said Ndlwana.

Ngadleka will be representing himself in the case. Appearing before the magistrate in the courtroom which was nearly empty but for members of Mqathanya’s family and friends, he was told that the case would be postponed because there was no paper in the whole court building to print out documents for him that he would need to represent himself.

The magistrate told Ngadleka that there was no paper to make him copies of the documents inside the docket.

To which a visibly irritated Ngadleka said, “I was told that the investigation is complete. What are these documents that you are referring to?”

He was told that the documents included information about the witnesses and what the case was about.

The case was postponed to 2 June.

Speaking to GroundUp outside court, Happiness Gutswa, a close friend of Mqathanya and member of LGBTIQ+ organisation Free Gender, said: “So this whole building doesn’t have paper? Phelokazi’s case has been postponed again, just because of paper? Couldn’t they have gone and bought paper while we were still waiting for Bongani to appear?”

Before Ngadleka’s appearance on Wednesday, the case was postponed four times last year before being withdrawn on 14 December because there was no docket, and then reinstated.

“When I got home yesterday after court I just felt sick. It seems like everytime we move forward, something happens to take us right back to where we started.

“The way things are going, it is very hard to keep up hope that we will get justice for my sister. There is nothing we can do anymore, so we wait for 2 June,” said Ndlwana.

Ndlwana said Mqathanya was loved by everyone. She was an aspiring chef who was set to go to the United Kingdom after winning a cocktail-making competition. Her trip was set for 4 May 2021, two days after she was killed.

Next:  Concourt to rule on access to books for blind people

Previous:  Two years into the Covid disaster, where do we stand?