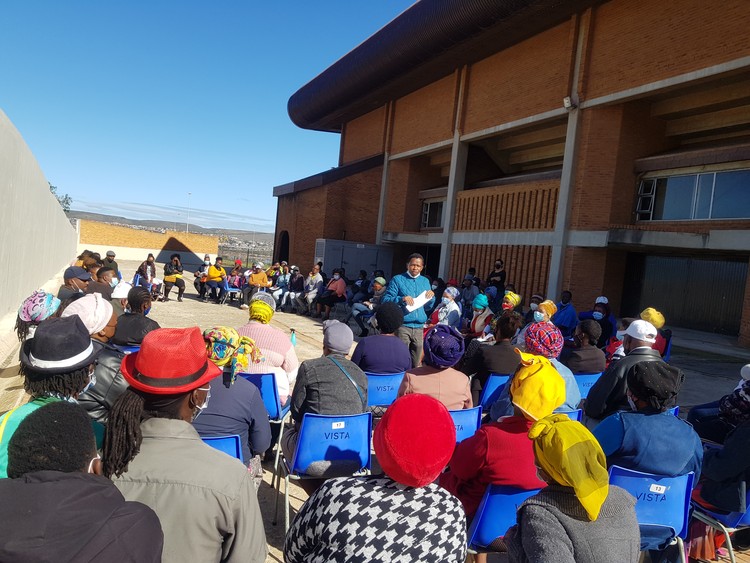 Members of the Nelson Mandela Bay Water Crisis Committee met with residents at the weekend to discuss the impending Day Zero in the metro. They agreed to lay a formal complaint with the Human Rights Commission but warned that they would shut down the city should the municipality continue to ignore them. Photo: Joseph Chirume

The Nelson Mandela Bay Water Crisis Committee are demanding that the SA Human Rights Commission (SAHRC) investigate allegations of corruption and mismanagement against the municipality. They also warned that they are prepared to shut down the metro should the municipality continue to ignore their demands.

In a recent statement, the municipality warned residents that should “the current demand for portable water continue at 280 million litres a day, 40% of the city will have no water by the end of June 2022”.

Municipal spokesperson Mthubanzi Mniki told GroundUp last week that the municipality was “in the process of” increasing water tankers, standalone pipes and water tanks to communities.

During a meeting attended by over 120 people at Nelson Mandela University’s Missionvale Campus at the weekend, committee members said they will be compiling the relevant documents to submit to the SAHRC this week. The committee blames the impending Day Zero on municipal officials for their failure to replace ageing water infrastructure or to fix frequent leakages.

The Water Crisis Committee issued a list of 15 demands to the municipality in a 9 May press release. These include: stopping all water bills; enforcement of indigent policy; advance communication of water cuts; compensation for people who have suffered from illnesses from contaminated water; proof that water is safe to drink; constructing a dam in Bersheba; closing all water leaks; providing every household with a Jojo tank; daily water supply trucks; an end to estimated water bills; and, water tanks in all schools.

Leon Jack is a Treatment Action Campaign member and a resident of Soweto on Sea. He said households go days without water. “We are finding out that clinics are being closed earlier or their gates locked because they don’t have water. We have experienced an increase in the number of people defaulting in taking their treatment. Why doesn’t our municipality drill more boreholes? They don’t even provide tankers,” said Jack.

Resident Funeka Vellem said people in Chris Hani, KwaNobuhle have not had consistent water supply for three months. “People are getting sick because there is no clean water to drink and wash their hands. Tankers come after a long time and they bring insufficient water. Most residents are poor and cannot afford to buy bottled water. People queue at a few houses that have water and their water bills are high,” she said.

Pensioner Patrick Yayi from Chris Hani told the group that his water bill was R13,000 because he has been allowing desperate neighbours to tap water from his home. “I have no choice but to let residents fetch water from my house. They would have vandalised my place had I refused. I hope the municipality will erase the amount because this water was not wasted,” said Yayi.

Thembakazi Lindile from Motherwell said the intermittent water supply is affecting learning at schools as children are sent home earlier than normal daily. “School children are behind with their studies because they are dismissed early when there is no water at school. This makes it difficult to plan for their progression into the next grades,” said Lindile.

Loyiso Mpondo, senior liaison officer at the SAHRC, told the committee in an email that, “Our office is investigating the issue of the quality of water in the NMBM. We met the mayor and other senior officials including the City Manager. We are waiting for their written response.”

Next:  Court rules on the limit of the Human Rights Commission’s powers

Previous:  It’s been 15 months since the Cape High Court reserved judgment in this “emergency” housing case