Mayor tells strikers there will be “consequences” 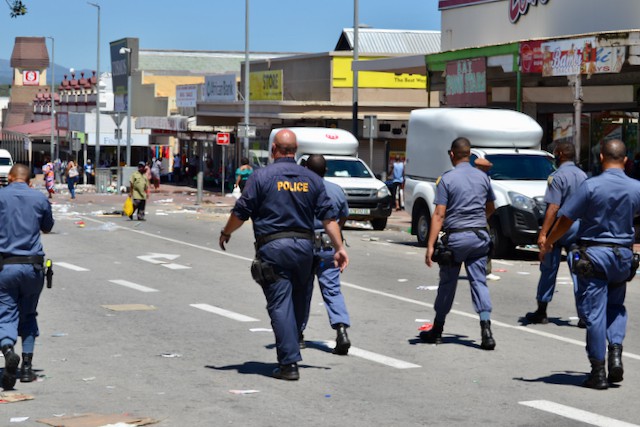 A group of policemen, escorted by a Nyala, cleared rubble left by striking workers in Uitenhage. Photo: Thamsanqa Mbovane

Melikhaya Kortjan, regional secretary of SAMWU, said, “There was no budget for PPE before the Covid-19 pandemic, therefore they can’t say there is no budget for our workers.”

About 100 workers gathered in the hot sun outside Uitenhage Town Hall blowing whistles while a police convoy moved down Market Street from Caledon Street. A group of policemen, escorted by a Nyala, cleared the rubble. One officer filmed the crowd and a man showed the officer the middle finger. The policeman responded: “You are not even wearing a mask.”

SAMWU, the biggest union in Nelson Mandela Bay Municipality claiming a membership of 4,000 workers, has ordered all its employees to down tools.

One worker told GroundUp she had been threatened that her home would be petrol-bombed if she went to work. “I am very scared,” she said.

Municipal buildings were closed, including customer services and the traffic department.

Talks with SAMWU leadership and the municipality were held on Tuesday but differences could not be resolved.

At a media briefing on Wednesday, Mayor Nqaba Bhanga said, “They [SAMWU] got the certificate to strike from the court and not the City. If they want to embark on a fully-fledged strike they must apply for it, because they are now breaking the law of the country.”

“A ‘no work no pay’ rule will apply. We cannot accept that essential workers are also taking part in this illegal protest. There will be consequences against all who are taking part in it.”

“SAMWU is picketing outside of the picketing rules, which require only 100 people to picket outside the City hall … Now they have blocked people and cars from accessing municipal buildings, threatened innocent people and damaged property.”

“We are building the City; they want to break it,” said the mayor.

“We have applied for a court interdict against them and there will be a disciplinary process against all who are involved,” he said.

Next:  Woman to pay damages for falsely accusing ex-husband of rape

Previous:  So who really is on the PRASA board?