Buffalo City denies it but has launched a probe

Residents of Macleantown near East London say wealthy outsiders are grabbing land from them, with the complicity of municipal officials. Photo: Johnnie Isaac

Residents of Macleantown near East London say municipal officials are involved in a “land grab” by wealthy people of property granted to them in a 1996 land claim. The municipality denies this but has launched a probe.

Macleantown is the semi-urban area in Buffalo City along the N6 Route and 40km outside East London. It has a commonage which residents use for livestock grazing.

The original residents, who were removed under the Group Areas Act, won a land claim in the 1990s. Now they say, newcomers who were not among the original claimants, are fencing off large plots and building houses.

Resident Twoboy Ngxota said he was only 13 when his family was removed in 1970. Like many others, he said, his family was relocated to areas which fell under the then Bantustan of Ciskei. His family went to a village called Tsholomnqa.

“Many families had livestock, we lost a lot of it during that process. We thought we could take our livestock with us to Tsholomnqa but we were told that we are only permitted to bring two cattle and we ended up losing about 40 cattle,” he said.

Claimants returned after their land claim was successful, and, said Ngxota, the families were given RDP houses and financial compensation of R23,000. But now, they say, their commonage and some unoccupied plots belonging to land claimants have been illegally occupied.

They say Buffalo City law enforcement is doing nothing to prevent this in spite of two court orders, the latest in August 2021 in the East London circuit division of the High Court. According to lawyers representing the Macleantown Residents’ Association, a first court order was granted in January 2017 by the Grahamstown High Court after the Buffalo City Metro went to court on behalf of Macleantown residents to obtain an eviction order against the people who had occupied the vacant land. The City did not implement the order, the lawyers said, and the families went to court again when more dwellings were erected. In August last year the court told the City to enforce the 2017 order.

Residents claim that officials and municipal councillors are involved and are among owners of illegally acquired plots.

They say they are paying rates to the municipality while the new illegal occupants are fleeing from affluent suburbs to dodge rates.

“This is not a land grab by the ordinary people,” says resident Luvo Silwana. “The people behind this one are more organised.” He says the new inhabitants put up shacks, then fence large plots around the shacks to install guards while they bring building materials and construct their houses.

Residents showed us video footage and photographs of trucks on their way to deliver fully-built shacks, building materials or fencing. In some of them, residents claim, government vehicle registration numbers can be clearly seen.

“We have seen shacks that had been built already being delivered in government-registered trucks, escorted by people driving top-of-the range vehicles,” said Silwana.

He said there was a committee responsible for the allocation of land. “We give the land to people who need it but that is done procedurally. We have a committee and there is a process that people who want to live at Macleantown follow,” he said. 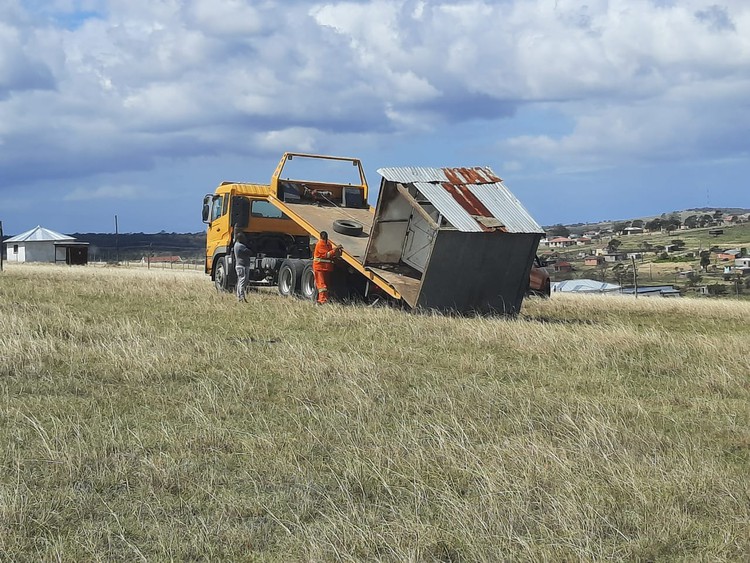 Residents say trucks with local government number plates have been delivering shacks and building material onto the land. Photo: supplied

Ngxota said some people have more than one plot and if they decide to sell, the transaction must be approved by the committee.

Another resident, Thuthani Kowapi, said they had held numerous meetings with Buffalo City officials without success.

But the City denied the involvement of its officials. Municipal Spokesperson Samkelo Ngwenya said: “Through our investigation we have found no involvement of our officials in this.”

“Our law enforcement agencies have been alerted to this and have been shown the footage. They are conducting their own investigation.”