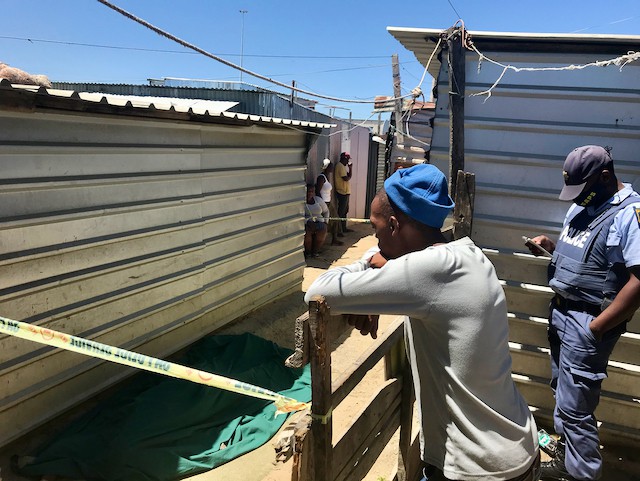 Police cordoned off the space between shacks where a Dunoon mother of five was electrocuted. An inquest docket has been opened for investigation. Photo: Peter Luhanga

Bongeka Mhlakaza, a mother of five children, was electrocuted outside her shack in the overcrowded Siyahlala informal settlement in Dunoon, Cape Town, on Thursday.

Mhlakaza was preparing for an early morning work shift at a retailer in Parklands. Her neighbour, Thandiswa Xayimpi, said Mhlakaza always made sure her children had a warm bath and were fed before she set off. She used an illegal electricity connection but her shack had no power that morning. She stepped out and saw a loose wire. She asked for help. A man told her to pass him the wire so he could reconnect her shack. When she touched it, she was killed instantly.

“We are not safe. We don’t have any choice even though we know it is not safe. Authorities know our problem. We have been pleading for electricity ever since,” she said.

Mayco Member for Human Settlement Malusi Booi repeated what the City of Cape Town has been saying for many years — that the settlement is on Transnet-owned land.

“It is also the subject of court processes which are under way,” said Booi.

“The number of occupants is ever increasing, meaning that we are working with a moving target,” he said.

Eskom spokesperson Kyle Cookson said, “In the Western Cape, Eskom recorded eight fatalities and two injuries for the year 2020 [due to illegal connections].”

“Electricity transmitted or distributed on power lines can be up to 765,000 volts.”

He said certain areas in Dunoon are a hotspot for illegal connections and the long-term solution is to electrify informal settlements.

“Currently this is not possible as the area is situated on privately owned land … There are ongoing discussions with Eskom and its stakeholders, including the City of Cape Town, to eliminate illegal connections and find sustainable solutions,” said Cookson.

Milnerton SAPS spokesperson Bongeka Mdaka confirmed that an inquest docket had been opened and the matter is under investigation.

Next:  Without money to rebuild their shacks, Khayelitsha fire victims are living in churches