“Most of the time, we only had school once a week” 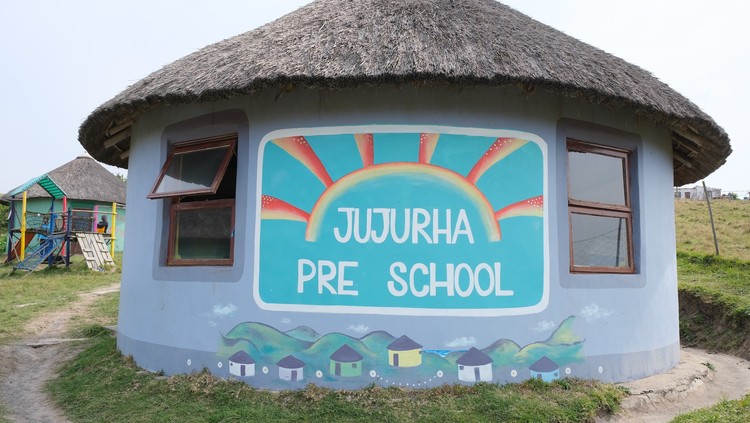 Lihle Mbikwana grew up in Xhora Mouth in the rural Eastern Cape. As a child, his walk to school was more than an hour long, which in that area is considered short. The teachers had to drive three hours on a gravel road from Mthatha. They rarely showed up.

“Most of the time, we only had school once a week,” says Mbikwana. “We would just go to school to eat, and come back.”

He scraped through primary school. At age 15, his parents sent him to the Free State to go to high school. They didn’t want him to follow the path of most of the young men in the area, dropping out of school and going to work as fruit pickers in the Western Cape.

When he got to high school, he couldn’t read or write.

“I was thinking of myself as the stupid student in the class. It was very bad,” he says. He was about to drop out, but fortunately, his English and Xhosa teachers saw his potential and encouraged him to keep going. He passed matric.

Mbikwana is now the programme manager for the Vibrant Village programme run by Bulungula Incubator (BI), a nonprofit started in 2006 with several developmental programmes in four villages in the Xhora Mouth administrative area.

Mbikwana says his experience of school has made him passionate about developing the education system in his community. If he was a child today, he would have been able to attend one of five Early Childhood Development centres started by Bulungula Incubator, with quality teaching from trained practitioners, and two nutritious meals a day.

In primary school, he would now have access to educational support services. After finishing grade 9, he would be able to enrol at Bulungula College, an independent high school, which graduated its first cohort of matric students in 2021. 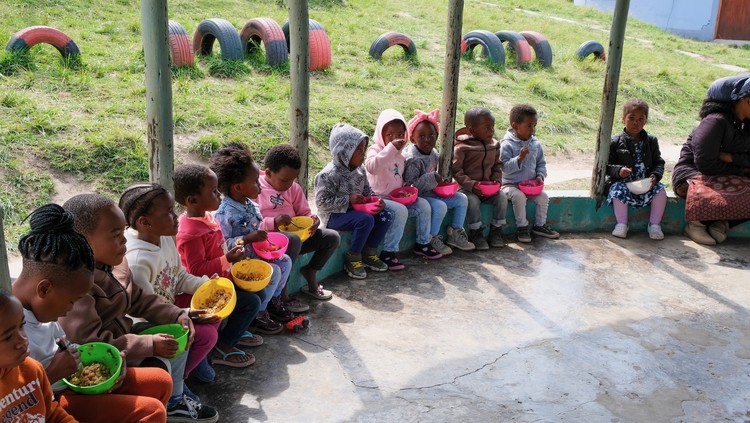 The Xhora Mouth administrative area is home to about 5,000 people. Historically part of the Transkei, a “black homeland” under apartheid, the area is scattered with traditional Xhosa villages. Most of Xhora Mouth is without grid electricity or running water.

In Mbashe Local Municipality, under which Xhora Mouth falls, 96% of households have a monthly income under R1,600. Only 13% of people have matric.

In 2002, when the founders of the Bulungula Incubator first came to the village, the local primary school was a mud hut, falling apart, with teachers only showing up five days a month.

Turning on the light

“We decided to demonstrate excellent education,” says Rejane Woodroffe, co-founder and director of Bulungula Incubator. The Jujurha Pre-School was opened in 2009, run by a committee of parents from the community. Parents volunteered to cook and make toys, while trained practitioners were employed to offer a proper Early Childhood Development (ECD) curriculum.

Over the next two years, parents witnessed the impact of quality ECD education. Woodroffe remembers how one mother said the school had “turned the light on in my child’s eyes”. Many parents in the village could neither read nor write.

At the behest of community members and the local chief, Bulungula Incubator has helped start four additional ECD centres, all run by parents in rondavels donated by the community with teaching done by qualified ECD practitioners. The children receive two nutritious meals a day and a range of primary healthcare services.

A total of 140 children are currently enrolled in the ECD centres and 820 children have graduated since 2009.

In Xhora Mouth, the Bulungula Incubator has developed a successful pilot project, with a clear model for how parent-run community-based ECD centres can be established in other parts of the country. They have compiled an ECD Programme Toolkit based on their experience, to help other communities, NGOs, and government entities start similar centres. 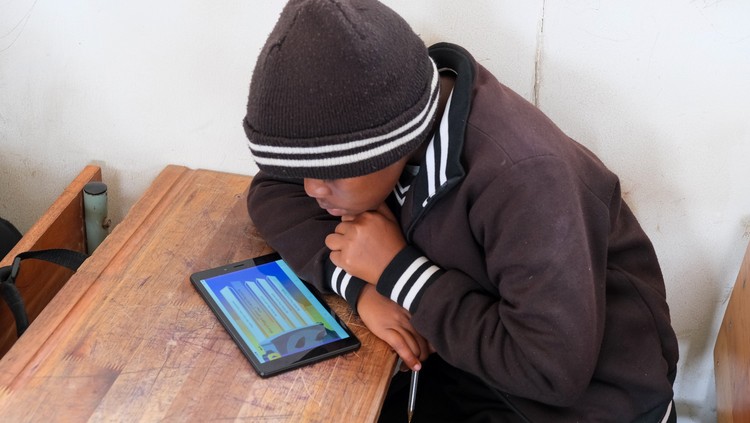 By the time children finish grade R at the ECD centres, they are fully prepared for primary school and have already started reading and writing. However, the four government schools in the area are still under-resourced and are rarely open on Fridays.

To improve the level of primary school education in the area, Bulungula Incubator decided to partner with the education department and offer support services through the iiTablet Tshomiz e-learning programme.

Mbikwana showed GroundUp Melibuwa primary school where about thirty learners, each with a tablet, were busy with self-paced, multimedia, interactive courses.

These courses supplement the maths and language curriculum. Across the four sites where the programme operates, 23 trained facilitators are employed to coordinate the programme and assist learners. Learners have their own profiles and log-in details, making it easy to track their progress and provide feedback to teachers.

Masende Ngqola, site manager for the iiTablet Tshomiz programme, said, “We are here to bridge the gap between the educators and the learners … As facilitators, we want the learners to know we are not educators. We are the tshomiz [buddies], here to help and to make learning fun.”

A total of 1,350 learners from Grade 1-12 participate in the programme with more than 220 tablets in use. Each learner receives two hours of extra learning per week through this programme. 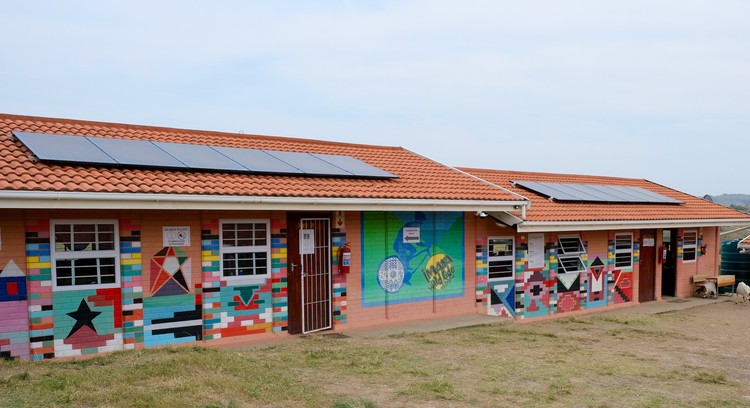 Bulungula College, started in 2019, is the only school in Xhora Mouth offering grades 10-12. Photo: Daniel Steyn

Bulungula Incubator data from the last 15 years shows that an average of six people from the community matriculate each year, and 95% of learners from the area do not pass grade 12.

Among the reasons for this, poor quality primary schools leave learners ill-equipped for high school. The long shadow of the apartheid-era Bantu education system also plays a negative role. There are four primary schools in the area catering for grades 1-7, one “junior secondary school” for grades 8 and 9, and the closest “senior secondary school” that offers matric is so far away, it requires learners to rent accommodation, usually a reed mat on a floor in someone’s house.

Getting away from home is an attractive prospect for youngsters who can afford it, but the environment they find themselves in when they do leave is not conducive to learning.

“Because in most families no one has matric, the value of education is not yet fully understood,” says Lindiwe Tukane, the Bulungula Incubator’s education programme manager.

Apart from social grants, the main source of income for people has been mining on the platinum belt and more recently fruit picking in the Western Cape. Matric is not a prerequisite for such jobs.

Bulungula College has two primary objectives: enabling young people to pass matric, and equipping them with the necessary skills and motivation to excel at skilled jobs or start their own businesses.

It offers grade 10-12 learners quality education, with about 150 learners enrolled this year. Last year, its first cohort of matrics finished high school. Thirty learners from the 2021 class have received matric certificates, 24 more than the historical average for the community. Only one of the parents of the matriculants had completed high school, and the majority of the parents had not completed primary school.

The college is a donor-funded, no-fee school operating on a budget of R2.7-million a year – a cost of about R19,000 per learner, equivalent to the government’s cost of running public schools. It does not yet receive the learner subsidy provided by government to eligible independent schools.

The admissions criteria for Bulungula College are not based on academic merit and anyone from the Xhora Mouth may enrol. Half the learners in the 2021 matric class were 20 years or older and had failed several years at high school.

Unfortunately, the gaps in education were too large for some, and 32% did not pass. The Bulungula College has since helped two additional learners from the 2021 class matriculate through a Second Chance Matric Programme. 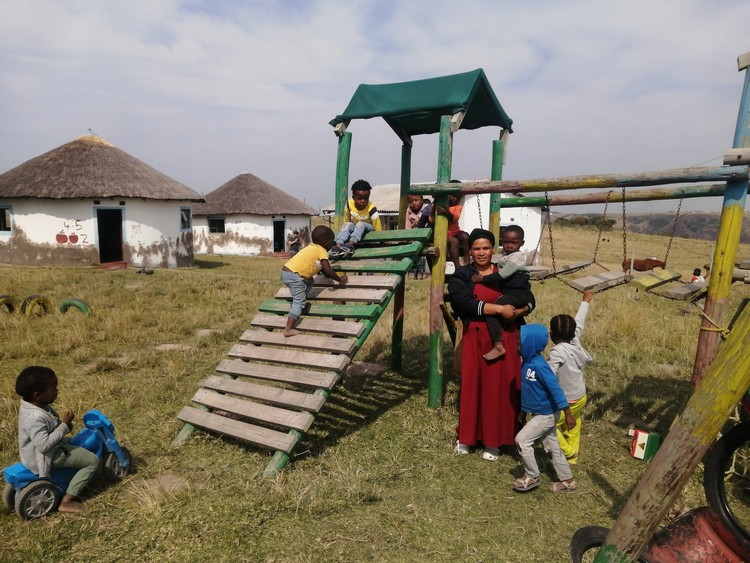 The question for many young people, whether they pass matric or not, is what will they do when they leave school.

The mining industry is no longer a sure route to employment. Picking apples in the Western Cape is seen as a quicker way to earn a living, instead of doing matric in the hope of finding a better job.

The Bulungula Incubator Job Skills and Entrepreneurship Programme (JSEP) caters to young people unable to pass matric because of the gaps in their education and those who have recently passed matric but have not been able to enrol at a tertiary institution yet.

Through remote teaching, accredited courses in a variety of subjects are offered, including agriculture, artisanal skills, and entrepreneurial and business skills. A driving school offers lessons and helps learners get licences.

JSEP participants then complete internships, funded by the Yes4Youth program, with businesses in the area or at Bulungula Incubator projects.

Siyamthanda Dibanto started at Jujuhra preschool in 2009. In 2021, she became the first person in her family to pass matric. Today, she is part of JSEP and is doing her internship with the iiTablet Tshomiz programme.

Her dream is to study law, she says. “Because of the history of our village, many of the old people who worked hard in the mines are struggling to receive their pension money. I want to fight for the workers,” she says.