News of M.I.A. coming to South Africa came with a flurry of anticipation and excitement. The rap megastar is a legend amongst the political hip hop scene. And the fact that her fame has not swayed her activism makes her an admirable figure. But why was she performing at the Old Biscuit Mill? As a political musician and activist, was she not aware of the area’s evictions and gentrification?

Mathangi “Maya” Arulpragasam was born in London to Sri Lankan Tamil parents. They moved back to Sri Lanka when she was six months old, then to India to escape the Sri Lankan civil war when she was nine years old, and then back to London when she was 11. She is a Tamil, a minority group that has been oppressed in Sri Lanka especially during the civil war that ended in 2009. and she has been an outspoken supporter for Tamil rights. She is renowned for her controversial lyrics and occasionally graphic videos. “Born Free” was temporarily banned from Youtube. She has also been accused of supporting terrorism by the Sri Lankan government.

Arulpragasam, who uses the stage name M.I.A. is a refugee herself. The musician and film-maker believes that there needs to be no separation between her music and activism. She uses her stardom to draw attention to genocide, refugees and human rights abuses faced by Tamils. 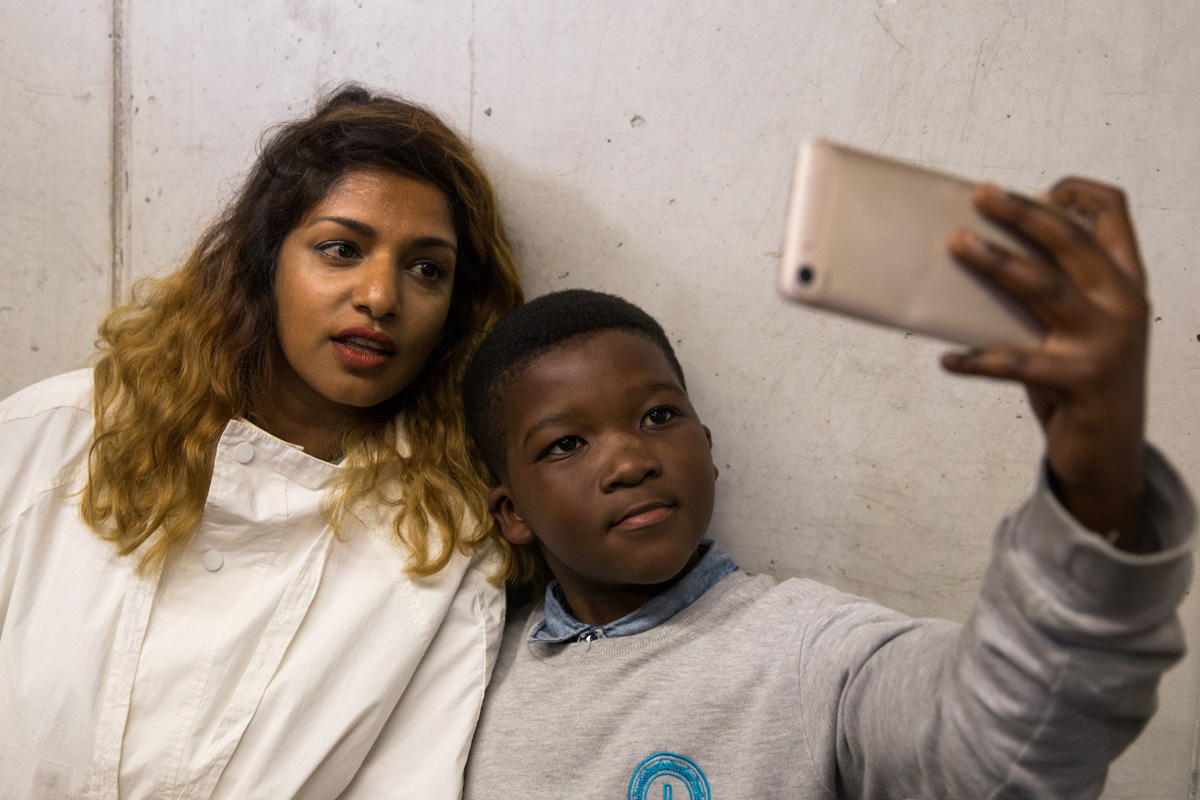 M.I.A. let’s a young fan take a selfie with her.

M.I.A. has been in a constant struggle between her western life since she was a teenager, and holding on to her Tamil identity. “As an artist, you’re put under pressure very quickly to gentrify yourself to enter the mainstream music culture,” she said during a press conference in Woodstock on Wednesday.

Yet M.I.A’s opening show was at the Biscuit Mill, a venue symbolic of the evictions and gentrification facing Woodstock and Salt River. It is the site of a fancy food market, as well as one of the city’s top restaurants. In August 2016, residents of Woodstock protested there against their evictions. Some of these residents are facing the prospect of being sent to Wolwerivier, an isolated temporary relocation area about 25km north of the city centre.

“Why are you performing at the Biscuit Mill?” asked a woman abruptly during a Q&A session after the screening of her biopic Matangi/Maya/M.I.A. at the Bertha movie house in Khayelitsha.

M.I.A. said that she was unaware of the issues before being booked there. But now, instead of avoiding controversy or trying to change the venue, the artist wants people to use her show as part of the conversation. “I really didn’t know too much about the politics of [the] Biscuit Mill and if you want to make some point heard, then you need to come to my show and we’ll make it a thing. We’ll stop the show, and we’ll address it and then you have to get them to bend to what your needs are”, she said.

On the day of the concert, MIA tweeted that she would give free entry to residents affected by the Old Biscuit Mill. 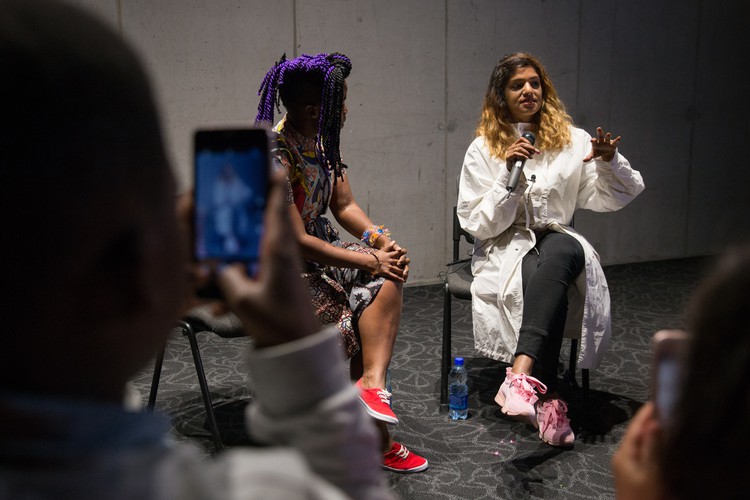 M.I.A. did a Q&A with Zolani Mahola, the lead singer of Freshlyground at the Bertha Movie House in Khayelitsha. The Q&A was held after a screening of M.I.A’s biopic MATANGI/MAYA/M.I.A, which was shown as part of the Encounters South African International Documentary Festival.

As the crowd swelled after 8pm on Thursday night at the Biscuit Mill, I noticed the audience was a little different compared to its usual hipster and tourist crowd.

For once, the predominantly “white space” was inclusive, an uncommon site in Cape Town. Besides the crew working on the stage, the opening acts, K-$ and Angel-ho, as well as M.I.A’s dance crew were people of colour. The crowd, although mostly white, contained large swaths of brown and black people. A small boisterous crowd of LGBT people were also present.

Angel-ho’s performance was particularly idiosyncratic. Visually, it was a presentation of all things non-hegemonic, non-binary, noisy, electronic and somewhat chaotic. The performance was raw and unapologetic. “I don’t know what to think about them”, said one befuddled and conflicted person, whose expression was shared by many in the audience, who looked on holding awkward smiles. This awkwardness was probably due to the music, but also because of Angel-ho’s ambiguous sexuality and gender. 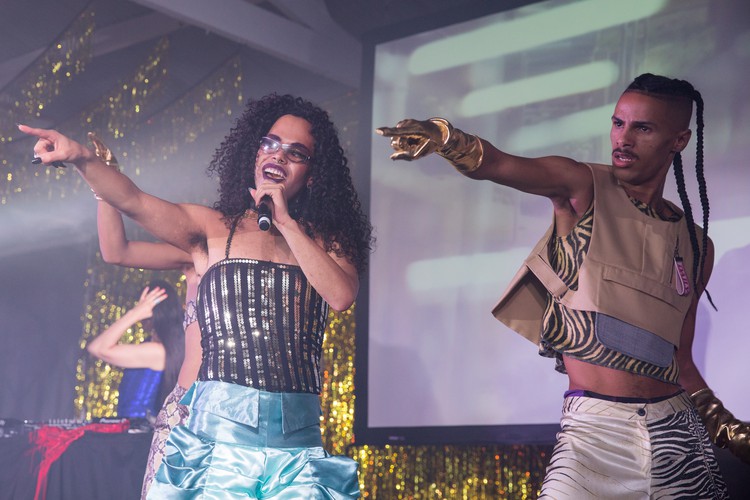 Angel-ho was one of the supporting acts.

M.I.A’s performance was riveting. She demanded your full attention with each movement and word she spat. Crowds of people sang along, word for word, and reached for her hand as she moved vivaciously from one end of the stage to the next.

It was a slight disappointment that the issue of gentrification wasn’t addressed at the event, but was that really her responsibility? The onus was put on us when she said, “You need to come to my show and we’ll make it a thing.” But she created a space inside an area where people of colour usually feel alien and uninvited. And that, accompanied by the joy of her incredible performance, was a relief. 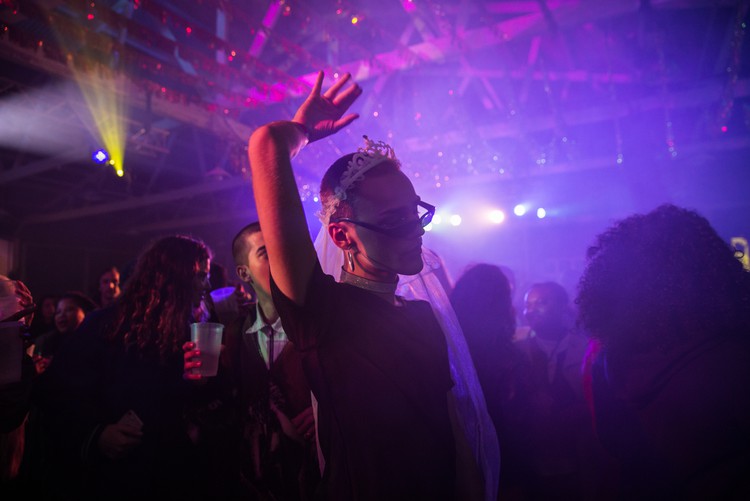 An M.I.A fan dances during the concert. 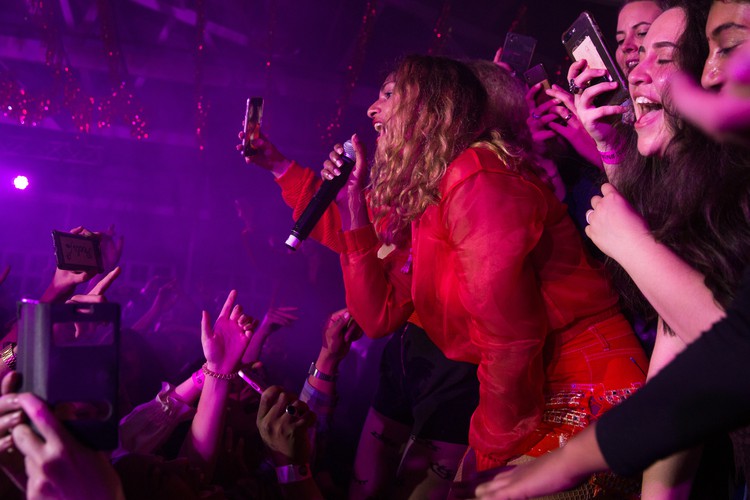 One of the highlights of the show was M.I.A calling women on to the stage for the song “Bad Girls”. It eventually become somewhat chaotic as more and more people filled the stage and refused to get down. Security was called in to assist in ushering people off the stage. 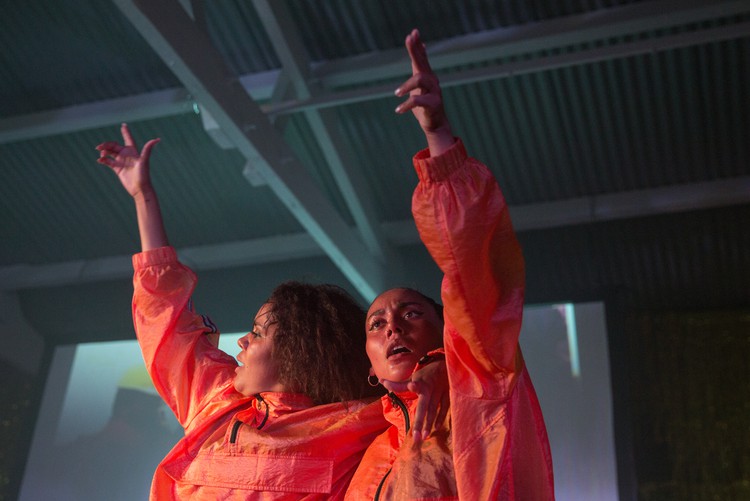 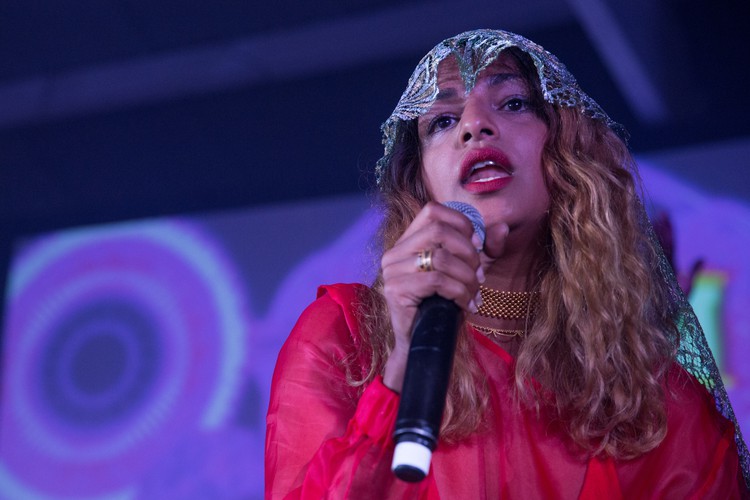 M.I.A. stands for “Missing in Action”. The name was chosen when she went searching for her cousin who went missing in Sri Lanka.

Additional reportage was added to this article after publication.

Next:  Department of Labour to use billion-rand surplus to extend UIF benefits