Education department says enrolments in Western Cape have increased by more than 18,000

Angry learners smashed school windows with stones, damaged teachers’ cars and demanded that learners leave classrooms at a primary school in Mfuleni on Friday. Several schools in the Cape Town township were shut down on Friday morning by protests like this. The South African National Civic Organisation and unplaced learners and their parents appeared to be involved in the protests.

“They didn’t care who or what they hit with the stones,” said Zandile Goloza, a schoolteacher at Bardale Primary. “We ran to the classrooms and shut the doors because we were frightened and shocked. We came out after about two hours when they left.”

“They stood outside the gate and called out learners who were in the classrooms to leave school and join them,” she said. “Grade R learners were frightened … and cried for their mothers.”

Goloza said the protesting learners threatened teachers. “They told one teacher that they know where he stays and they would get him,” she said.

The protests are in response to overcrowding in Cape Town’s schools this year.

Community volunteers have been looking after learners who could not find places in Mfuleni schools. Instead of being in school, the children are in an unused community clinic, Mfuleni Community Hall and a local church. Angry parents complain that their children are just sitting around and no teaching is happening.

At a large meeting on Thursday, the community expressed its frustration to Western Cape Education Department officials.

“There will be a catch-up program. No learner will be disadvantaged because of the five weeks that have been lost,” the official responsible, David Millar, Director of Metro North Education District, told parents.

He said that he had asked two schools — Nyameko Primary School and Nalikamva High School — to allow the department to implement a platoon system. This means the children now at the clinic would go to the schools in the afternoon, after the end of the school day for the children enrolled in the school. But the schools had not yet agreed to Millar’s request.

There were howls of protest when Millar announced that a prefab primary school would start to operate in April. He also said a prefab high school would be put up in Mfuleni in October.

“You must go and see how our kids spend their time at the clinic. They stand for the whole [time] and do nothing,” said Nonyaniso Mvango.

She said her kids are impatient to study. “Because our kids are fed up with lounging around at the clinic, we have to force them to go there in the mornings. We need a school now.” 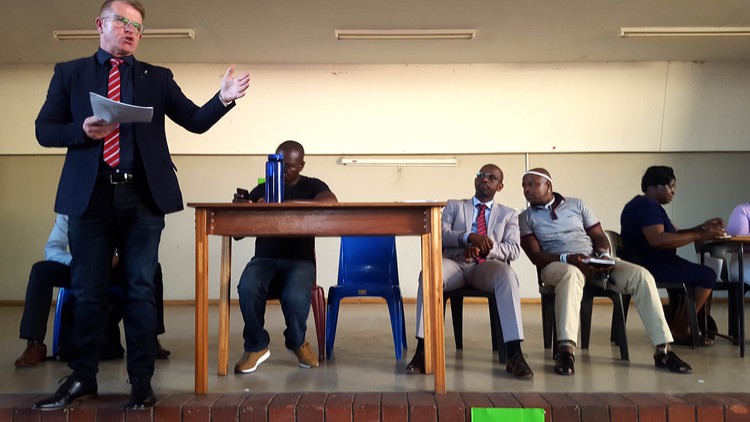 Xolisile Qwesha, a member of a community committee set up to sort out the shortage of schools, told GroundUp at a meeting at Nyameko Primary School on Friday, “Learners will stay out of school until the department brings us a prefab high school and a prefab primary school … We are trying to intensify our attempts to force the department of education to give us schools”.

Qwesha said community leaders were angry because the department officials had refused to meet them in Mfuleni at 10am on Friday but told them to go to their offices in Parow. “We don’t have money to go there. They must come here themselves because they have resources,” said Qwesha.

Community leader Oyisa Sono claimed that he and other leaders asked “principals nicely to release learners” on Friday. He said: “We are protesting peacefully. There are no beatings, burning of tyres and looting.”

But police confronted Sono about forcing learners out of schools. “You tell kids to leave school, but no one is escorting them home,” a policeman said. 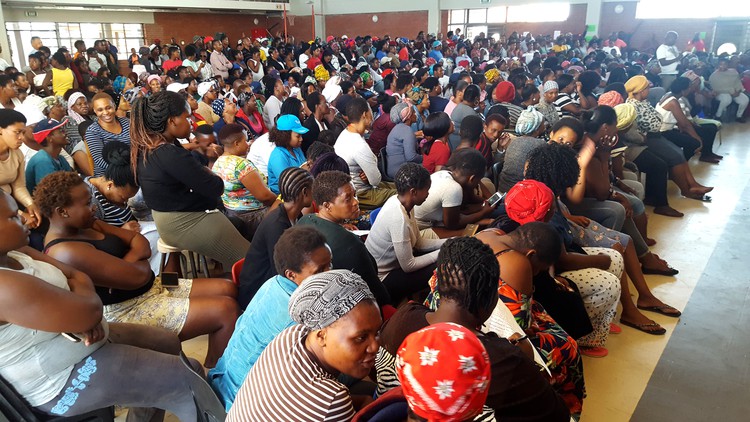 Thursday’s meeting was attended by many frustrated parents.

Debbie Schäfer, Western Cape MEC for Education, said in a statement on Friday that the protest action in Mfuleni preventing access to schools “will not be tolerated”. She said the department had been negotiating with the Mfuleni Education Forum and the Mfuleni Development Forum.

“There however seem to be different groupings within the community who are abusing and manipulating the situation for their own purposes. It also appears that there are various interests at play and not all want the same outcome. This makes the situation incredibly difficult to manage. Our officials have now also come under threat. This is totally unacceptable,” said Schäfer.

She said it is alleged that “some community members, reportedly those who are seeking placement for their children, have now disrupted teaching and learning at all Mfuleni schools indicating that no learner in Mfuleni will attend school until every child can be accommodated … Many of these learners seeking placement are new and late applications.”

Schäfer said the department had agreed with the Mfuleni Development Forum to platoon high school children temporarily until a new mobile school was started. The department has also almost completed a 16-classroom school in Silver Sands which would solve Mfuleni’s overflow of high school students, but people were refusing to send their children there. The project had been delayed a number of times due to community protests.

“We have tried the diplomatic approach with the Mfuleni fora in the best interest of the learners, and we shall now lay criminal charges against the perpetrators and take whatever other legal action we can to ensure that we get these learners into school. Some community leaders are very unhappy with this behaviour,” said Schäfer.

Schäfer said that of the 5,700 currently unplaced learners in the province, 5,510 applied after last year’s application period had closed.

She said enrolment in the province increased by over 18,000 last year. Over 16,000 of these learners are from outside the Western Cape. To place everyone the province needs 15 new schools and another 480 teachers.

Although the province is building several new schools in 2019, “it is simply not enough to keep up with the demand for places” said the MEC. She also said the budget allocation to the province from Treasury was not enough to cover wage increases. “Last year’s drought caused us to divert R300 million from our infrastructure budget to plan for continuation of schools in the event of Day Zero,” said Schäfer.

Next:  Sex workers campaign for law to be changed

I think the Department of Education failed to fulfill its promises regarding the building of new schools in Mfuleni. In 2018 there wan an influx of student in Manzomthombo and Bardale high and in some other primary schools. Parents were told that in 2019 there will be two new schools high schools and a primary school because they saw an increase in the number of learners.

Parents at Mfuleni were also told that there will be schools that will open in 2019 and they had hope. The Department of Education has failed parents and learners. Now we will find learners who do not actually know the reason of going to school because they wake up and spend the whole day making noise. These learners are deprived of education. The saddest part is that there were learners registered early in some of the primary schools for Grade 1 but they didn't get placements. They are now at Itsitsa Primary School making noise and some of them have forgotten how to write their names. I'm pleading with the department to do something so that these learners can find something and learn.