About 1,800 people were left homeless in the second fire to rip through the township in less than a month 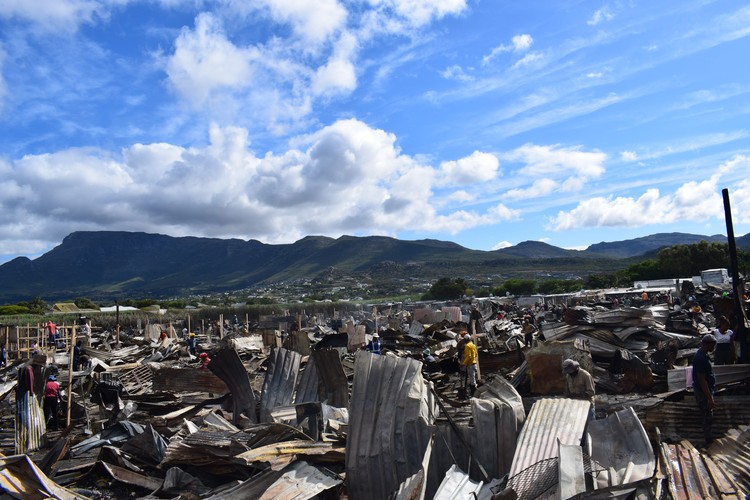 Some of the nearly 2,000 people whose homes were destroyed in a fire on Monday in Masiphumelele have started clearing and trying to rebuild. Photos: Lucas Nowicki

“We were home when the fire started. We didn’t think it would reach us but it travelled so fast. It was traumatic,” says 33-year-old Zikhona Mkuba. She is among about 1,800 people whose belongings were destroyed in a massive fire that ripped through about 600 shacks in Z-section of Masiphumelele in Cape Town on Monday.

This was also the second fire in less than a month in the township. On 31 October, a fire destroyed 309 shacks and left more than 600 people homeless.

On Tuesday, GroundUp visited the area where some people were clearing their plots to rebuild their homes. But many people are still unable to buy material and other essentials.

Mkuba, who is unemployed besides occasionally volunteering at the local clinic, shared her shack with five other family members. They lost all their belongings, including their IDs. 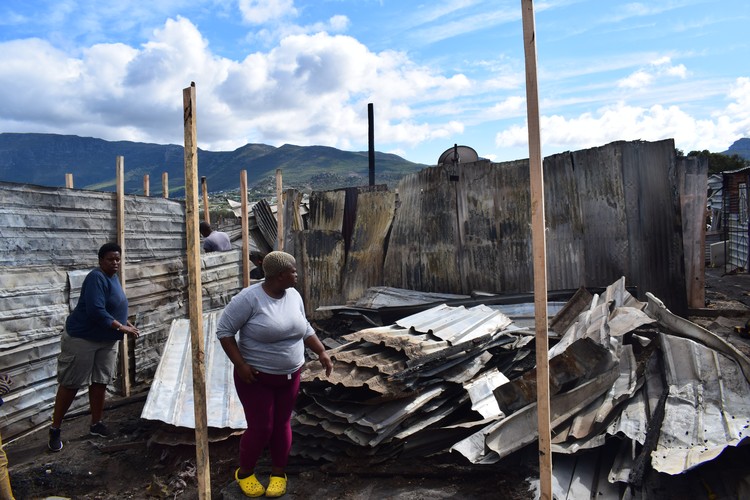 Zikhona Mkuba (centre) and a relative clear some of the charred zinc sheets that they could salvage from Monday’s fire.

On Monday night, organisations such as the Gift of the Givers and Living Hope provided families with food, blankets and other relief. Hundreds of families had to spend the night in the community hall. Most residents say they woke up at sunrise on Tuesday to start salvaging what remains of their homes and start rebuilding what they could.

Another resident, Mfundo Duma, 34, says he lost his home and belongings in the fire. Duma, who is unemployed, was out looking for work when the fire started. “I lost everything,” said Duma while trying to rebuild his shelter on Tuesday morning.

Duma lives with his two children and sister and does not receive any government assistance like grants.

Jermaine Carelse, spokesperson for the City of Cape Town’s Fire and Rescue Service, said people first noticed the fire at about 9:40am on Monday. “When crews responded, they found several informal structures alight. SAPS and Law Enforcement had to be called in when members of the community tried to interfere with the firefighters’ work. When the fire spread to the wetlands area, additional resources were requested, and 70 firefighters with 15 firefighting appliances battled to extinguish the blaze in the wetland area of Masiphumelele.” 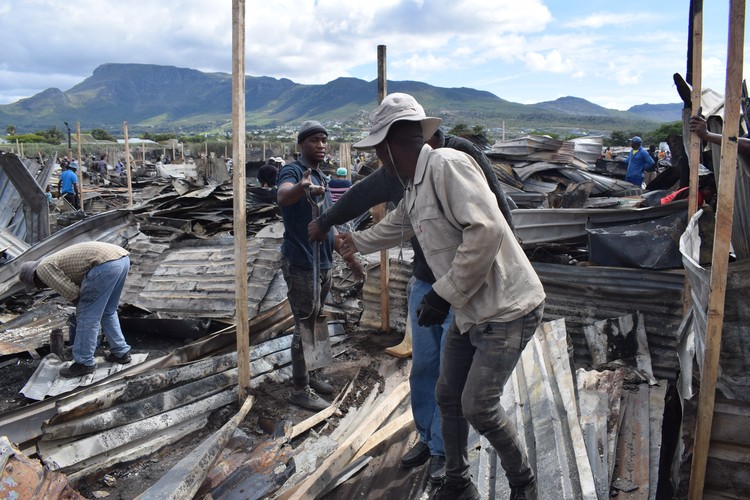 Mankayi Masixole, 31, helps other people sort through the burnt remains of their homes. He says he was sleeping on Monday morning when the fire started. He just had time to save some clothes and his sound system. Masixole is unemployed and lives with his three children and wife. The household survives on child support grants.

Carelse said at least two firefighters who sustained minor injuries were taken to hospital for treatment and released.

Western Cape Police spokesman, Frederick Van Wyk, said that claims of looting in the area at the time of the fire were “not true”. He said confusion erupted when some residents were trying to move their vehicles from the fire area before engines could make their way in.

“This caused a bit of unhappiness amongst the public and fire and rescue teams but was resolved. The cause of the fire is still unknown,” said Van Wyk.

The City’s Disaster Risk Management spokesperson Sonica Lategan estimated that 600 structures and 1,800 individuals were affected by the fire. Lategan said that SASSA is expected to provide more humanitarian relief.

Next:  Public sector workers call on government to return to negotiating table