Makhubele defends herself at Zondo Commission

Judge sees no conflict with her appointment while chairing PRASA board 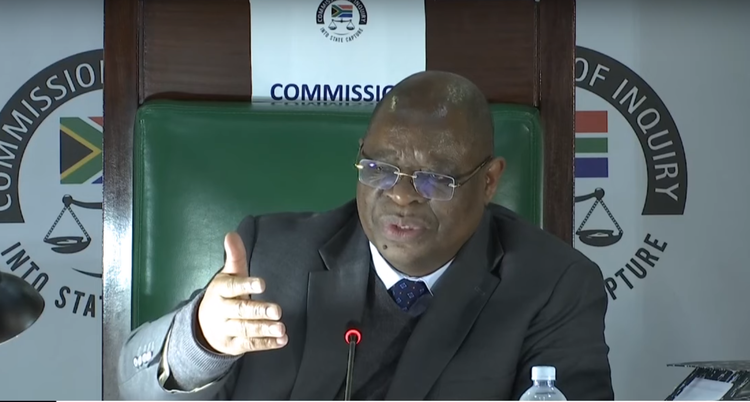 A screenshot of Deputy Chief Justice Raymond Zondo questioning Judge Tintswalo Makhubele at the Commission of Inquiry into Allegations of State Capture on Wednesday evening.

Judge Tintswalo Makhubele says she saw no conflict with her appointment as a judge while serving as chair of the former PRASA interim board.

Makhubele was giving oral testimony before the Judicial Commission of Inquiry into Allegations of State Capture on Wednesday evening. Makhubele’s evidence falls under the investigations into corruption allegations at PRASA. Her appearance follows affidavits submitted by PRASA’s Martha Ngoye and Fani Dingiswayo, #UniteBehind’s Zackie Achmat, and advocates Francois Botes and Diale Mogashoa.

“I did not see any conflict,” said Makhubele. She said she did not deem it a job which could be called “a huge responsibility,” She was responding to questioning by Deputy Chief Justice Raymond Zondo, who expressed his surprise at an assertion by Makhubele that chairing a state-owned enterprise was not a huge responsibility. Makhubele denied saying this, saying he had misunderstood her.

Zondo was leading evidence instead of Advocate Vas Soni, after Makhubele launched an application on Monday to have Soni recused as evidence leader.

Zondo asked Makhubele to explain the circumstances surrounding her appointment as chair. “Part of what makes your case strange at least to me, is that here is somebody who wants to be a judge. She has gone to an interview with the Judicial Service Commission (JSC) while knowing that she has been recommended for appointment as a judge. She knows about her recommendation in early October [2017].

Zondo told Makhubele that it was unusual for her to accept a role as chair of a state owned enterprise at a time when her status as a judge was all but confirmed, at a time when others would be winding down their affairs.

Makhubele insisted that there was nothing strange in her behaviour. She said that she had requested a deferment to start as a judge anyway, as she had to wrap up cases for the Water Tribunal, of which she was chair, and that she would have time.

Makhubele resigned from the Bar at the end of November 2017, and, according to a letter from the Water Tribunal cited by Zondo, adjudicated no cases for the body in 2018.

After a brief adjournment, Zondo asked Makhubele about the claim that Diale Mogashoa, external attorney for PRASA, had been instructed by Makhubele not to speak to PRASA’s internal legal team regarding the Siyaya Rail Solutions matter, in Makhubele was accused of pushing through a settlement agreement with controversial companies without involving the legal team. Mogashoa submitted a sworn statement that this was the case. Makhubele denied this.

Zondo asked Makhubele about the terms of the settlement in the Siyaya matter after remarking that this “was not a usual settlement” because she had instructed that PRASA pay the amount claimed plus interest with no evidence of negotiations. Makhubele said she would not comment “at this stage”.

Zondo pointed out that during a large proportion of the time Makhubele was chair at PRASA, there was no representative from the Treasury present which ultimately rendered the board inquorate, and possibly illegal. Makhubele did not answer, instead saying that the matter is before the courts.

Makhubele told Zondo that she would be bringing evidence of wrongdoing by Martha Ngoye and former chair of PRASA’s board Popo Molefe at her next appearance.

Makhubele is expected back at the Commission on 17 August.

Next:  Lockdown in pictures - Day 133: Recycling

Previous:  Call for freeze on land sales in Khayelitsha