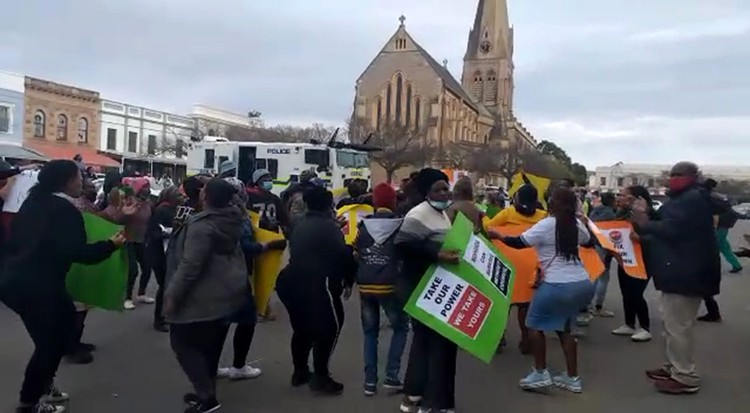 About 300 Makhanda residents marched to the city centre on Tuesday demanding that the MEC for Cooperative Governance and Traditional Affairs Xolile Nqatha come to meet them, 14 days after he had promised to report back on their complaints.

From 24 May to 26 May, residents shut the town down, protesting about potholed roads, unreliable water supplies, illegal dumping, and sewage spills and demanding the electrification of informal settlements. The protests were suspended after Nqatha arrived in Makhanda and addressed the residents, promising to return after 14 days.

Komisa said the agreement was that the residents would be addressed on the outcome of the meeting by their representatives.

But many residents had expected the MEC to speak to them. James Ntwana from Fingo Village said their leaders who were part of the meeting informed community members that the MEC had refused to talk to residents.

Another resident, Ntembheko Dyubhele from Joza location said Nqatha had promised to address a meeting at a sports centre in the township “and now he is said to be at the Settlers Monument which is outside of the town and far from the community concerned”.

Unemployed Peoples Movement leader Ayanda Kota posted on Facebook that leaders had met the MEC, who had not wanted to talk to residents.

“Comrades today we met the MEC and we informed him that residents want to talk to him. He responded by saying we are leaders and he will talk to us not residents.”

The three day protests in May brought the town to a halt, as groups of residents drove around Makhanda town in minibus taxis, forcing businesses and schools to close.

Previous:  The life and death of an immigrant dog whisperer