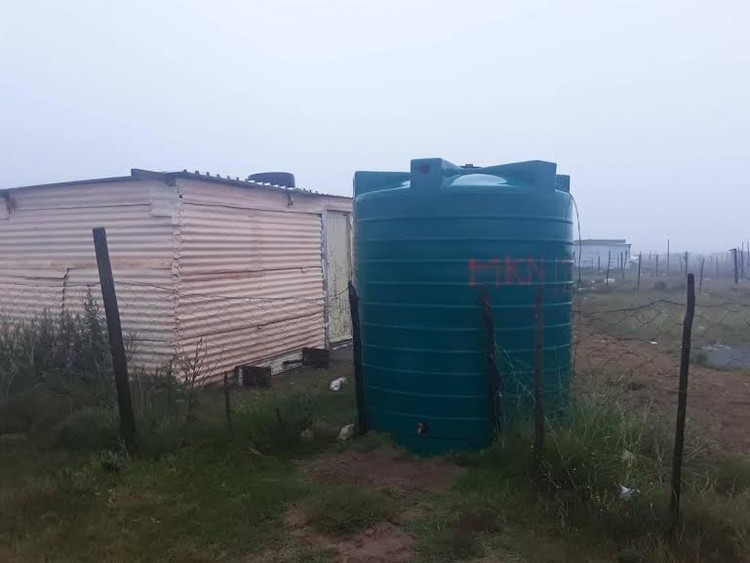 The water tank in Enkanini informal settlement has run dry and residents have to buy water. Photo: Loyiso Dyongman

As the water crisis in Makana Municipality in the Eastern Cape worsens, families are resorting to buying water from people with donkey carts, “renting” capacity in other people’s rain water tanks - and doing without when they can’t afford to pay. And the municipality will not answer questions.

Some Makana communities have suffered water cuts and lack of water for more than a year. Now others are facing the same problem. In Hoogenoeg, a water tank donated to the community by Gift of the Givers has been empty for seven weeks. Resident Melikhaya Matwa said residents were now buying water from donkey cart owners who are able to fetch water from far away, at prices of between R20 and R25 a litre.

“Our municipal officials have failed to replace ageing water infrastructure and don’t fix frequent leakages. The water crisis in the municipality disproportionately affects us as poor people, who can’t afford to buy water. There is no daily water supply truck here. How long have we been complaining of the same thing to this Makana Municipality and nobody cares,” said Matwa.

“Tankers come after a long time and they bring insufficient water. Most residents are poor and cannot afford to buy bottled water. People queue at a few houses that have water and their water bills are high, said Matwa.

In Extension 9 in Joza, where families have taps in their yards, residents said water went on and off without notice. On Wednesday they said it was the second day that they had been without water.

Nonkululeko Simayi, who has three children, said she doesn’t know what to do as she does not even have money to hire donkey carts. “I use the water I get very cautiously as I don’t know where I will get it next time. Maybe provincial or national government should intervene in Makana Municipality because our officials can’t address this,” said Simayi.

Municipal Director of Engineering and Infrastructure Services Asanda Madyibi-Gidana refused to comment. “May I ask you once again to channel your queries through to our central communications office,” she said. Water and sanitation manager Gubevu Maduna said: “ I am not in a position to assist you with anything if not doing it through that office.”

But spokesperson Yoliswa Ramokolo didn’t respond to questions. She has not responded to questions which were sent two months ago either.

Next:  A Cape Town teacher sexually assaulted a learner five years ago. He’s still teaching at the school

Previous:  It’s hard to get a disability grant if you have a mental illness