Makana municipality insists these toilets have been fixed and are in use. But there’s a padlock on the gate 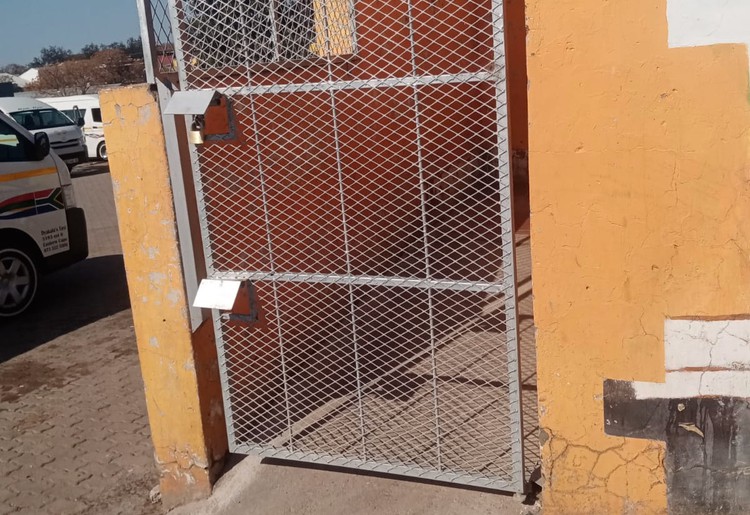 The Makana municipality claims these toilets “are in use.” Photo: Loyiso Dyongman

The Makana municipality claims the filthy toilets at the Queen Street taxi rank, used by drivers, commuters and vendors, have been repaired and are in use. But when GroundUp visited, the toilets were locked, and taxi drivers say they have been locked since early this year.

“The toilets have been refurbished and are now in use. There have been acts of theft and vandalism … Toilets have now been fixed and are operational,” said Ramokolo.

Asked to comment on the fact that the toilets are visibly locked, she did not answer GroundUp’s questions. Municipal Director of Engineering and Infrastructure Services Asanda Madyibi-Gidana said she could not answer either.

But users said the toilets had been a mess for a long time, with missing cisterns, broken toilet bowls and pipes.

Taxi driver Siyabulela Mekana said it was sad that the municipality had decided to lock the toilets. “These are the only public toilets in this area. Males are just standing by the walls and urinating and that is not right. It makes the town dirty and smelling bad,” said Mekana.

Monwabisi Mandleni, who said he uses the taxi rank everyday on his way home from work, said it is hard for the women who have stalls selling fruit and food at the rank.

“Just imagine these old women coming here every day early in the morning and staying for the whole day. Where do they relieve themselves? How are they going to afford going to the Market Square Mall toilets because they will have to pay R1, if not R2? They don’t have that money and that is why they are here selling fruit. It is better for men because they are able to go around the corner, stand there and relieve themselves.”

“The municipality should do something about this,” said Mandleni.

Nokwanda Femesi has been selling fruit at the taxi rank for more than 20 years. She said sometimes she is allowed to use the toilets at small businesses around the taxi rank. “They understand the situation that we are going through here and they are very warm and welcoming,” she said

Another trader, Nosakhele Mtshelu, said she sometimes used the nearby bushes to relieve herself. “But it is dangerous because anything can happen,” said Mtshelu.

Next:  Covid-19: A glimpse behind the scenes at Groote Schuur Hospital