Living between the railway lines in Philippi

Desperate backyarders have put up shacks between railway lines close to Philippi train station, in the hope of making a new life for themselves. But the Passenger Rail Agency of South Africa (PRASA), which owns the land, and the City of Cape Town plan to move them.

When GroundUp visited the area on Tuesday some people were marking out their plots with stones and wooden planks while others were putting up shacks. There were several dozen shacks on the property.

Nolimise Pama said she had marked out her plot. Her husband, who works as a deliveryman in Epping, would bring materials later, she said.

Pama said she occupied the land because she had no money to pay rent in Samora Machel, where she lives with her husband and his four nephews in a one-room shack.

“I have used all my money at home in Tsomo in the Eastern Cape, where I spent Christmas with my family,” said Pama.

After she had put up her new shack, she would be able to invite her children, who are at school in Tsomo, home for the school holidays.

Her backyard shack was too small for her, her husband and his nephews, she said.

“I can’t take off my clothes and wash up while my husband’s nephews are around. I must ask them to step out before I do so,” she said. “Before I and my husband make love at night, we must wait until they snore.”

John Young was sweating as he built his shack with planks and zinc sheets. He said he had been given leftover building materials to erect his own shack on the land. He has been living with his parents and three children in Samora Machel.

“I can’t stay at my parents’ place forever. My parents demand that I fork out cash for rent, water and electricity. I struggle to get money for those things and my parents complain,” said Young, who makes a living fixing damaged electrical appliances such as stoves and kettles. 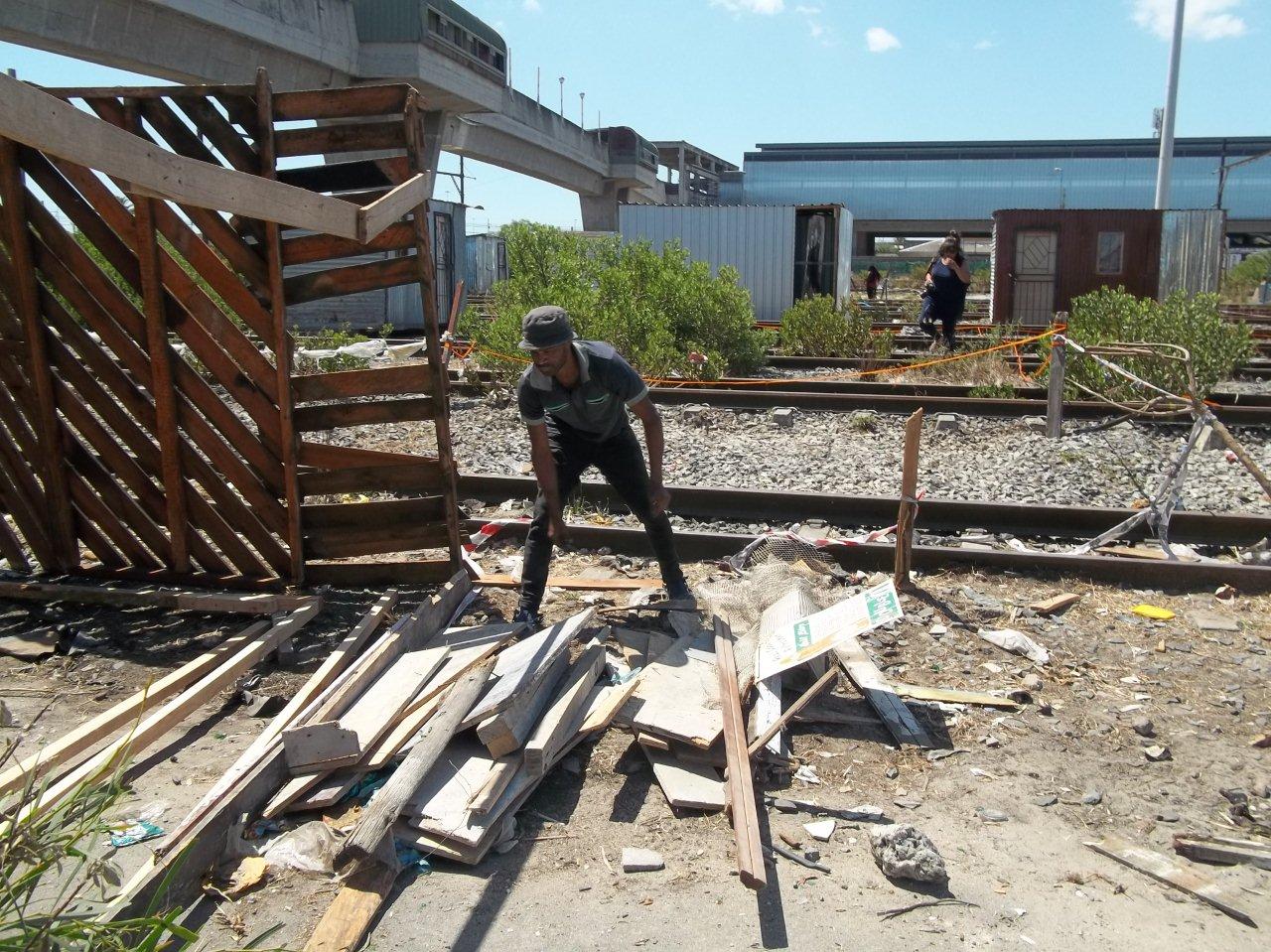 John Young wants to move out of his parents’ house. Photo: Vincent Lali

Nomfusi Fijoli rents a backyard shack in Samora Machel for R500 a month and spends R200 on electricity. She sells beads in Salt River and is paid on commission.

“I earn about R2,000 monthly when the year nears an end and business thrives, and about R600 when the year starts and beads sell slowly,” said Fijoli.

She said she spends R35 a day on taxis to and from work.

“The landlord doesn’t care whether I have got a good commission or not. He demands his money at the end of the month,” said Fijoli.

She said staying next to the train station would save her money. “I will buy a monthly train ticket and travel by train.”

She said living in her own shack on the land would enable her to enrol her daughter at college in Mitchells Plain. She would use the money she was spending on rent to buy food and clothes for her daughter.

Simamkele Tshezi marked out her plot and said she would bring her shack and her belongings today from Samora Machel, where she rents a space. She decided to move because she battled to find R350 for rent and R50 for electricity every month and the landlord planned to increase the rent to R350, she said.

She works as a charwoman in Wynberg on Saturdays, earning R200, which she uses to buy rice, bread, a bunch of potatoes, fish oil and bread to last her until the next Saturday.

“I eat just a few slices of bread and wash them down with Kool Aid before I go to bed at night,” said Tshezi.

She has to set aside R24 for travel to and from Wynberg on Saturdays.

Thandeka Ngxoko, who sells smileys and second-hand clothes in Tsunami informal settlement in Samora Machel, was filling a space between the rails with concrete before putting up her shack.

“I’m going to collect money from my customers, buy a shack and put it up here,” she said.

“I’m cramped with my three children in a small shack in Tsunami. There, shacks are so closely clustered that I can’t even extend mine,” she said.

“When I bath, my kids must stand outside even if the rain pours.”

She hoped to sell vetkoek, braaied sausage and cooked sheep heads to the new land occupiers, she said. 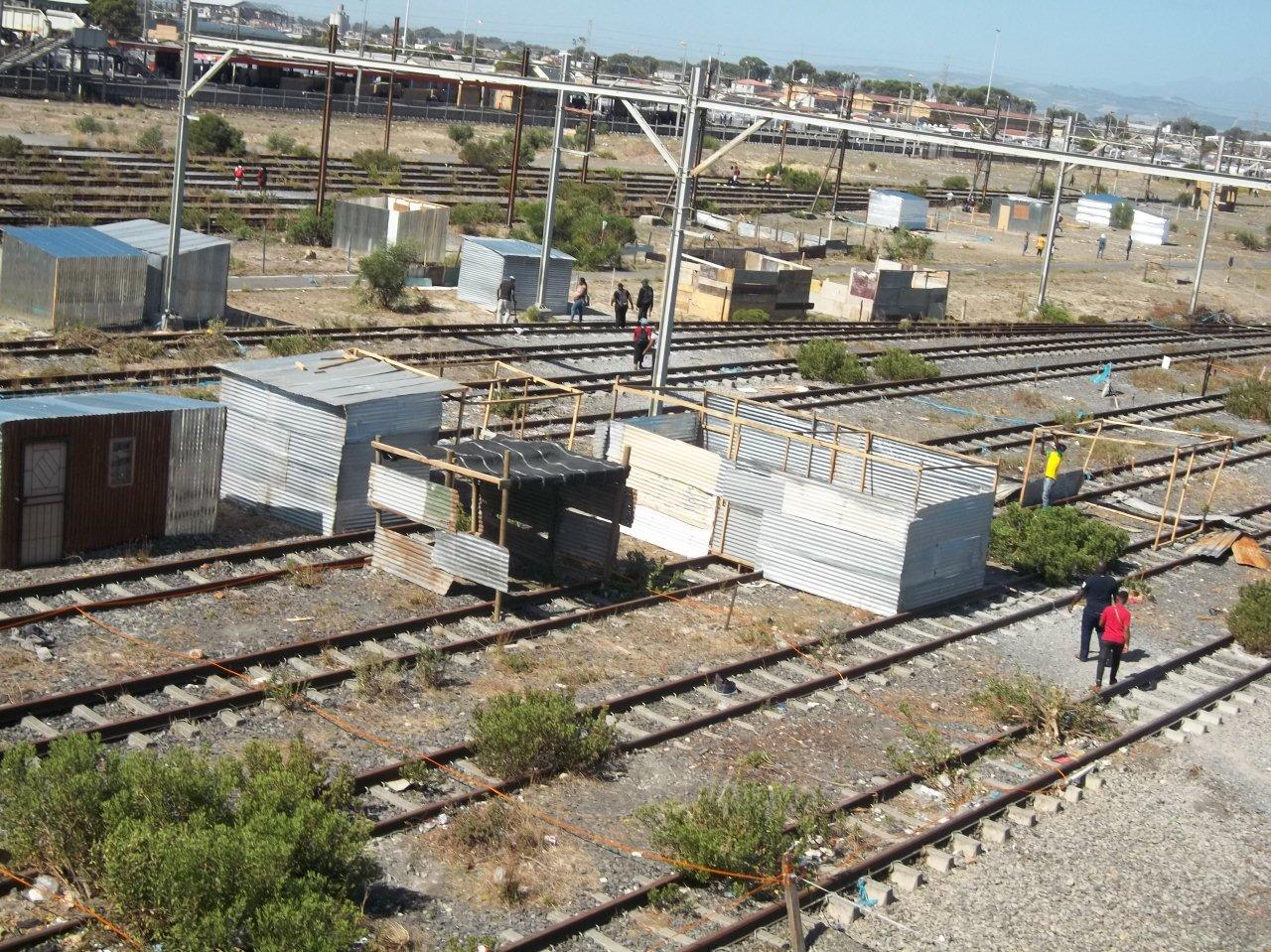 Several dozen new shacks have been put up on land owned by Prasa. Photo: Vincent Lali

But Malusi Booi, the City of Cape Town’s Mayoral Committee member for Human Settlements, said the City was concerned about the safety of the land occupiers and rail commuters. As a result, the city would help PRASA to remove the occupiers, he said.

Booi said: “The City has offered to assist with the dismantling and removal of the unoccupied structures due to the health and safety concerns that exist.”

“Although we absolutely understand the acute need for housing opportunities amid the great demand and space constraints that we are faced with due to our terrain and geographical position as a peninsula, we also must look at the health and safety aspects that could affect our residents,” he said.

PRASA spokesperson Riana Scott said the site was the old Philippi depot, which had been earmarked for modernisation.

“PRASA has previously successfully relocated households elsewhere in Khayelitsha,” she said, but relocation was a long process which depended on engagement with community leaders and the provision of alternative serviced land. PRASA was discussing this with the City, she said.

Next:  City counts number of occupiers in Woodstock Hospital