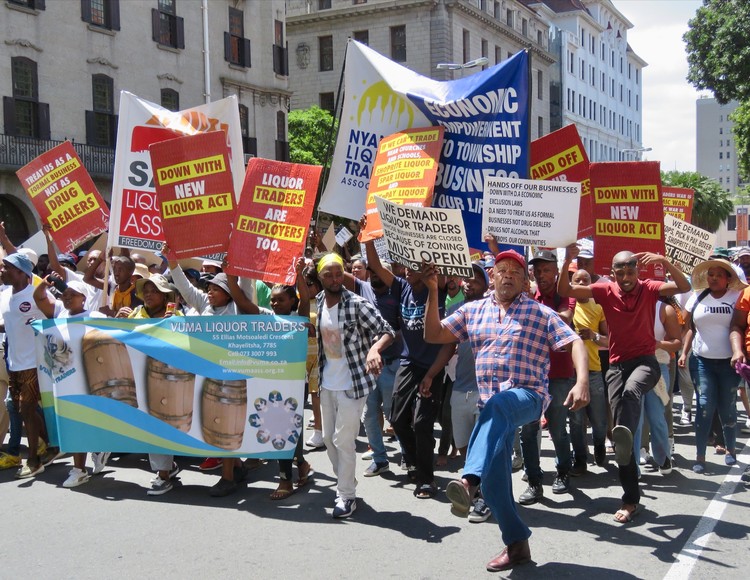 More than 200 members of the Western Cape Liquor Traders Organisation marched to the provincial legislature and Parliament on Wednesday. Photo: Masixole Feni

More than 200 members of the Western Cape Liquor Traders’ Organisation (WCLTO) marched to the provincial legislature and Parliament on Wednesday, to protest against what they claim is unfair treatment by police and government.

Unlicensed trader Mamthembu Mhlanga from Philippi, who has been running her business for more than five years, complained of police harassment.

“I am unemployed and a breadwinner so I depend on that money,” said Mhlanga.

Bamanye Languza, WCLTO secretary and a licensed liquor shop owner in Langa, said, “We have been embarrassed, ambushed and treated unfairly by the South African Police Service … They steal your money and they beat you up. Just yesterday an incident like this happened in Langa.”

“Some people have families to feed and they only manage to sell two cases of beer a day. Now imagine that little that you made for the day being taken and even if you go and report the incident, it goes nowhere,” said Languza.

Police have not yet responded to GroundUp about the allegations of harassment.

The protesters sang and waved placards with: “Treat us as a formal business not as drug dealers”, “Liquor traders are employers too” and “Hands off our businesses”.

The memorandum was accepted by provincial Minister for Police Oversight and Community Safety Reagen Allen.

Allen told GroundUp, “I maintain that at no point are we seeking to be a stumbling block to any liquor outlet, as they play a crucial role in our province’s economy, and job creation. It is however important to us that safety and compliance is ensured, as this helps with businesses running smoother and a safer environment for our residents.”

He said any liquor trader that sought to operate outside the regulatory framework would face the full might of the law.

He said, “The first quarter, April to June 2022, crime statistics for the 2022/23 financial year show us that incidents, directly linked to alcohol that occurred outside liquor outlets led to 16 people being killed, 170 being raped and 468 grievous bodily harm assault cases.”

Alcohol-related harm accounted for more than 7% of deaths in 2012, according to a study by the SA Medical Research Council, cited by online publication Spotlight.

Maurice Smithers, director of the Southern African Alcohol Policy Alliance (SAAPA), said liquor laws are generally just and fair though inadequate. The laws state they have two major purposes: to ensure that alcohol use does not cause social harm and to facilitate participation in the liquor economy.

“However, we would agree that the implementation of the law is often unequal. We would also argue that there is a need for a whole-of-government approach to dealing with the management of alcohol in our country,” said Smithers.

“Many people in poorer areas turn to selling alcohol as a way of making a living for both historical and current reasons. Under colonialism and apartheid, black people were banned from buying ‘white’ alcohol and prevented from producing traditional beer themselves, forced instead to buy it from municipal beer halls. In addition, apartheid laws sought to exclude black people from independent participation in the economy as a way of forcing them to work for whites. The consequence of these two factors was the emergence of ‘shebeens’ as a form of resistance against racist laws and as one of the few ways in which people could generate an income independently (taxis and spaza shops were the other main economic activity in the black community).”

“Black areas weren’t zoned in the same way as white areas. In white areas, properties were zoned for a variety of purposes – residential, commercial. Business, industrial, educational, religious etc. In black areas, most properties were only for residential purposes, once again because black people were not supposed to be involved in the economy in their own neighbourhoods, but were expected to travel to white areas for work.”

But, says Smithers, that “doesn’t mean that undoing the injustices of the past should mean that people can open alcohol outlets wherever they like”.

“Liquor outlets should, as far as possible, be restricted to business areas so as to avoid contributing to social harm in residential areas.”

Smithers said there was evidence that most people running small liquor outlets would prefer to be doing something else. “If that is the case, they must be assisted to transition to other areas of economic activity.”

“Reducing the number of liquor outlets in the country will not only assist in reducing alcohol harm, but it will also make the remaining liquor outlets more economically viable.”

SAAPA wants the apartheid zoning scheme scrapped and a general zoning policy applied across the country, and to restrict liquor outlets to non-residential areas; stop law enforcement from harassing traders, and rather assist liquor businesses to transition to other more socially-beneficial economic activities than criminalise them.

Smithers says getting a licence should not be overly easy or cheap, and liquor traders cannot be given a special dispensation when it comes to payment for municipal services.

Smithers said, “Laws apply equally across the board, but it is true that they are not always implemented equally. That’s what needs to change. They must be implemented properly and equitably and corruption in this regard must be rooted out.”

“Our experience is that people in communities across the country, especially those in precarious areas where there is an oversupply of alcohol, feel that they are powerless to do anything to protect themselves from alcohol harm, that they are held hostage by the anti-social behaviour of some traders and consumers, some complaining that they feel ‘bullied’ by such traders and consumers.”

Rebecca Campbell of the Western Cape Liquor Authority (WCLA) said it has a step-by-step guide to the application process of a liquor licence.

“Alcohol causes harm to individuals, families and communities, resulting in significant social, health and economic burdens on society. For this reason, the process to obtain a liquor licence is not simple and cannot be taken lightly,” said Campbell.

On average, it takes four to six months to obtain a liquor licence, should it be granted.

By 1 April 2023, online applications for licences will be possible.

She said the Liquor Licensing Tribunal, a quasi-judicial body mandated to consider applications, may not grant a licence unless they are satisfied, on a balance of probabilities, that the granting is in the public interest.

It considers “the suitability of the applicant and premises, potential negative impact on the local community (residents, school learners, patients in an institution for drug or alcohol-related dependencies, congregants of religious institutions), right of occupation for the premises, and proximity to a petrol service station”.

“The challenges experienced in obtaining appropriate zoning are complex, especially in residential areas where the majority of residents have objections to the granting of liquor licences within their residential area,” said Campbell.

Next:  Army of fake companies used to defraud the Lottery