Dozens of learners of Solomon Mahlangu High and Aston Gontshi Primary schools protested over a collapsed bridge on Jabavu Road in KwaNobuhle, Uitenhage, on Friday afternoon.

In August 2018, GroundUp reported on the bridge which collapsed 14 years ago. It is over a half-kilometre walk across rugged, vacant land from KwaNobuhle to the Solomon Mahlangu crossing where the bridge has collapsed. To walk using the nearest existing bridges is two and half kilometres.

Learners say they are attacked on their way to school by criminals who hide in the bush.

It was an unusual protest in which learners from the two schools sang songs. They sang until it started drizzling. One of the songs was Ngena Nowa (Come in Noah).

Booi said: “On numerous occasions, I did receive letters from Solomon Mahlangu High School complaining about crime at the bridge. They even gave me pictures of learners who had been stabbed by criminals who lurk in the bush in this area.”

“When we put a security guard to watch those who cross the bridge, he was also robbed and beaten, like learners,” said Booi.

She said the municipality had R700,000 for the bridge but it was insufficient. “They said they need millions.”

The protest was lead by the Makhukhanye Rural Movement. Chairperson Phumla Runeli said: “We are here to demand a new bridge.”

Grade 12 Solomon Mahlangu learner Sinethemba Ntotho said: “I stay in Khayelitsha and sometimes I can’t cross [the river bed] when its full of water.”

Daaminds said an urgent meeting will be convened on Monday with the stormwater drain directorate, the councillor of ward 44, and the roads and transport executive director. 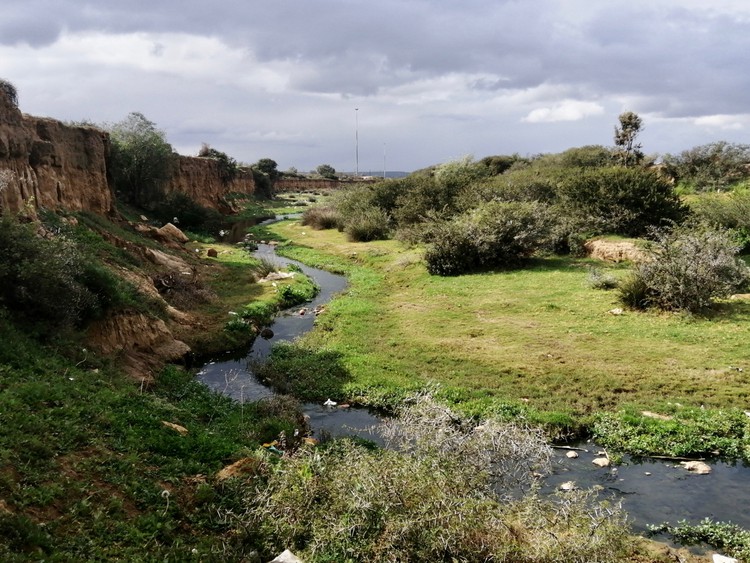 Learners from Solomon Mahlangu Secondary School in KwaNobuhle, Uitenhage, have to cross this river to get to school. The bridge collapsed in 2005 and it has never been fixed. Photo: Thamsanqa Mbovane

Next:  Claremont Mosque calls for religious leaders to respond to Cape Flats violence

Previous:  Child dies in shack fire while mother was out keeping neighbourhood safe