Land occupiers rebuild shacks next to the N2, burn tyres and rubble

Land occupiers who built shacks next to the N2 and burnt rubble and tyres on the highway said they were sending a warning to private security company Vetus Schola not to demolish their shacks.

Meanwhile Nomzamo Primary School in Strand had to send learners home just over an hour after school started because of the protest action.

Since Friday afternoon 49 shacks have been built by the land occupiers on the ASLA- owned land which they have been trying to occupy since April. The demolitions by the Red Ants and private security in the past led to protests, with the police using teargas to disperse the crowd. Nomzamo Primary is less than 20 metres away from the occupied land and the teargas would reach the school, affecting the learners.

Our people are genuine about their struggle and we will not loot shops or burn property.

One teacher confirmed that they had received complaints from the parents and they were not taking any chances. “A communique was sent to the department about the plan to take out children should anything happen on that land.”

GroundUp went inside the school and saw the children leaving the premises. But the Western Cape Education Department denied that classes had been cancelled. Director of communications Bronagh Hammond said: “The WCED has received notice from the schools about the protest action. Learner attendance has been affected. The schools, however, have not closed and are continuing to operate. They are monitoring the situation and will act in terms of the safety of all concerned.” 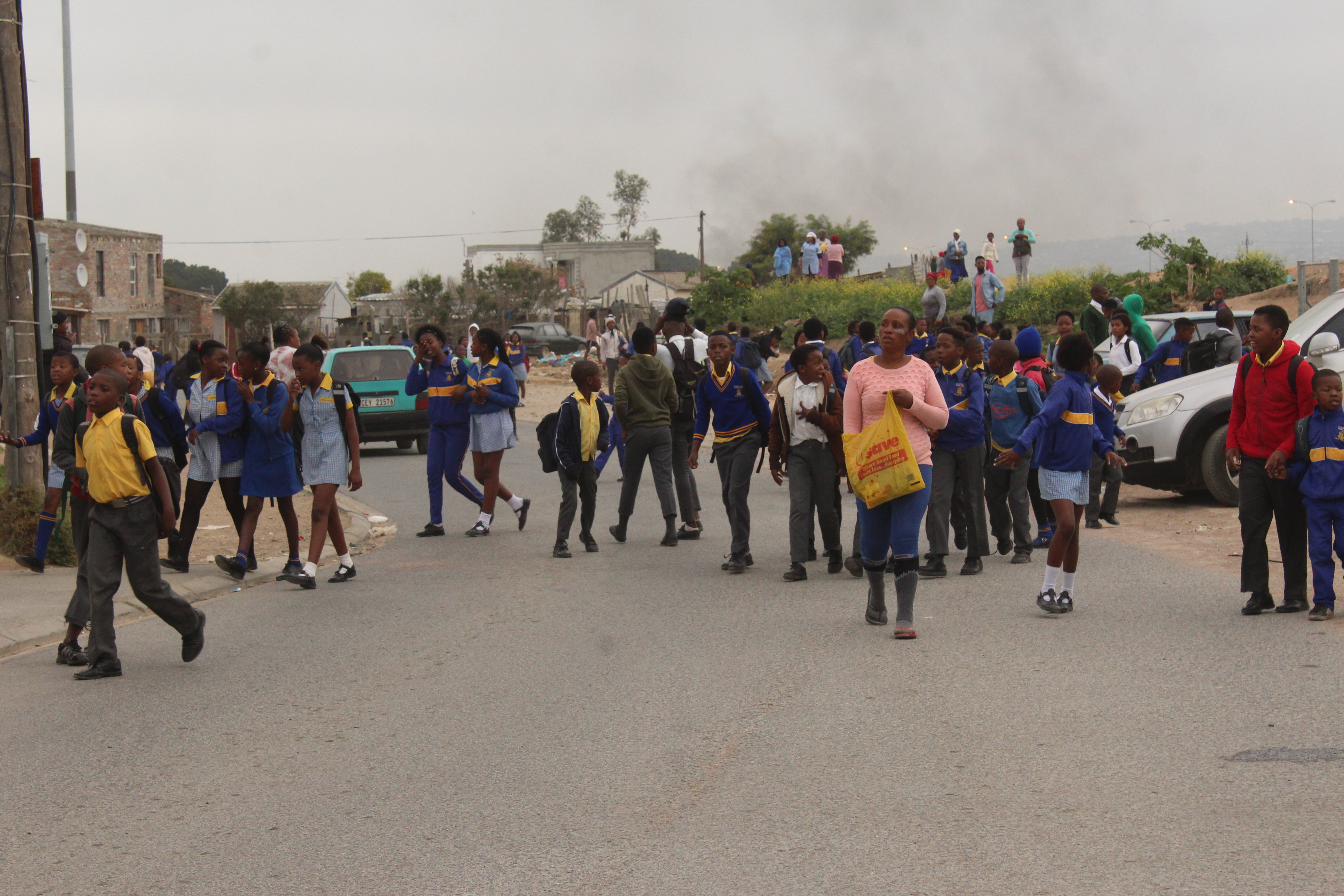 Nomzamo High School, which is situated next to Nomzamo Primary, did not cancel classes but learners did not come to school when the burning of rubble on the N2 started.

Vuziyalo Madolo chairperson of Sinqawu-nqawu, the newly formed settlement, said the residents were not going anywhere. “ASLA has a court interdict that allows them to prevent any occupation on this land. We have been here for more than 48 hours and they will need an eviction order if they want to remove us from here.”

Madolo said they had been alerted that the private security company would try to demolish the shacks. “They must think twice before coming here to demolish our shacks without a new court order.”

The shacks have beds and equipment. Many shacks are missing windows and ceiling boards have been used as covers in the meantime.

Law enforcement officers , the public order police, and Sinqawu-qawu residents reached an agreement to reopen the road and keep private security at bay. Traffic started to flow again after the agreement and private security left while a few police officers kept an eye on the crowd from their cars.

Madolo said the leaders of the land occupiers were against looting, destruction of property and xenophobia. “There are people who are waiting for rubber bullets to fly so they can run inside the community and loot shops. Our people are genuine about their struggle and we will not loot shops or burn property. We want to put it on record now because we have been wrongfully judged by many in this community.”

The residents have been living at community halls since the earlier demolitions of their shacks.

Next:  Wits students join protests against violence against women

Previous:  Two people dead in a stampede as shops are looted