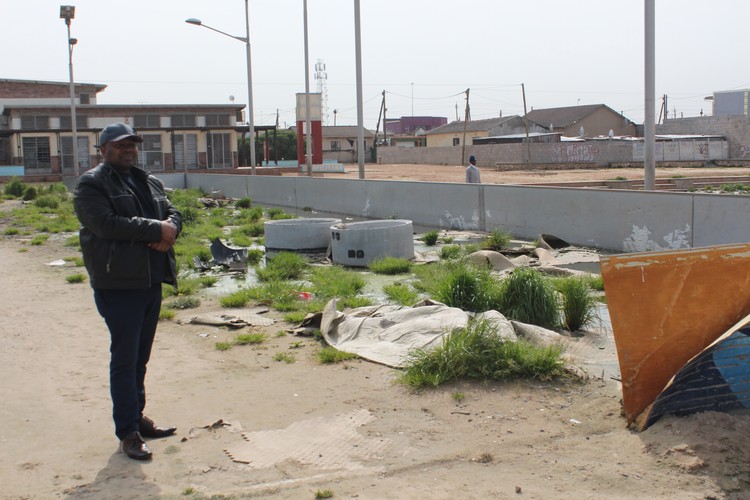 Ward councillor Anele Gabuza stands on what was remains of the once lush green soccer pitch in Harare, Khayelitsha. The pitch, built during the 2010 FIFA World Cup, is completely destroyed due to intermittent sewage spills. Photo: Mary-Anne Gontsana 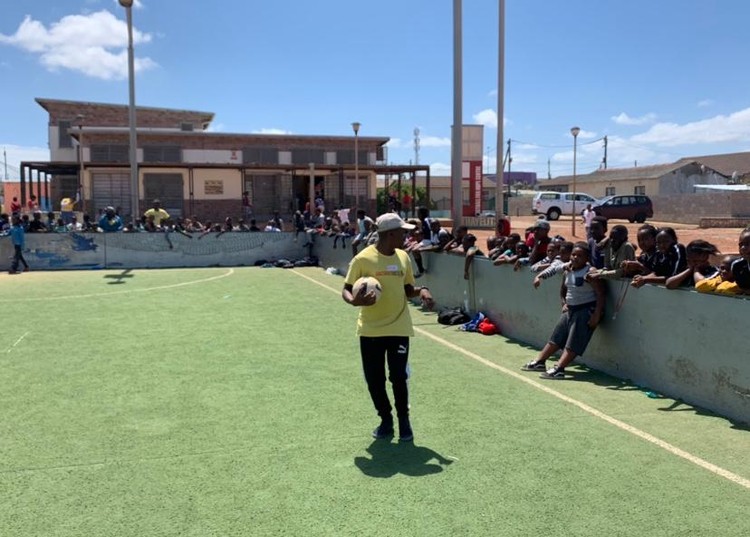 This photo taken in early 2020 shows what the soccer pitch in Harare, Khayelitsha looked like before it was damaged by overflowing sewage and rubbish. Photo supplied by: Vuyolwethu Kayi

An all-girl soccer club in Khayelitsha, Cape Town has closed because the soccer turf where they train is dilapidated due to intermittent sewage spills.

Vuyolwethu Kayi coaches the junior football team of the Resilient and Victorious United Women’s Football Club (RV United). He said the soccer field frequently floods with sewage, causing the pitch to deteriorate. The teams can’t train for matches and are struggling to get another space in the community.

The soccer field is situated at the Violence Prevention and Urban Upgrading (VPUU) site in Harare. It was built during the 2010 FIFA World Cup by non-profit organisation, Grassroots Soccer South Africa. But due to funding challenges, Grassroots handed over the facility to the City of Cape Town, Kayi said. (We’ve been unable to contact Grassroots.)

He said their trouble started once work on sewage in the area started nearby. “The City promised to fix it by the end of July, but we are in September and nothing has been done,” said Kayi. Training has not resumed since the first Covid lockdown in 2020.

Ward councillor Anele Gabuza showed this reporter how flooded the space still was. There was a foul smell in the air and if Gabuza did not point out the space, it would be difficult to know that it was once a hive of activity for the youth in Harare.

“The main problem is with the sewage because it causes flooding and damage. This area used to be so beautiful and clean. The soccer field had green grass, fencing and it was being used by the youth for their soccer matches. Now there is nothing,” said Gabuza.

Patricia van der Ross, Mayco Member for Community Service and Health, said the area acts as a stormwater retention pond. “The cause of the flooding is a result of foreign objects in storm water pipes such as clogged sand, stones and many other objects that block the flow of stormwater.”

If true, it would be hard to understand why a city-backed project like the VPUU would be built on a stormwater retention pond.

But Zahid Badroodien, Mayco Member for Water and Sanitation said the overflow “had no bearing on the condition of the soccer pitch”. He said the soccer pitch was already partially affected by construction in the area.

Van der Ross said the soccer pitch would be replaced once funding becomes available, but did not indicate when this is likely to happen.

This is why sports facilities are built on retention ponds

I have a comment on the question asked in this article: "It would be hard to understand why a city-backed project like the VPUU would be built on a stormwater retention pond".

There is a very good reason why sports facilities are built on retention ponds: it's called multi-functionality.

It is simply a waste of money (and space) and very outdated to build single-purpose infrastructure such as a retention pond (actually called a detention pond, for the stormwater is detained during peak rain events for 3 to 5 hours, whereafter the pond should be dry again). They are never constructed to detain water for 10 to 12 hours or days. It usually has a herringbone drainage system (under the lawn area) connected to the conventional stormwater system. There should be no sewage spills on the lawn area and the fact there is simply indicates a reticulation problem. Unfortunately, reticulation issues are always visible at the lowest (topographical) point, hence the spills in the detention pond (and our urban waterways).

My point is that multi-functional spaces such as sports and recreational facilities (not structures) within detention ponds are space and cost-effective. It would help if the various line departments within the CoCT could also work together regarding maintenance.