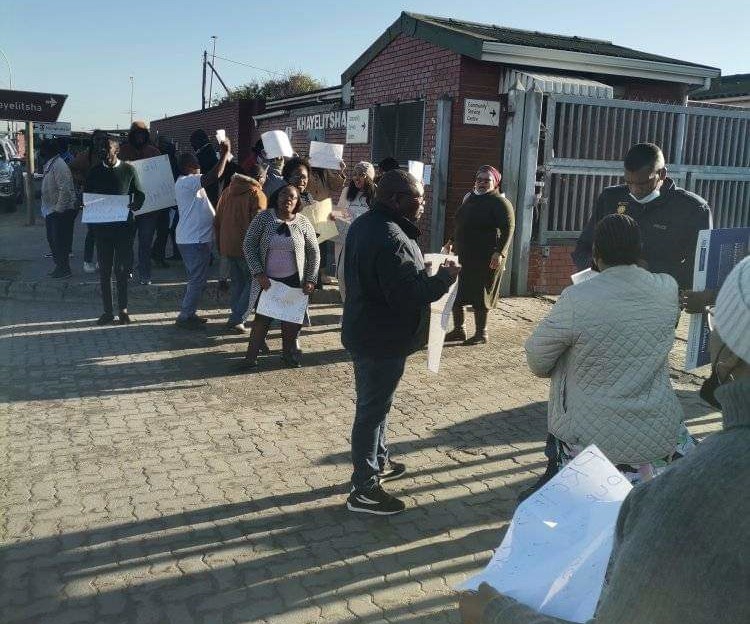 Mostly women teachers picket outside the police station in Khayelitsha demanding that police increase patrols in the area following a spate of robberies around the school. Photo: Supplied

Teaching at Matthew Goniwe Memorial High in Khayelitsha, Cape Town was brought to a standstill on Monday as teachers, mostly women, marched to and picketed outside the police station on Monday. They are demanding that police take action against increased levels of crime around the school.

The teachers want the police to increase patrols, especially when they are leaving the premises. They say they no longer feel safe because criminals, some of whom are learners at the school, are targeting them.

School governing body member Chris Gqogqa said they had reported several incidents over the last few months. He accused police of “dragging their feet” when it came to investigating and resolving these cases.

When GroundUp visited the school, a teacher who had been robbed two weeks ago was being comforted by a parent. “I don’t want to be here. Being at school brings back the trauma,” said the teacher to the parent.

Gqogqa told GroundUp that the teacher had managed to identify the criminals, one of whom is a learner. “Most of these robberies are smash and grabs at the robots not far from the school. Sometimes they rob teachers as they walk outside the school and grab their bags. The sad part is they target female teachers,” he said.

Police spokesperson Frederick Van Wyk confirmed that teachers have complained about robberies in front of their school and at Japhta K Masemola road en route to school.

He said police are currently investigating a case registered on 12 May where a teacher was robbed of her bag and cellphone. She identified a learner as one of the four suspects. “Four suspects were arrested and appeared in court. They were released on parental custody as they are juveniles,” he said. The matter will return to court on 14 June, he said.

Western Cape Education Department spokesperson Millicent Merton said the teachers’ visit to the police station on Monday follows a meeting the school had with senior police officials some time ago over safety.

Teaching at the school has resumed and a meeting between police management, the school governing body, teachers and parents will take place soon.

Next:  Making a little money from filling in potholes