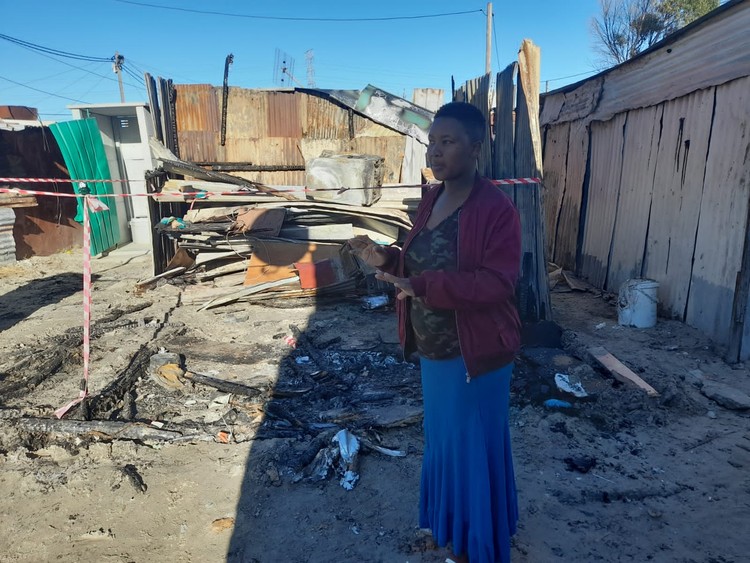 Khayelitsha resident Pozisa Gqomfa points out where the bodies of four of her relatives were found after the shack they were sleeping in caught alight on Sunday morning. Photo: Nombulelo Damba-Hendrik

Four family members and their friend died tragically when the shack they were sleeping in, in France Informal Settlement in Site B, Khayelitsha, burnt down in the early hours of Sunday morning.

Gqomfa said she was just a few metres away at the time when neighbours saw the shack alight. “I felt so helpless. I tried to go closer but people grabbed me, preventing me from getting closer to the shack. I stood there watching the blaze kill my family,” said Gqomfa.

“We were all sitting together with other neighbours having fun. My aunt was a fun person and full of jokes, most people liked her. My aunt went to bed before us. Some people said they heard my aunt screaming for help but the fire started near the door and they could not open it,” she said.

Nosiphiwo’s husband Mbuyiselo Tafeni, 59, said he was asleep in his house about a kilometre away and that they have been separated for two years. “I was woken up by a group of people telling me that there’s a fire. The people were so angry accusing me of killing her. They started swearing at me, some pushing me. Fortunately there were police. Let’s just say I’m lucky to be alive,” he said while holding back tears.

He said Nosiphiwo ran a crèche from his home and that he had a very good relationship with his grandchildren too. “It breaks my heart that people would suspect me of killing them,” he said.

The City’s Fire and Rescue Service said the fire was extinguished just after 5:20am. Police are investigating the incident.

Next:  Mbalula tears into PRASA management

Previous:  Court rules on the limit of the Human Rights Commission’s powers