On a humid February afternoon, 40-year-old Michael Machine pulled a trolley laden with large bags of recyclable plastic along a gravel path on the edge of the Braamfontein Spruit, a leafy park in the affluent Johannesburg suburb of Sandton.

Machine is one of about 70 waste pickers, mostly from Lesotho, currently living in a shaded corner of the spruit. Their temporary tarpaulin-covered structures are surrounded by large piles of plastic bottles, broken down cardboard boxes and aluminium cans.

Machine moved to South Africa in 2003, leaving behind a security job in Lesotho that he says paid only R300 per month. Struggling to pin down regular work in Johannesburg, he started reclaiming recyclable waste in 2009. “There were no other jobs available,” he says.

Every Saturday, Machine takes his week’s haul of recyclables to a depot in Alexandra, which he says takes him almost three hours each way. In a good week, he might make R600 for his troubles, most of which he sends back to Lesotho to support his family. “It’s difficult work,” he says. 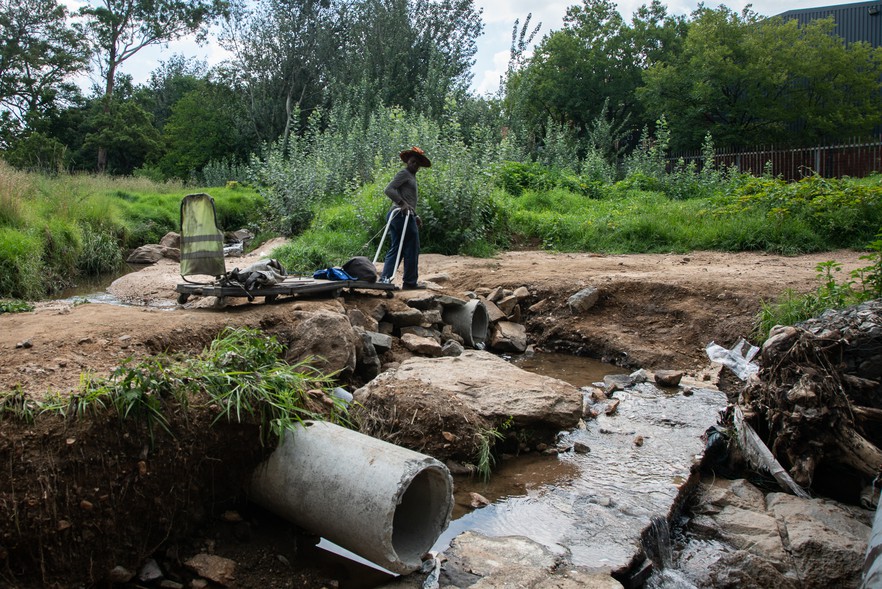 Michael Machine heads out to collect recyclables with his trolley.

Professor Rinie Schenck, who researches waste management at the University of the Western Cape, has previously told GroundUp that waste pickers like Machine recycle as much as 90% of the recyclables collected from South African households, saving up to R750 million in landfill space every year.

But despite this significant contribution, Johannesburg’s waste pickers face routine harassment, discrimination and eviction by City officials and Johannesburg Metro Police Department (JMPD), according to local NGOs and pickers interviewed by GroundUp.

“A lot of people don’t like what we are doing. They think we are criminals because our clothes are dirty,” says Machine, who begins trawling the streets at about 4:30am most mornings.

“Waste pickers often get evicted from open land or next to complexes, being accused of causing crime in those areas without any evidence,” says Vanessa Pillay, of an NGO called WIEGO that advocates for people in the informal economy. She says that pickers’ materials and belongings, including ID documents, are regularly destroyed during evictions and raids.

“The police often come and burn and destroy all our things,” says David (name changed), another of the Basotho men living at the Braamfontein Spruit. Having had his passport destroyed in one such raid some years ago, David claims he has twice spent three-month stints in Lindela, the notorious detention centre for undocumented migrants. “It’s not a nice place,” he says. “People are dying inside there.”

David also claims he spent almost two months in Sun City prison in 2016 without being charged after he was arrested for a minor altercation with another waste picker. 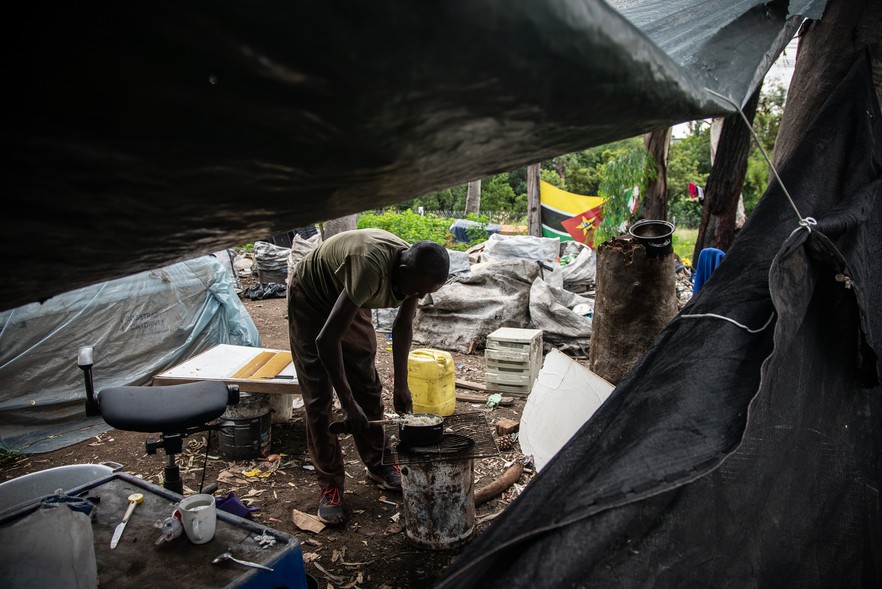 A waste picker prepares some food at the makeshift camp on the edge of Braamfontein Spruit.

According to Lisa Lowenthal, whose community project SkeemSaam is trying to forge better relationships between waste pickers, local residents and City officials, there is an aspect of xenophobia to the plight of Johannesburg’s waste pickers. “Because many of them come from outside of South Africa, there’s a lack of will to find meaningful solutions,” she says.

Martin Evans, a property developer and town planner who owns a business near the spruit and has also sought to build a partnership with the waste pickers, said that the problem is compounded by a “lack of understanding” from surrounding communities, who often perceive the pickers as a threat.

But for Pillay, the plight of waste pickers is about what she calls “the criminalization of poverty” in Johannesburg. In recent years, the City administration has taken flak for a number of initiatives that have sought to secure the safety of the inner city by arresting or removing informal street traders, hawkers, beggars and vagrants, as well as waste pickers.

“It’s really about wanting to clear poor people out of public space, wanting to push poverty into oblivion,” Pillay adds.

Wayne Minnaar, spokesperson for Johannesburg Metro Police Department (JMPD), says that he “cannot support” the burning of waste pickers’ belongings and that this was not part of the JMPD’s modus operandi. However, he said that his department has to “act when there is an obstruction” in public spaces such as Braamfontein Spruit.

In June last year, Nico de Jager, the City of Johanesburg’s Mayco Member for Environment and Infrastructure Services, said that waste pickers would be registered on a formal database and provided with gloves, trolleys and inoculations as part of an effort to include them in the City’s recycling initiatives and better regulate the industry.

After protracted negotiations with WIEGO and the African Reclaimers’ Association, the registration process finally began on 4 February. According to Pillay, more than 1,000 waste pickers have already been registered.

“It’s a step in the right direction, but then all of the other policies have to follow that,” says Pillay. She says that the City can’t be having “a conversation about the value of the waste pickers’ public contribution” and “be evicting people almost every day.”

The need for inclusive and multi-faceted approaches to waste management is a pressing one in a city that only has an estimated six years of landfill space left. But Johannesburg mayor Herman Mashaba has continued to come under fire this year for his sharp anti-immigrant rhetoric and for initiating a wave of raids and evictions that have affected inner city-residents, including waste pickers.

Pillay says that when WIEGO first began negotiations with the City about integrating waste pickers into its recycling initiatives, the City only wanted South African ID holders to be eligible for registration and equipment.

The City could not be reached for comment on this article. 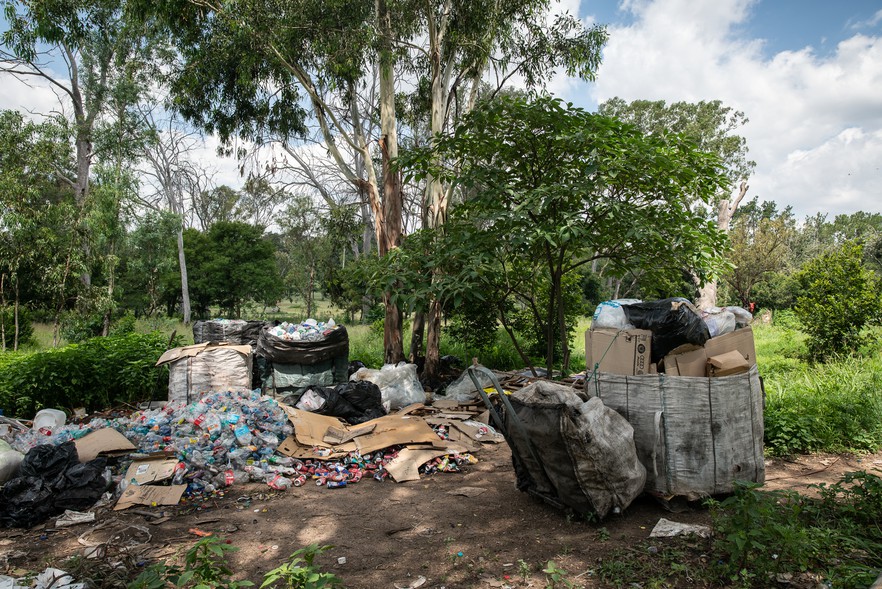 Piles of plastic, cardboard and cans for recycling surround the perimeter of the waste pickers’ camp on Braamfontein Spruit.

Pillay, Lowenthal and Evans all agree that resources could be better used providing the waste pickers with formal facilities where they can store their recyclables.

“They have to accumulate volume to be able to make any money out of the recyclables,” says Pillay, “so they need safe places where they can work and then safely store the recyclables.”

Back on the spruit, another waste picker called Paul (name changed) returned from a long morning’s work, requiring a colleague’s help to get his heavily-laden trolley up the hill to the waste pickers’ makeshift camp, where he has been living for three years.

Paul used to live in an RDP house in Honeydew, but it would take him almost an hour to get to the spruit and his transport and accommodation combined was costing him about 40% of his monthly earnings.

Paul says the police have raided a number of times since he started living on the spruit. He believes more raids will come. “They normally like to come around July,” he says. “They burn all our things, including our clothes and IDs. But we have nowhere else to go.”

Paul hopes that this will be his last year doing waste picking. “It’s not a good job. A lot of people don’t appreciate what we are doing for them, and I often get sick from the waste,” he says. “I need to save R10,000, then I can start afresh somewhere else. Maybe I will start a business back in Lesotho.”