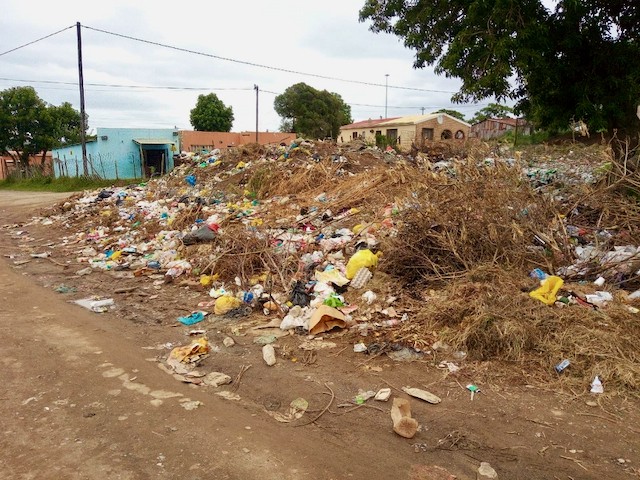 One of over 100 illegal dumping sites that have been plaguing communities in Makhanda for years. Now the High Court has given the Makana Municipality 120 days to clean up the city. Photos: Loyiso Dyongman

The municipality was also ordered to pay the costs of the application brought by Ezihagwini Street Committee from Extension 6 and Mary Waters High School, situated on the Andrew Heemro Road.

The applicants said the municipality had failed to remove refuse and to put an end to illegal dumpsites in some parts of the town for years.

On Wednesday, Cameron McConnachie, from the Legal Resources Centre (LRC), who represented the applicants, said, “We welcome the clear and comprehensive court order. Our clients look forward to reclaiming a living space that is not an affront to their dignity or their constitutional right to an environment that is not harmful to their health and well-being.

“We are under no illusions – this is going to be a long process and will require a vigilant community and dedication from municipal officials.”

McConnachie said the LRC first wrote letters of demand to the municipality in 2019, and then launched the case in 2020.

The municipality was also directed to provide three refuse plastic bags to each household per week within 14 days of the court order.

Judge Brooks declared that the municipality’s by-laws and waste management system in Makhanda were unconstitutional, to the extent that they failed to protect and fulfil the residents’ rights to an environment that is not harmful to them.

The court has given the municipality eight months to review its by-laws and waste management plans to ensure it complies with the National Environment Management Waste Act.

Municipal spokesperson Yoliswa Ramokolo said the municipality had identified 117 illegal dumping sites during an environmental audit with the Department of Environmental Affairs (DEA).

“According to our door-to-door survey and education and awareness campaigns in collaboration with DEA and Rhodes University, we have identified that most communities do not adhere to dates and times to take out refuse. Some take it out in the afternoon after work and some on wrong days or every day, hence we see lots of illegal dumping,” said Ramokolo.

She said the municipality experienced mechanical breakdown of trucks and vehicles. The municipality was busy distributing refuse bags to the communities, Ramokolo said. A front-end loader was tackling up to two dumping sites a day. Waste containers for non-domestic waste were cleared once a week.

She said residents and the municipality had an equal responsibility to ensure a clean and healthy environment.

Previous:  Lottery made accusations against our reporter. Now it can’t back them up