A number of residents in Zweledinga informal settlement in Khayelitsha spent the weekend out in the cold after the City of Cape Town demolished their shacks and confiscated their building materials.

“We have been enduring the cold and sleeping outside next to fires since Friday night,” said Phumelela Masimini. “We go hungry because we can’t cook and endure the cold coming from nearby beaches. What will we do when it rains?”

Her home was one of nearly 40 shacks demolished at the weekend. The demolition by the City’s Anti-Land Invasion Unit, with assistance from law enforcement officials, was carried out over three days following a court order prohibiting people from occupying the City-owned land.

Thembela Nteye said, “It broke my heart to see them load my building materials on their truck and leave.” Nteye said that he still owed the vendor in Town Two, where he bought his building materials, about R5,000. “I don’t know where I will sleep or get money to buy materials to rebuild my shack because I don’t work,” said Nteye. He said other appliances such as his stove and heater were damaged during the demolition.

Nteye previously lived in a one-room shack in Enkanini with his sister, her husband and three children. “My sister and I couldn’t undress and wash while her kids were around. We had to ask them to stand outside when we washed, even if it was raining,” he said.

Nosimele Nguta said she moved onto the land with her husband and their three children last Monday. They previously rented a shack for R600 per month in Enkanini before both her and her husband lost their jobs.

When GroundUp arrived on Sunday, Nguta was frantically moving her belongings from her home as officials moved closer, tearing down her neighbours’ shacks. Her belongings were among the piles of groceries, blankets, beds and other furniture scattered on the ground.

She said her shack was demolished three times since Friday.

Nguta said: “After they demolished my shack the second time, I phoned my brother who stays in the Eastern Cape and he borrowed me money. Members of my church stepped in and gave me building materials.”

On Sunday, residents told GroundUp that tensions were running high and some scuffles broke out between occupiers and law enforcement officials. Residents alleged that an officer beat up Sinethemba Dingane, 29. When we arrived, Dingane’s bottom lip was still bleeding.

“Before the officials attacked me, they heard me call out residents and urge them to gather in one place to discuss the shack demolition and our next move,” said Dingane.

“They pulled me out of my shack and shoved me to the ground before they kicked me with safety boots. My mouth, head and back ache now,” he said.

When questioned about the incident, the City said the question should be sent to the police along with “the necessary evidence for investigation”.

On the demolitions, Councillor Malusi Booi, Mayoral Committee Member for Human Settlements, said, “The Court granted a final order to the City to prevent the illegal occupation of the land. The City’s Anti-Land Invasion Unit removed unoccupied and unfinished structures inline with the law and based on advice from legal professionals.”

Booi warned that illegal occupations were not “mechanisms to jump the housing queue or to guarantee services ahead of others who have been waiting for services. The City prioritises planned projects”. 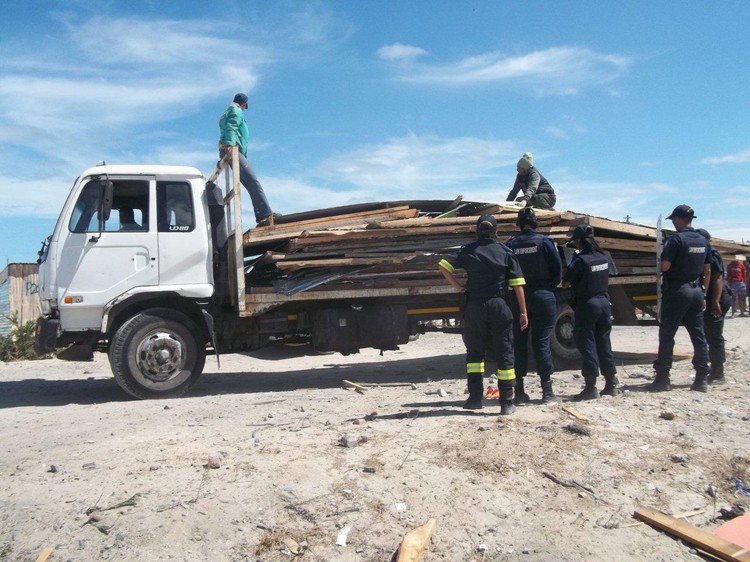 Next:  Covid-19: Universities across the country close

Call for Israeli embassy in Pretoria to be closed