Despite new Post Office system, snaking queues are the norm in Port Elizabeth 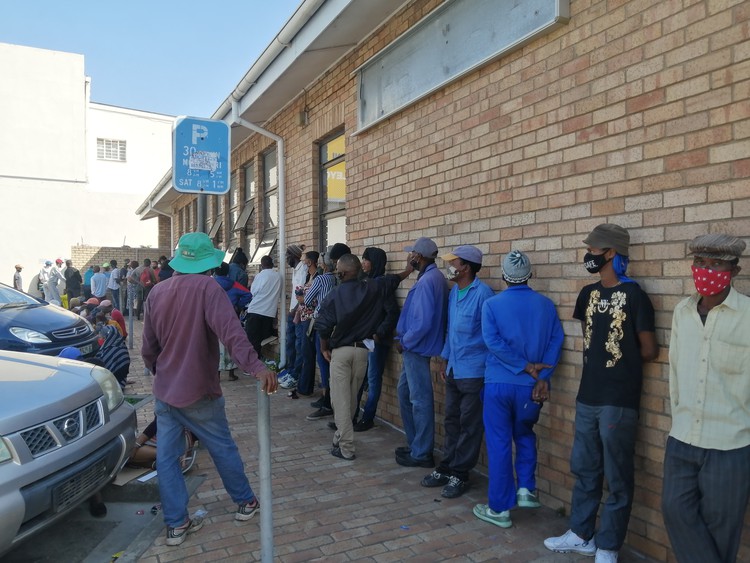 Beneficiaries waiting in line around the building near the post office on Commercial Road on Friday. Most people are there to check on the progress of their special Covid-19 grant applications. Photo: Mkhuseli Sizani

Scores of frustrated R350 Covid-19 grant beneficiaries queued outside post offices in Nelson Mandela Bay on Friday. This despite earlier warnings by staff and security to not visit the paypoints unless they received an SMS confirming that their money is available.

Many people we spoke to said that visiting the post offices appears to yield more success in being assisted than waiting at home. On Friday morning, we visited the post offices in Commercial Road, Algoa Park and Ziyabuya Shopping Centre in KwaDwesi. At each one, there were snaking queues with very little physical distancing. While people did wear masks, not all of them were worn correctly.

Most people said they arrived at 5:15am but were assisted soon after the post office opened due to the new booking system. This system, they said, prioritises people according to the last three numbers of their IDs. So for this morning, people whose IDs ended with 082 and 087 were served.

At Ziyabuya Post Office, beneficiaries there said they were frustrated with the new ID booking system. More than 300 people were still standing outside by 11:30am.

Lulamile Ntondini of Soweto-on-Sea has been applying for the special R350 Covid-19 grant since June to no avail. He said it was his fourth time visiting the office to check on the progress of his application.

“I have tried all the tricks that other beneficiaries who have received their grants used but with no success. I was advised by other beneficiaries to make applications through different cell phone numbers and to keep coming to check for my money at the post office,” he said. On Friday, he was again told to return next week.

The father of two said he desperately needed the money to buy food for his children. “The last time I had a job was in 2018. Since then I have been depending on my mother’s old age grant,” he said.

Mawande Ndlendle, 38, of New Brighton joined the queue in Commercial Road to enquire about the application she made three months ago. “My application keeps saying it is pending. I have three kids at home and I need money to buy them food. Hence I decided to come here to check for my money.”

SASSA responded to our questions after publication. Provincial spokesperson Luzuko Qina confirmed that the system has changed. said. He said the Post Office has found a “simpler solution to manage the crowding at its outlets”. He said at first they introduced an SMS system followed by a booking system. “And now the last three digits of the identity document.”

Qina said this last approach had assisted in many areas across the country, while in some areas a “dual approach is being implemented”.